One day from the life of the writer Roza Muqanova. PART I 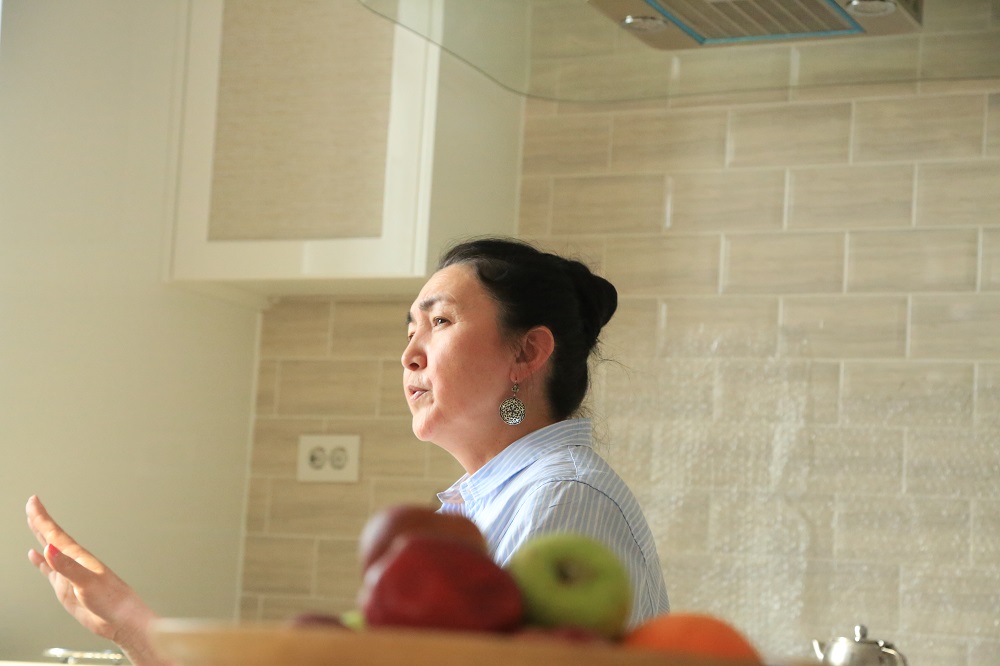 We usually call it a "star" and keep track of what the singers-artists have done or what they have done - eating or drinking. But why do not we forget the writers who suffer from the writer's pain and have a heavy mind, who are hanging around the table at night and in the archive's dust? Has not the latter been more useful to the people than the first ones? Here is the beginning of our new episode "ONE DAY FROM THE LIFE OF THE WRITER" under the influence of this idea. How do writers spend their time? Where does it go When does the recording go? When does a book read? What is the power that has made them so successful?
Looking for answers to these questions, one of the best days of Astana, we went to the home of famous writer, playwright, laureate of the International Alash Literature Prize, Roza Muqanova.
We go back a bit later than we said. The writer is a writer, and we are afraid to say, "What are you waiting for?" Both literary works of Akim-aga and Roza-apa were familiar for me from my childhood. It's not unreasonable that I am afraid of Akim-aga, who is in absentia with Roza Apai. Finally, we went to the door and started the doorbell. No, it was not what she thought, but the sounds of her sister's voice were heard.

The Akim-aga (Akim Tarazi) was the one who waited for us without giving us a breakfast.

He made a delicious porridge.

Our conversation over the morning tea started with memories of Fariza-apa (Fariza Ongarsynova), who became the clergy of the poet's world, and focused on the literature. We asked Roza-apa for what she was writing now.​ 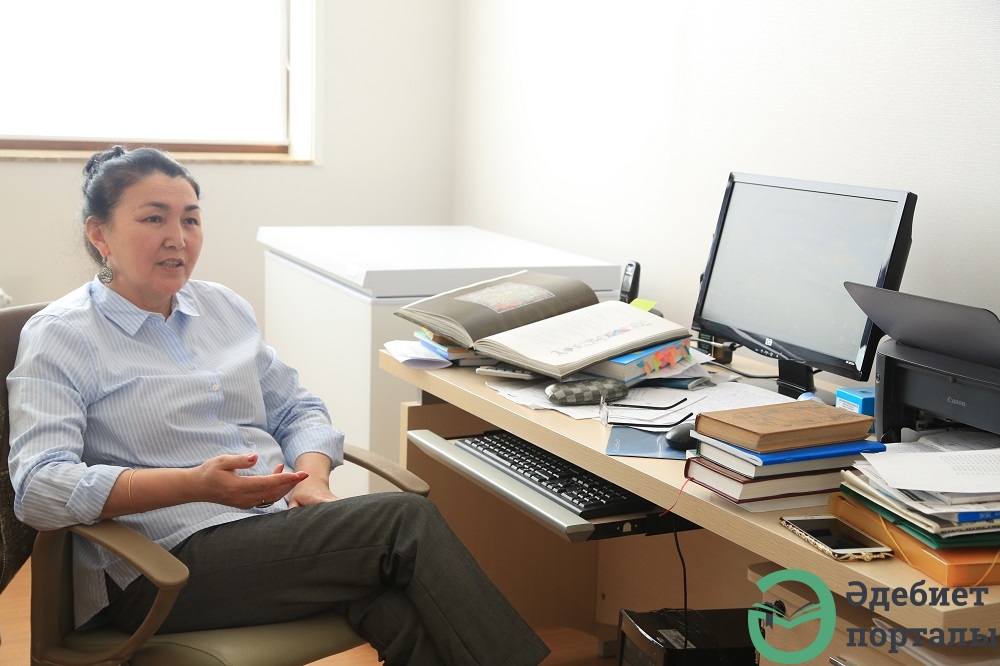 - When are you going to write nowadays? 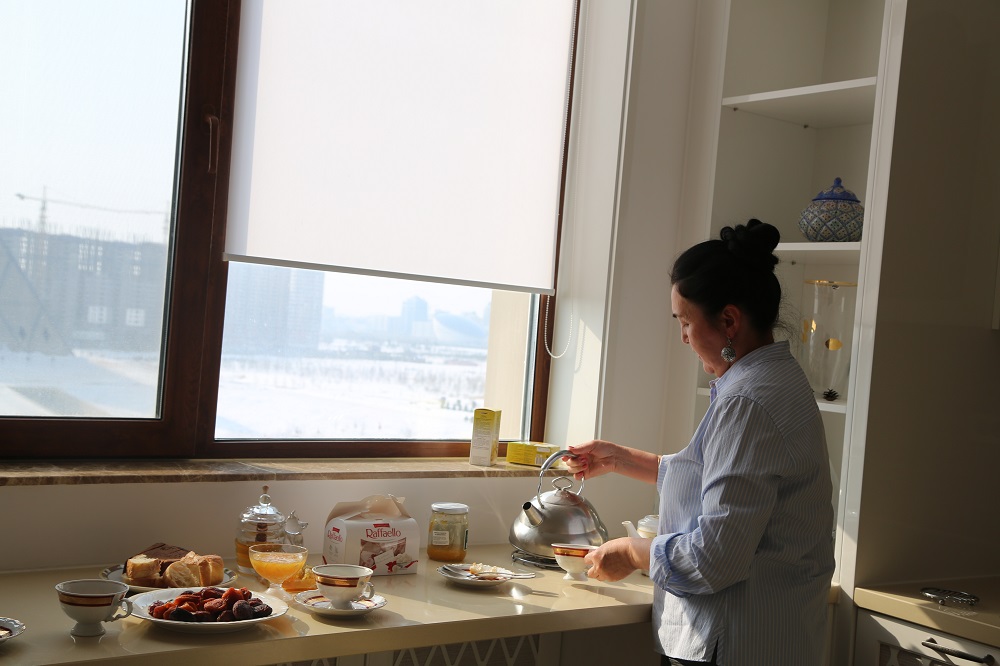 - There are days when there are no lessons at the university. In those days I put all the works and dedicated myself. I dedicate half of my day to writing. There is always a book in my purse. When I was waiting for little kids from school, I was reading books. There are occasional meetings that you do not even want to hear. Even so, I take my book and read it. I have a book on my bag. It should not be that my time will go for nothing. Some writers say that if the time comes, they can take out the notebook from their pocket and start writing. I am not that kind of person. If you notice, Akim-aga's writing room is separate, our daughter 's room is separate and my desktop is separate. Everyone is by themselves. We meet in the dining room and go back to our rooms. Our son is also. There is a lot of creative things in his works. Akim-aga have written "Tasjargan" lying on the floor. And I can not sit somewhere except for my chair, I just write sitting in my chair. Both of our children are lying on the floor while they are unable to find solutions to their homework. After all, they are also creative because both their father and I took the pen (Both parents are writers). Our daughter chooses medicine. Her thing is to search it, find it. But I still think that we have a harmony with her nature. They are always in the forefront of writing essays in their schools. Both of them writes essays well in three languages.
I have been dreaming about political issues for about 10 years. I want to find out what's going on in society, things that are affecting me, disturbed, tired. "The Eternal Child Image" is about loneliness. In my compositions, the spirit of loneliness seems to prevail. In "The Eternal Child Image" Leila is lonely and the only one who has never understood by society. Sarra is the only lonely person too in "Sarra" story. The Society looks like a fish in the aquarium. Fish eat food, someone takes it away from another one. The stronger one would eat small fry. When a fodder comes down from heaven, everyone will rival. Life is an aquarium. I'm the person looking at that aquarium from outside. I write what I can say from that life. Perhaps that is why there are interruptions. There were also those who said, There were people saying about me that: "After "The Eternal Child Image" she didn't write at all". It's not true, I'm writing things. I write for myself. People pray for themselves, go for themselves and pay their debts (in front of religions). Just like that the writing, it is necessary for me to be cleansed, for the soul to grow. 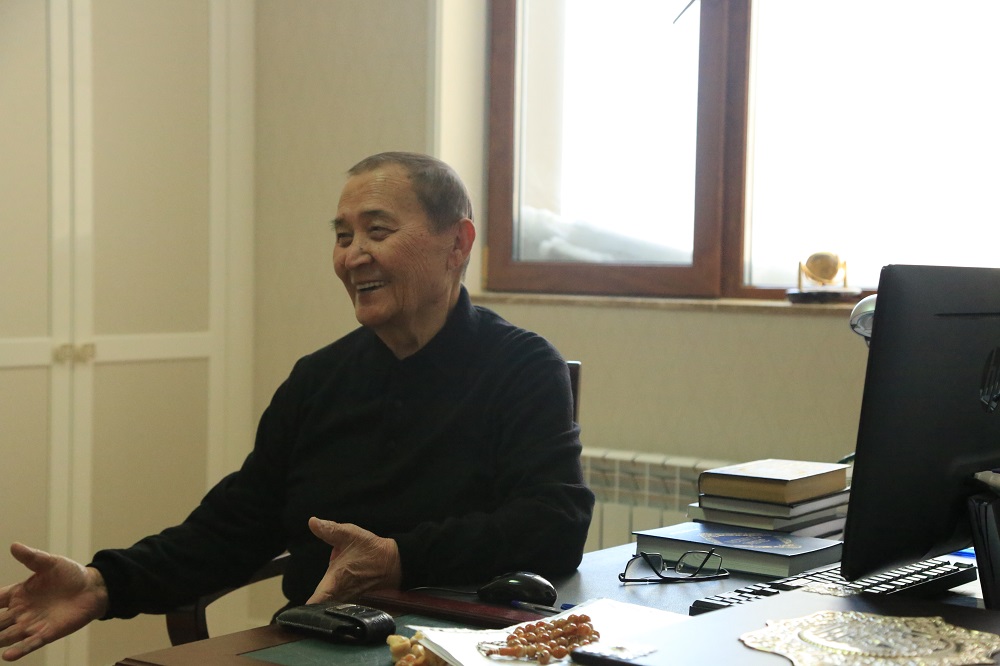 Akim-aga, who came to his office, met us with a smile.

He is asking how we are as though he knows us for the longtime. 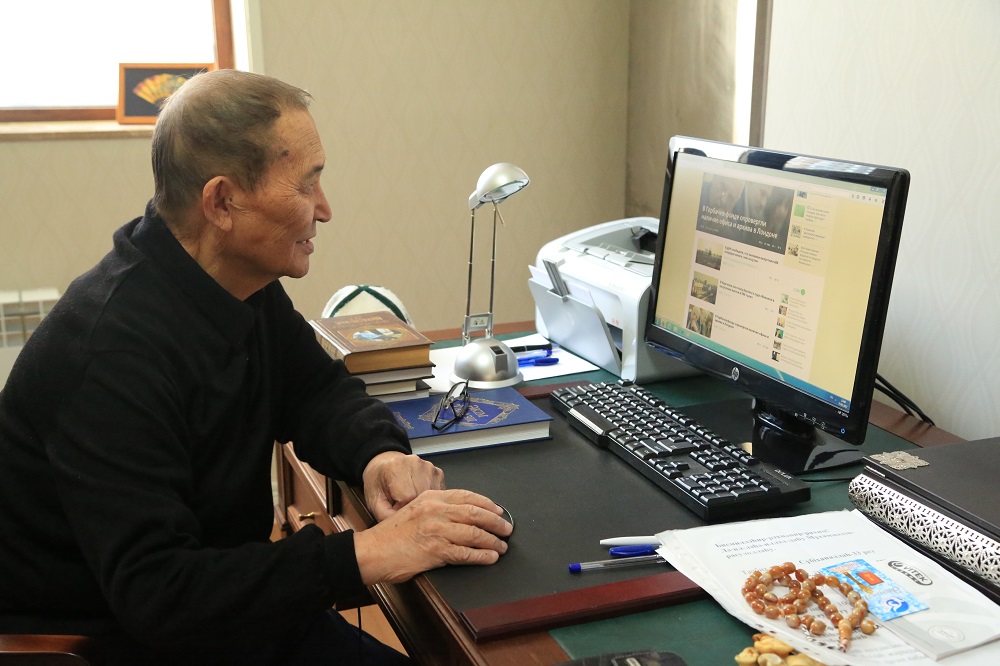 It is staggering that the writer is fluent in computer and the Internet, even though he is eighty three years old.

That's how he finds news or information he needs. 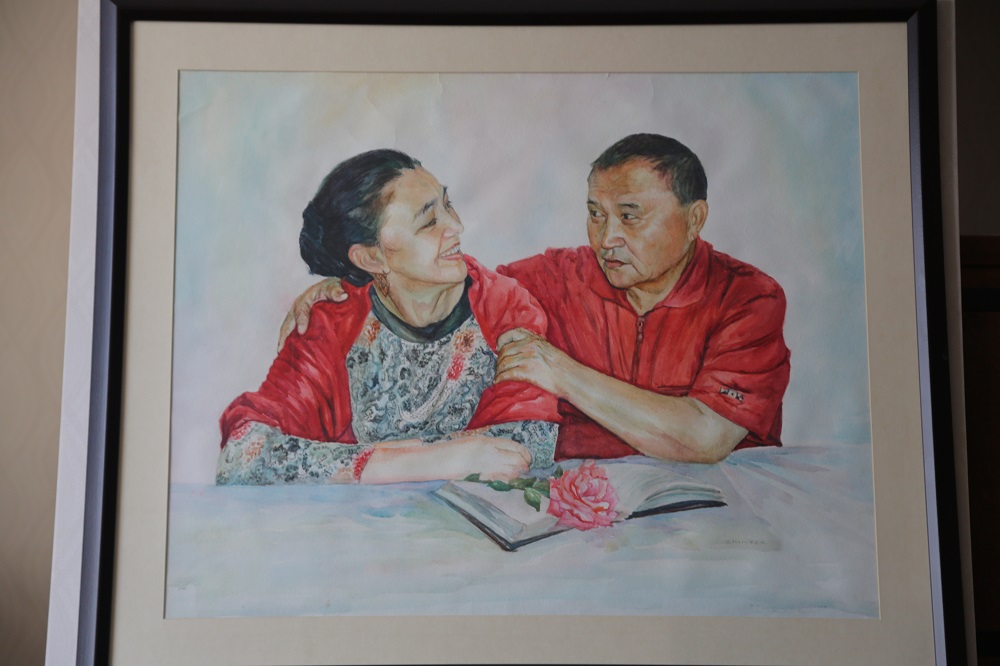 Such a beautiful picture hung on the wall.

If we have heard the story of the two writers' stories before then, we would have seen the love-loving couple now.

Prior to this, two if we hear a lot of history to raise the roof of the writer, now a harmonious home full of love couples we have seen with our eyes. 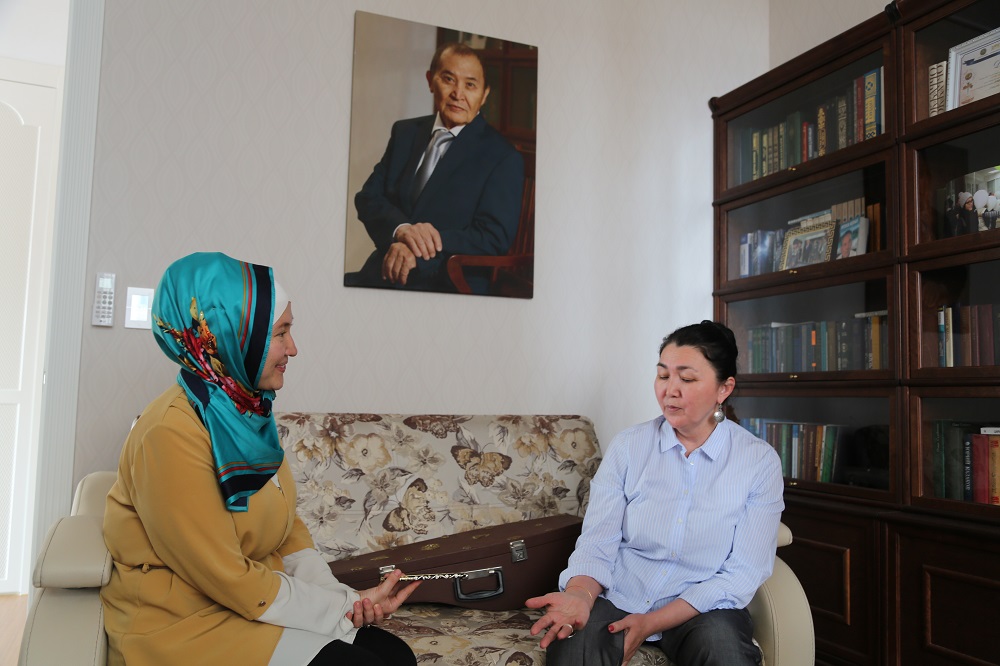 Here I remember my first acquaintance with the theater, which began with the famous work "The Eternal Child Image" by Roza Mukanova.

Even though I was crying at Danagul Temirsultanova's performance of Leila on the Auezov stage, I was the eternal beloved of the theater world, the same way. So I was unable to not ask about the "Eternal Child's Image", which was named as playwright our Roza-apa.

- It has already been said so many times, but I want to hear from you how the "Eternal Child Image" has come to the audience, Rosa-apa. 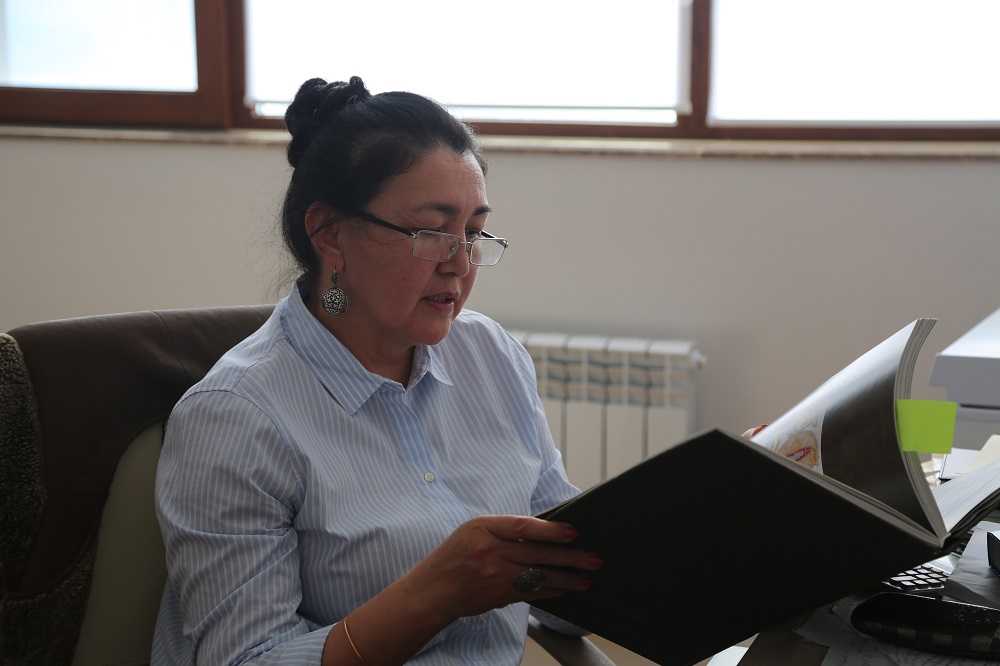 - The story of "Eternal Child Image" has been said many times. One day, Satybaldy Narymbetov said, "Let's make this story as a movie." I was in the hospital. And I told him: "Satybaldy, I can not write it as a screenwriter. The reason is that it was the story from the beginning. When it came to people as a story, everybody met it as warm as possible. Herald-aga, when he read it for the first time, evaluated the story as "classic" of "Kazakh literature". After 3-4 years, Atabayev asked me to make a drama play from that story. I wrote with great interest to see the drama as well. And it's also was very successful. The way that you want to turn this story into the movie - it's just like cooking one dish then boiling the same meal, frying it in the steamboat. That kind of food is so frustrating. Let me write another literary work to make it as a movie." - I said. He also said, "No, I have to shoot the movie with the "Eternal Child Image"!" - He was not budging from his position. "That was the moment when "Eternal Child Image" seemed to be interesting for people. That's why he was so excited about it. After I refused to write as the screenwriter, for that film - the "Kazakhfilm" movie making studio bought a plot for it. So, the new story for this movie was written by Akim-aga (Akim Tarazi) and Satybaldy Narymbetov, who wrote a script and created a film called "Leila's Prayer. The crying girl" (Social drama, 2002. Based on the story of Rosa Mukanova. The film tells about the life of the Kazakh aul of the Semipalatinsk region, which is situated in the epicenter of nuclear weapons tests. The tragedy of the people in "Leila's Prayer. The crying girl" is shown on the story of two heroes - the Kazakh girl Leila and the Jewish dissident Isaac Goldblatt, exiled from Bukhara. In the center of the plot is the village, which in classified documents is listed as Degelen No. 27. People live near the testing range, but they do not know what they are experiencing there. Children with pleasure look at the beautiful huge mushrooms, which grow from under the ground and rush to the skies. They do not understand why people die so quickly in the village, why their parents and relatives die. Leila was born in this village. When she was five years old, from an unknown illness the father died, then - my mother. The girl was adopted by my aunt Katira - the younger sister of the pope. When Leila was fifteen, Aunt Katira also died. Then Leila gave birth to a son. She was very fond of him and wanted him to live happily ever after ... The film received international recognition of the countries of near and far abroad:

- The "Eternal Child Image" and "Leila's Prayer. The crying girl" are both beautiful names for your story . How do you post a topic for your literary works? 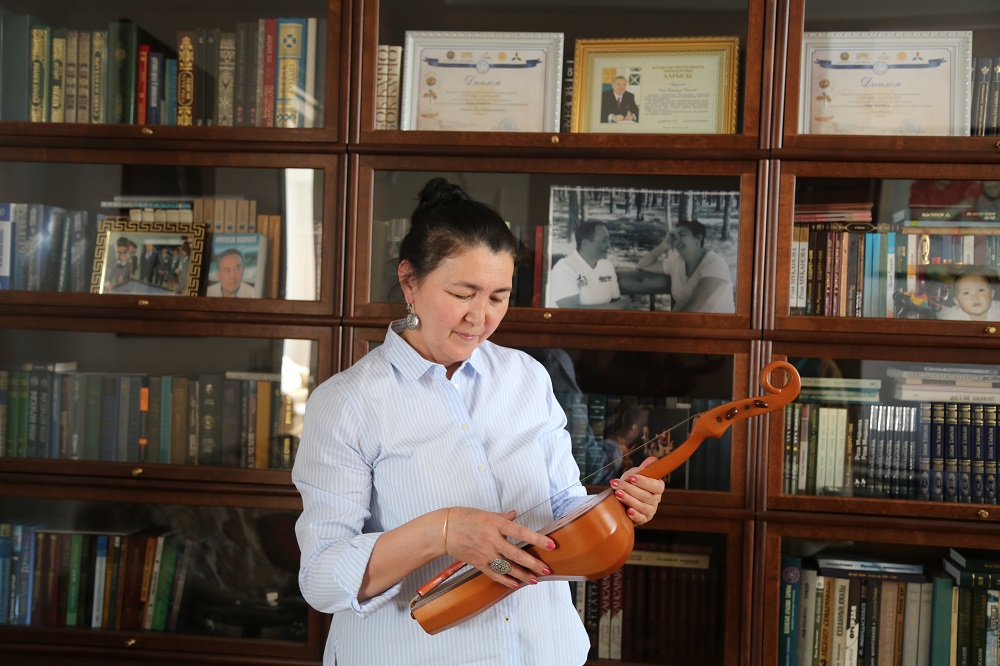 - After the "Eternal Child Image" was published as a story - I called the play piece "The crying girl". It's like the name of the place whiсh is rural farmland area. If you take a look at name, it's a mysterious. Will girl cry? Not a woman (or wife), not a mother, she is a girl! But both Akim-aga (Akim Tarazi) and Bulat Atabaev did not like it, and we returned to the play piece name of the story -"Eternal Child Image". It is my own literary work too. But for Saken (Satybaldy was called Saken by me), he liked the name "The crying girl".

Nobody knows that writer Roza Mukanova is a professional Kobyz (s an ancient Kazakh string instrument.) player. Here the writer Roza-apa shows the Kobyz that director Satybaldy Narymbetov presented as a gift to her. Among that looks like both Akim-aga and Roza-apa sometimes plays a duo - Akim-aga with Dombyra and Roza-apa with Kobyz.

Similar articles
#ESSAY
Some excerpts from the life of the famous doctor Akkagaz Doszhanova
75
#ESSAY
Some passages about how Bibigul Tulegenova came into the field of art with a nightingale in her throat
61
#ESSAY
“Zhanibek sings, Akseleu admires”
88