Home Literary process Tales of ordinary people by A. Alimzhanov

Tales of ordinary people by A. Alimzhanov 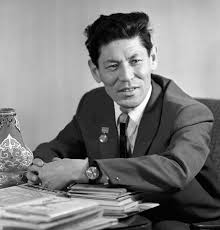 The Kazakh writer Anuar Alimzhanov wrote not only a number of well-known novels, but also many tales about the life of ordinary Kazakh people and their struggle for freedom and independence in the past. Also, he is the one of not many authors who expressed high interest in Africa and its problems. The writer became concerned about Africans and their life not in vain, the dream of liberating themselves from the English oppression was similar to the dream of Kazakhs to be free from the Tsarist rule.

This article represents two different and at the same time similar (both of them tell about the simple people) tales: one is about the life on Kazakh land, and the other – African one.

The tale of the life in the Kazakh desert is “The Last Madamar”. And it is about the chaban (“sheepherder”) called Madamar who was a famous well-digger, the master of finding the water in the endless spaces of the desert and truly believed in the existence of the sea under the sands of the desert.

The story starts with the hard situation occurred in the settlement: the inhabitants were running out of provision and water. The girl named Rym knew the surroundings perfectly, so, she became the guide of her people in search of water.

Her true friends and advisers in tending sheep were the old and wise man Shabdan and the less experienced fellow Fazyl. By the way, in certain time she fell in love with a young communicative, open and confident chaban Fazyl and soon they got married.

One day, Rym asked who Madamar was when Shabdan mentioned his name in his speech. To Rym’s surprise, he became offended because everyone had to know about Madamar.

After a while, Rym knew from Fazyl that Madamar was a close and not sociable person who knew well the desert and the places where flew water. He put the ear close to the desert and could hear the noise of water, where he dug the deep well. His son was Madamar. And the son of his son was also Madamar.

And the last, already aging Madamar had no descendants left behind him. Once, when he knew about the death of Shabdan he went far away to the desert to find Shabdan’s sheep and take of care of them. But before that he managed to help the geologists find the place full of water in the desert. Thus, even before leaving forever, Madamar fulfilled the good deed as he was wise and kind-hearted.

The work depicts the life of ancient Kazakhs who lived in the deserts. So, people had to survive and not many could develop the skill of finding the appropriate place for digging wells, the source of life for the dwellers of the steppe.

Anuar Alimzhanov in a mastery manner describes the unique ability of the man to find water in the whole desert. At the same time, the author shows the wideness and generosity of the man. He silently, moderately and without any expectations for the praise and gratitude works for the good of the people. And he is great in his nature, he is legendary Madamar.

The other tale – “Blazing Spear” is about another great man but from Kenya in Africa. The African topic was always attractive to Alimzhanov because such problems of Africans as poverty, hunger and stagnation were close to the Kazakh people back in the day.

They say that a person lives for three days and the humanity – eternity. The first day – all that was long ago, the second – those days that go to eternity since now and the third one – the future. Fantasy authors write about the future and the rest – about the past. And the given tale is about the past of one of the sons of African tribe of kikuyu.

He returned to his motherland after a long exile. On one of the spring and hot days the mighty old man ascended the hill near Nairobi and declared that he returned. After that event all the world newspapers published news that the storm was approaching Kenya because the old man came back. In fact, he believed in freedom of Africa and victory of the human.

The white people, namely, the English men or the sons of the Albion were the real plague for Kenyans notwithstanding the fact that the latter ones fought for England the same way the Senegal people fought for France.

He had a black face and white beard, a negro in origin and an American in citizenship. And his grandfather was a slave. His name was William Dubua and he was known all over the world. That day, he told the story of one brave Kenyan who, in fact, had three names. At first, he was called Kaman Va Ngengi (“foundling” in African dialect) as he was found on the land and lost his parents just on the first day of his birth. But, it was hard to call him an orphan as he was loved by his whole village and was cared by the old hunter till the white people killed the hunter who defended the young girl from the rape.

After that case Kaman Va Ngengi was sent to Mio Crooked Tooth who then sold the boy to the lazy and thick English colonist. The new master liked a quick and diligent boy, called him John and sent him to the missionary school to learn English.

But after a while John started to do his job badly (the reason was reading books that took most of his time) and was kicked out.

Anyway, he managed to finish his school and wrote lots of letters about sufferings of kikuyu. At the same time he worked a lot and each shilling was used for buying needy books. He learned the history of Africa thoroughly and was searching the facts of the unity of the roots of the ancient culture of Asia and Africa. Little by little, workers started to respect a hard-working, kind and wise boy and called him Jomo. It was his third name.

Jomo created the first secret political organization, founded the newspaper defending the interests of Kenyans and put the pseudonym “Glowing spear” under his articles. He spread his articles all over Africa, travelled and organized the strikes and meetings.

On 15 March 1922 all his activity was cancelled by the government, but Jomo was persistent.

One day, Jomo made up his mind to move to London in order to know the students of Kenya better and started to teach African phonetics at the college. Also, he found like-minded people among Kenyan students and convinced them to come to Africa and teach children and adults secretly.

After some time, Jomo was accused for his active deeds against the English government and sent into exile up to the old age.

Later, he was released. There were many reasons for that and some of them were the following. On 26 September 1959 was conducted the Day of fight for freedom of Jomo Keniata and, moreover, he had multiple supporters. Also, at last, his land got independence, long-awaiting independence from England, for which so much blood and so many tears were shed.

The Kazakh writer and publicist Anuar Alimzhanov wrote his tales in a simple and interesting way.

One can read his works in the same breath as his tales grasp reader’s attention and hold it till the end, and do not give the chance to get bored. To add, the stories of the author comprise historic, cultural and geographic data which allow the reader to understand the plot and happenings better and represent the picture in a more vivid and colorful way.