Zhusipbek Aimauytov is one of the bright representatives of a galaxy of the Great names of the Great Steppe, and his novel ‘Akbilek’ is one of his most famous works. It tells about the difficult fate of woman in the period of the formation of Soviet power in the Qazaq steppe and the Civil war.

A bitter power struggle, that took place in Russia spread to Qazaq steppe. Pressed by the Imperial Russian Army Qazaq people were completely confused. They did not understand who were their enemies, the White army soldiers or The Red ones, because they were abused by both of them. They suffered humiliation from both of them.

Through the fate of the heroine of the novel, Zhusipbek Aimauytov showed the tragedy of the Qazaq people. The situation happened around made them submissive, meek and miserable.

At the beginning of the novel, we meet Akbilek in Kurchum, during the raid of the White Army soldiers on the aul of her father, Mamyrbay (an ‘aul’ in Qazaq language means ‘a village’ or ‘a small settlement’.). Her father was a rich man, a lord of the aul. In the eyes of Akbilek, they killed her mother, who tried to protect Akbilek, and she herself was captured by the soldiers. For a young girl who did not know a single word in Russian, terrible, full of humiliation and suffering days began. A shy angel girl who never looked up straight at a man now, having lost her natural purity, forcedly, burning with shame, became entertainment or a ‘toy’ for a white gangster, a soldier of the White Army. 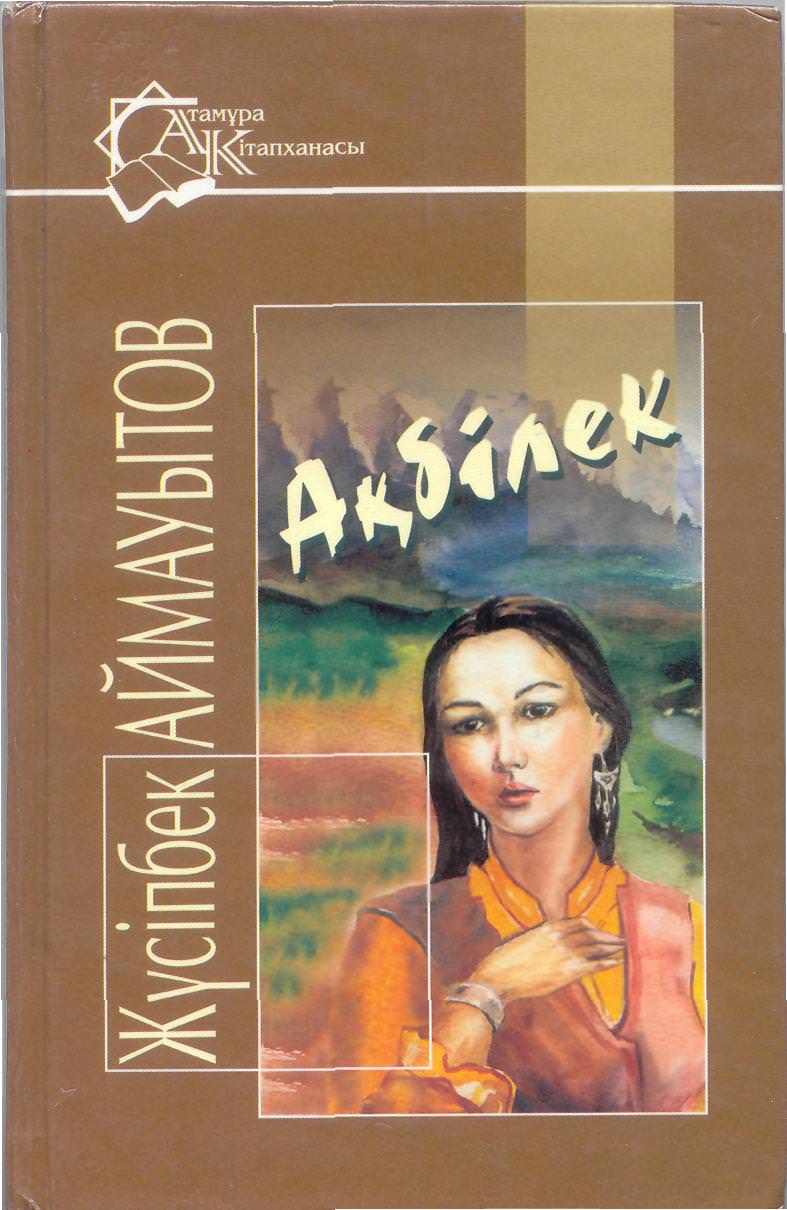 “Akbilek was lonely wandering around the Russian camp, like a stray puppy, but she was happy at that moment. It seemed to her to die, wandering in deserted mountains better, than to be killed by a bullet of a gunfire ...” - the author writes.

Then we see Akbilek in combat with hungry steppe wolves. They attacked her at night: “Frightened by the fire wolves retreated at once ... “Flame, flame, flame! Cowardly beasts! Here is the flame, here is the gun! ... If you want you can come closer, but be careful! It can burn you! I’ll burn you! ”- cried Akbilek. The night seemed so long for her, but she could save her life.”

The next important event is the meeting of a girl with a wandering dervish - a holy man named Iskander. “... and the sorcerer himself, and the healer, and the man of God ... this kind of person can do everything. Iskander's life is a mystery. Of course, Iskander is a humanbeing. But what kind of a humanbeing?”.

She entrusted her fate to the dervish and on his back Akbilek returned to her father’s aul. “She wanted only one thing: to get to the aul to see her father. She wanted to meet him, then they would embrace each other and go to pray over the mother’s grave and like her mother she would take care of her farther”.

After returning Akbilek to her village, she met her beloved Bekbolat, but he left her. At that moment she got to know that she was pregnant. After the refusal of her fiancé to get marry, she decided to give a birth for a child secretly. With the help of close people, she gave her baby to her kind aunt for upbringing, left the aul for a city and started a new life.

From the point of view of the person, it is impossible to idealize a woman who allowed such actions as the secret birth and deliverance from a child. But the author himself sympathizes his heroine and fully rehabilitates Akbilek in the eyes of the readers.

Akbilek saved her inner life force from further moral destruction. It was the inner purity and harmony that helped her to endure cruel and humiliating life difficulties.

Giving description for Akbilek's character, we would say that she is a generous, gentle, sensitive, loving and courageous woman.

The revolution in this context is presented as a life-saving circle, which gave deprived of civil rights women the opportunity to feel like a full-fledged mistress of their life, able to change something in it. Zhusipbek Aimauytov wanted to highlight exactly this idea in the novel.

In a completely different perspective, the author describes Orik, who is a step-mother of Akbilek. Orik is a woman with a difficult fate, a widow. Without asking her consent, local aristocracy robbed her children and forcibly married her to another man, to Akbilek’s farther. From such tests her heart turned to stone, and she brought all her anger and hatred on Akbilek, on her sister and brother. On an example of her character we can see how tough life can change a personality of a person.

The image of another woman, Urkiya in contrast to Orik evokes positive emotions. She is a wife of Akbilek’s brother. Wise and kind Urkiya did everything to save the newborn, protected Akbilek from gossip and slander. Urkiya has sponged up the spiritual wealth of Qazaq people and centuries-old female wisdom.

Koyteke, an orphaned boy who had herded the cattle of Abenbay is another interesting character of the novel. He had to find lost camels in a frozen weather upon the order of his lord, Abenbay.

The poor boy even from his colleagues, sheep care workers did not see sympathy, only coarse invective. Instead of warming, feeding and comforting a child, they criticized and mocked him.

After such an exhausting and painful journey, Koyteke fell ill and very soon died. The cruelty of aristocracy is understandable, but it is hard to explain the obduracy and heartlessness of ordinary people who served to Abenbay side by side with him.

I think that the mercy and compassion living in a heart of each of us will atrophy if they are not fed with good thoughts and deeds. Rabindranath Tagore is right in his statement: “People are cruel, only a person is good”. It all depends on the individual, on his spirituality and humanity.

There are a lot of colorful female images in the novel. One of them is Camila. Through her dramatic fate, Zhusipbek Aimauytov shows how Qazaq women were humiliated and insulted at that historical period of time. It was hard to read, but they cannot stand for their dignity because they simply were women. They were oppressed by men and allowed to manipulate themselves.

The plot of the novel ‘Akbilek’ can be described as ‘a Long Ordeal’ of a Qazaq woman. The point is not in the movement of the plot, but in the inner spiritual elevation of Akbilek.

The heroine at the beginning of the novel and in its finale are qualitatively different people. In the course of the novel, Akbilek developed strongly her personality. Through the inner monologues of the heroine, the author reveals her rich inner world, the formation and growth of her human qualities in a new historical reality.

Zhusipbek Aimauytov was born in 1889 in Bayanaul district of Pavlodar region. Up to 15 years old, he studied how to repair various kinds of things from his father and got appropriate knowledge from a local mullah. He could turn his hand to anything. Later on he became a mullah and taught local children.

At the age of 18, Zhusipbek Aimauytov spent one winter studying at a Russian school and two months in Kereku (at present the town is called Pavlodar) in a state agricultural school, from which he was expelled, because, together with other students, he rebelled against an unfair school regime.

Two years after working as a teacher in his village and having studied at the Russian-Qazaq school in Kereku, in 1914 he entered the Semipalatinsk Teachers' Seminary, which he graduated in 1919. Here he met a famous geologist, academician Kanysh Satpayev and an eminent Qazaq writer Mukhtar Auezov.

While studying at the seminary and at the same time earning himself for food, Zhusipbek Aimauytov did various kind of works: he was a chaser, carpenter, shoemaker, made Qazaq traditional instrument ‘dombra’, played that instrument, performing his own songs and melodies.

As a teenager he wrote his first poems. The second time when he was involved in a writing activity happened in his twenties. The first article written by Zhusipbek Aimauytov was published in 1913 in the newspaper ‘Qazaq’. In 1916, he wrote a play devoted to Qazaq people sent to do work in back areas.

He was a member of the ‘Alash’ party for a short time (the ‘Alash’ party emerged from the national movement of the Qazaq intelligentsia. Its participants fought for the rights of the Qazaq people to land, independence, preservation of their mother-tongue, national culture and traditions), then he supported the Soviet power.

He became a member of the collegium of the People's Commissariat for Education (the RSFSR state authority that controlled virtually all cultural and humanitarian spheres: education, science, etc. in the 1920s-1930s).

He was the editor of the ‘Qazaq tili’ newspaper, then he worked for the ‘Ak Zhol’ newspaper.

In 1931, the writer was arrested for ‘counter-revolutionary activity to promote insurgence’ and executed. His works were banned, books removed from libraries and destroyed. The novel ‘Akbilek’ written in Qazaq language was again published only in 1989.

It was published in Russian language for the first time in 2007.