Home Literary process ALL What kind of books does Kazakhstan's youth read?

What kind of books does Kazakhstan's youth read?

So our literary portal decided to check what kind of books does Kazakhstan's youth read? 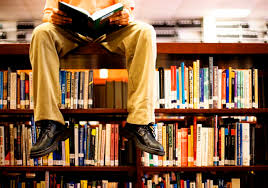 "Today's youth do not read books!"

This is the phrase we often hear from adults who say that today's generation of young people has ceased to be interested in books and also no longer reads even a page of book.

However, the sociological survey of researchers says differently. Recently, Kazakhstanis as a whole began actively reading books in both paper and electronic versions. This is confirmed both by librarians and employees of bookstores.

"By the evening of weekdays and on weekends there are a lot of buyers, mostly young and children come to us, of course, accompanied by adults. Especially choose fantasy, detectives and bestsellers. Recently our readers choose Kazakhstan literature. Almost instantly, the new book by Yermek Tursynov’s "Little things of life" was sold out, - say the sellers of one of the bookstores in Astana. 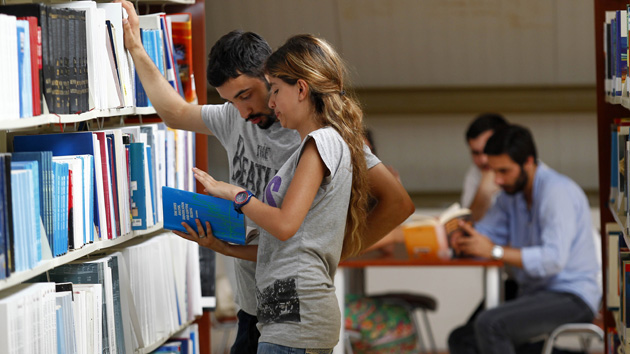 According to local researchers, the population interested in reading more female (eighty percent), as opposed to men (over seventy percent). According to experts, the attitude of young people to reading changes in a positive way, as today there are different ways and conditions for enriching their spiritual world. The latest gadget models also contribute to this.

Not to mention the libraries, the variety of books in the stores gives readers not only to buy them, but also to get acquainted with the latest innovations.

What books does the modern youth prefer?

"Harry Potter", "Twilight", " Me Before You", "The Alchemist", "Shantaram", "Game of Thrones". Top popular books, found in the personal library of almost every student of college or high school.

The aforementioned best-selling books are among the most sold since its release. For example, the last series of the book "Harry Potter and the Damned Child" literally "blew up" not only the Internet, but also the book shelves of stores from around the world. This book became the leader of the list of bestsellers of two thousand and sixteen. Potterian remains one of the most popular book series.

Books by the English writer Jojo Moyes are becoming popular not only because of high-quality advertising course and adaptations, and screenings, but due to a special romantic spirit.

The novel "Me Before You" became a world bestseller, the world sold more than 3 million copies. Her works took an honorable place in Kazakhstan's reader's hearts. 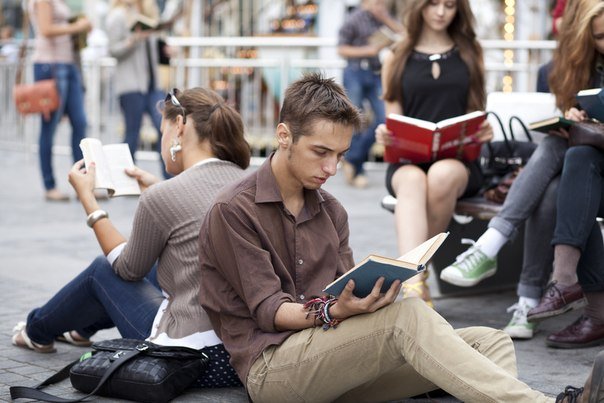 We interviewed several students who were looking for books. To the question "what kind of books they prefer to read?"- They replied::

“I prefer to read science fiction. I read the classics from time to time, but I do not understand yet”, - shares Moldir, one of the students of the school of Astana.

"Today's books are expensive. Prices are starting from two thousand Kazakhstani Tenge (about approximately six United States of America Dollars and fifty cents - At the rate on twenty eight of April, two thousand and seventeen). I do not get a scholarship. I, as a student, cannot afford to spend money. Therefore, I choose the more optimal option - read the electronic version. This has both pros and cons. The big disadvantage is that vision spoils, when all the time you look at the monitor and on small fonts ", - says Arman, a student of one of the capital's colleges.

In this connection, the question arises: are there ways to purchase books cheaper in our difficult market world?

After all, it is not necessary to buy books in expensive stores - you can take it for a month in the libraries of the city or buy books from old people and pensioners who are waiting every day on the street in the hope that one of the passers-by will necessarily buy the right, though old book. And in this way you can fill up your personal library at a very optimal price – five hundred Kazakhstani Tenge (about approximately one United States of America Dollars and fifty eight cents - At the rate on twenty eight of April, two thousand and seventeen).

Since the speech was about a personal library, we can note that in the era of modern gadgets and readers, the concept of "personal library" does not make sense for schoolchildren either.

Nevertheless, reading the "living" and the present book does not compare with reading the same book on an electronic medium. The paper book has a special design - cover, font, illustrations. In addition, it can mark favorite places, emphasize important and necessary. Even looking at the bookcase with full books is already a huge joy. The book - a value that protects itself.

Rinat Churaev, administrator of the book department at “Meloman” store, told the correspondent that most of the young people prefer to buy fantastic works or comic books. He said that for example, many visitors choose fiction or books based on real events. Rinat also prefers to read science fiction himself. He thinks that there are a lot of Harry Potter fans here, they can buy books about this wizard for a gift even for twenty thousand Kazakhstani Tenge (about approximately sixty three United States of America Dollars and forty nine cents - At the rate on twenty eight of April, two thousand and seventeen). Rinat also told us that the present golden age is the age of the comics in fact, it is the cinematic universe. Rinat think that Marvel (Iron Man, Avengers) conquers one of the leading positions. In Rinat Churaev’s opinion - Star Wars will always be one of the leaders, because it comes out "Rogue One: A Star Wars Story" and all possible movies. He thinks that what comes out on the screens of the cinema, actually that one people read. “First people will look at the film, and then they decide to read the book. Of course, the "Game of Thrones" will always be in a trend. As for the Kazakh literature, the youth chooses more classical works. We can note that book which came out last year, "Menin ekіnshі kіtabim" by Leila Sultanqizi - one of the most best-selling books to date. Of course, the female half reads it more. Also, Serikbai Bisekeev's book is very popular among young people. Robert Kiyosaki's book will also come first. These books are read to an audience of 25 years, these books are interesting to those who open their businesses or start-ups”, - said Rinat Churaev.

Ilyas Moldagaliyev, a bookstore consultant, says that mostly the same works are often taken. For example, from the business literature of the same popular authors. Mostly Western. Recently, the tendency has gone that we read books of our Kazakhstan compatriots, unfortunately, there are not so many of them. Serikbay Bisekeev and Marat Abiyev are business authors. One turns out to have written the “Kazakhstan dream” of Marat Abiyev, Serikbay Bisekeev – “Do by yourself”. They are often taken from business literature. From foreign authors often take Napoleon Hill, Robert Kiyosaki. Most audiences are buying a book by the Japanese author “Rich Dad - Poor Dad”. Quite often they began to take Stephen Covey's book "The Seven Skills of Highly Effective People". 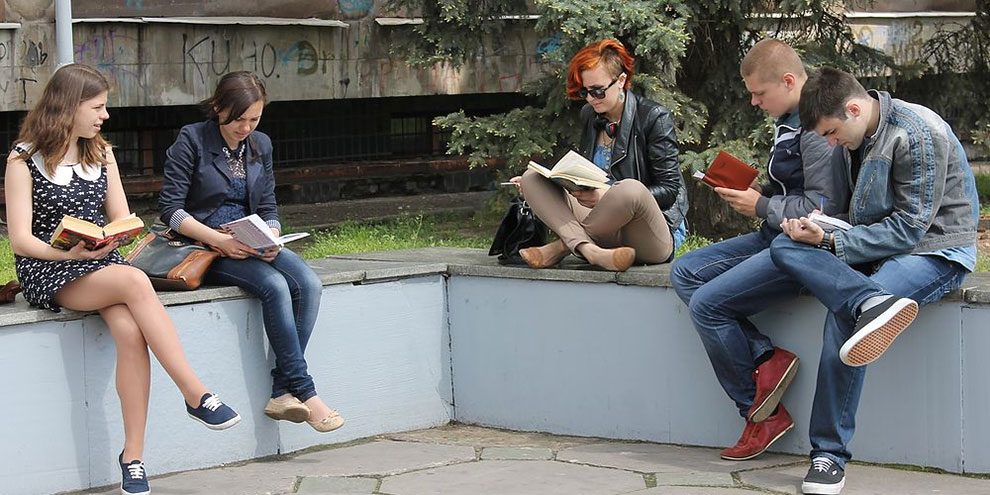 At the end of the article, we would like to present the following answers to you about which books young people prefer:

- Anuar, 20 years old: I read fiction, in particular, by Stephen King. I love it.

-"Fantastic creatures and where they dwell."

- Aitgul, 19 years old: I like reading Harry Potter. But also the novels of Jojo Moyes.

- Diaz, 17 years old: I like to read science fiction, but I'm not here for books, but for toys.

- Mahabbat, 25 years old: I came for culinary books. But I also read classics. But how as without the classic works of Auezov, Tolstoy, Dostoevsky. Abay Kunanbaev’s works I read, first of all.

- Serikzhan, 24 years old: I read psychology, as well as books by Robert Kiyosaki. The last thing I read was "Rich Dad, Poor Dad."

- Ilyas: I read a lot of books. I do not give preference to one book, because it would be a narrow view of things. It is useful to read different authors. One author, of course, gives something, but reading another author, you already begin to see this idea from a different angle. To know the subject or topic well, say, in business, you need to gather more information. The clearer you have a picture, whether this person is telling the truth or any facts he has obtained, based on his experience. We need to take into account our mentality. "

Similar articles
#ALL
The Kazak Intelligentsia who married to ethnic minorities
3898
#ALL
Is it too late done? Or better late than never?
3519
#ALL
The Literature portal collective congratulated Tolen Abdik on his 75th birthday
2566