My grandfather is a teacher, my father is a village teacher, and Allah himself told me to go to the Pedagogical Institute. Family profession, fate! And I became a freshman at the Physic & mathematics Faculty in Kazak Pedagogical Institute. In our rural school, algebra did not go further, and I heard about trigonometry for the first time in lectures. I took a textbook and for four days I did not just read it - I memorized it by heart, paged it. That’s how my memory works.

And I lived in a dormitory, and there were still eight people living in my room with me. I come in the evening from the library, my head swells with formulas and drawings, and the guys read Auezov out loud, new chapters from his novel. To me, of course, not to an elegant literature, but willy-nilly I listen and remember. And word for word. Abay's love for Togzhan, his passion, the rapturous beauty of the universe. Trigonometry I learned by heart, but these pages forever fell into memory. And in me suddenly a burning interest to the word - to what is called literature ...

So Auezov "dragged" me to the faculty. 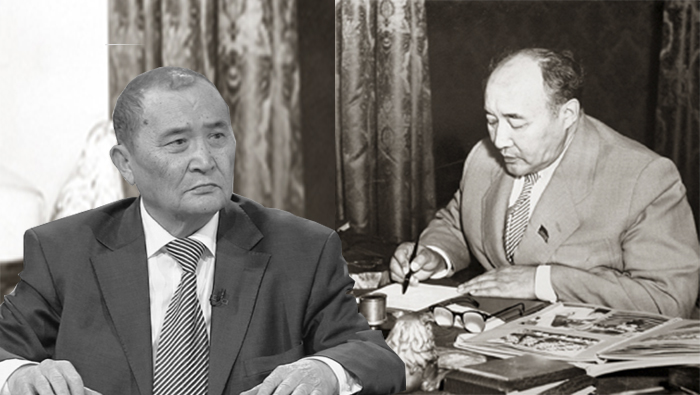 I knew: Auezov teaches at Kazak State University. And we in the teacher's college could only dream of seeing and hearing it! And one day our rector, Hero of the Soviet Union Malik Gabdullin (a wonderful man, a great writer!), Comes to us, first-year students, to the audience and says: "I want to give you a gift - to invite Auezov".

That night I did not sleep. Memory read to me page after page from Auezov's novel, and I, as if ingots of gold, were sorting out the phrase after the phrase ...

He came on a long black ZIM (GAZ-12 ZIM - was a Soviet limousine produced by the Gorky Automotive Plant from 1950 till 1960. It was the first executive car produced by GAZ and the first one to have the famous leaping deer hood ornament), and now I knew that it was on such machines that the living gods traveled. And we gathered in the 13th audience, and this one in the institute: the audience is an amphitheater. The speaker was clearly visible to everyone. We stood for a long time applauding the guest. And he was witty, merry and also happy to meet with us. But at the end of the curtain two "goodwill" stood up and one by one the cheat sheet read the text, accusing the author of the novel "The Way of Abai" in praising the feudal-bai system. "And where is the image of a simple proletarian?" They asked. The face of Auezov immediately turned black ...

Now I understand: it was October 1952. Stalin was still alive, while in the universities of Alma-Ata already taught "cosmopolitan" and "nationalists". They should also be found among the Kazakh intelligentsia. As you can see, they found ...

The meeting was over. All stood up, preparing an ovation to hold the guest, and he, stooping, hurried out of the audience. I, fearing to miss the moment, worrying that any detail of this very important (almost historic!) Meeting would elude me, jumped out after me.

At the entrance was the same black ZIM. Gabdullin was discouraged. He, as if apologizing, said something to Auezov. To which he replied (I clearly heard his voice): "What do you have with it? .." And then the phrase was said, only one, we heard it two, I and Malik Gabdullin: "They are growing up on the ankle book, and There they are trying to criticize it. " And he left.

For a long time the names and faces of the performers have been forgotten, neither Malik Gabdullin nor Mukhtar Omarhanovich alive, but I'm still thinking about his words: Does God or the devil send great critics-pygmies to great people who, after being an ankle-deep genius, try to scorn him?

Celebrated the one hundredth anniversary of the Master. In the general chorus of singing praise, the loudest voices of those who ten-ffteen years ago were blown away, trying to pull Auezov off the pedestal, to scramble into his place, to zakamenet on it. At one of the directors of the publishing house "Zhazushy" Auezov was not published for 18 consecutive years. But one of those who tag on his pedestal, was issued at the same time 22 times. Yes, that there Auezov! The sector of Aba Studies in the Academy of Sciences of the Republic of Kazakhstan was at some point on the verge of closure. And all this did not happen under Stalin, but in the 60s and 70s!

The second meeting. I, a young literary man, worked at that time in the newspaper "Kazak adebieti" (Kazak Literarture) as a correspondent. Once, after the editorial board, when I was sitting in the empty office of the editor-in-chief with Utebay Kanakhin, a decent and kind-hearted person, Auezov came to us and looked in on some business. And Kanakhin, from great excitement, blurted out the absurd phrase: "Fly, I read your book one of these days and am going to write criticism." In Kazakh, it sounded with a bad overtone: say, I'll criticize you. Auezov somehow sneered badly: "Well, write, write, criticize, but remember: not only the critic evaluates the book, but the book also evaluates the criticism. Do you understand me? "In hindsight, I think so. It was a year before Auezov's death. It was the 1960th. He was again harassed. And the awkward phrase of a good man discouraged Auezov. I repeat: Kanakhin said this without malicious intent, meaning that he is going to write an article, but at the same time he used the word "son", and it has the basic meaning of "criticism" in Kazakh. Apparently, Auezov took these words as another attack against him.

But if we reject the awkwardness of the moment, Auezov said, in my opinion, the ideal phrase: not only the reader evaluates the book, but also the book determines the intellectual level of the reader.

How many times have I heard the opinion that the last part of War and Peace to the old man failed, he dried it up with historical studies and philosophy. It's boring! And then it's unfortunate to grieve-criticism that, had it not been for this "boring" last part, we would have lost the thread of the whole epic. The same "mold" and about the "Way of Abai". Like, the first two books - yes, captures, carries. But in the third or fourth it was incurred, they say, the author in a deep philosophy, it is not every one's teeth. What is true, then it is true - not everyone is in the teeth. Auezov's novel is not for fools. Like Tolstoy's novel. Here you need a culture of reading.

Here, perhaps, that's all. Carefully I store in memory these two, as though casually thrown by the Master of the phrase. I do not know whether they are fixed somewhere or not. But we must know and remember it.

Share:
Similar articles
#ALL
The Kazak Intelligentsia who married to ethnic minorities
2158
#ALL
Is it too late done? Or better late than never?
2167
#ALL
The Literature portal collective congratulated Tolen Abdik on his 75th birthday
1896