Home Literary process Learning From Literature: Author Explores and Explains Kazakhstan through Its Prose and Poetry

Learning From Literature: Author Explores and Explains Kazakhstan through Its Prose and Poetry 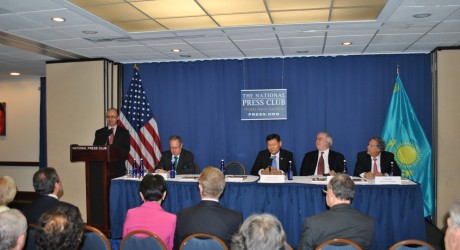 “There are similarities between the United States and Kazakhstan,” states Dr. Rafis Abazov, the editor of “The Stories of the Great Steppe: An Anthology of Modern Kazakh Literature”, in a talk presenting his book to an American audience at the National Press Club in Washington, D.C. on October 8, 2013.

In our interview, I asked the Columbia University professor and visiting professor at Al Farabi Kazakh National University in Almaty, to discuss how Kazakhstan novels and poems might be similar to literature in the United States.

Professor Abazov says, “The United States started as a wild place with much unexplored land.  In America, cowboys with their horses moving about from place to place in search of a better life are similar to the nomads of Kazakhstan who were constantly on the move.

In both countries the nomads and cowboys loved their horses and horses were the symbol of the Wild West of America and are still the symbol of Kazakhstan today. And, as can be seen my book has horses on the cover and at the beginning of each chapter.

These novels and poetry that have been selected for the book explore relations with nature and with each other.  Exploring nature and relations with one another are topics of importance in literature in both Kazakhstan and the United States.”

As the Kazakhstan Ambassador to the United States Kairat Umarov said in his remarks at the book launch at the National Press Club, “Literary works connect people. Literature stands higher than politics. Writers are always highly acclaimed in our Kazakh society.  As the stories and poems show in this excellent anthology: human values are universal. I hope these stories inspire all of you in the audience to go to Kazakhstan and experience our culture and hospitality.”

“The main theme of the book are the relations of people with the concept of being nomads.  With the globalization of the world people are going back to their roots.  They need an anchor in their own background. Writers in these stories and poems are writing about intellectual issues.  They are looking for his or her own place in the world.  Overall goal of these articles and poems is to explore Kazakh culture through literature by reading about this part of the world,” says Dr. Abazov.

“Relations between people is what Kazakhs write about.  The book gives a little flavor of Kazakh literature to an American audience.  Hospitality is what many people think of when they reflect on Kazakhstan.  As a saying goes in Kazakhstan, ‘You share a cup of teas the first time you come to my house as a guest. The second time you come for tea as a friend.  The third time you are a member of the family’’’, says Dr. Abazov, the author of six books.

Having just put on a conference on the horrors of nuclear testing in Kazakhstan when they were part of the Soviet Union, I read “The Day the World Collapsed” by Rollan Seisenbaev in the prose part of the anthology.

Seisenbaev has conveyed the tragedy of nuclear testing in Kazakhstan by the Soviets as well or better than any real life non-fiction book could as he relates in his novel: “I had never seen anything like it. The mountains groaned.  The fiery mushroom rose up over us, flashes of light blinded me.  I saw a fantastic mushroom fill the sky and all about it a fiery light show.”

This short excerpt from his book graphically tells the reader what an eyewitness-a young boy-might have experienced seeing a nuclear explosion near his home-when the Soviets conducted nearly 500 nuclear tests in Kazakhstan before 1991.

The young boy sees a small girl friend of his die because of the blast and reflects on the life she will never have as a grown up.

One of the poems I enjoyed reading in this anthology is “Earth, Hail Man” by one of Kazakhstan’s most noted writers Olzhas Suleimenov who will be speaking in Washington, D.C. in November at the invitation of the Embassy of Kazakhstan to discuss his many writings.

As a former writer of poetry while in college many years ago, I was impressed by this poem as it was about something completely different than what I had thought at the beginning when I first started to read.

It is actually about the landing back on earth of Russian cosmonaut Yuri Gagarin in the early days of space travel in the 1960s. As he flies through space on his descent back to earth he relates how much he loves life when he says “It is life I love, the Caspian brine, man consisting largely of protein and a scrap of something called soul…”

It is an impressive and thought provoking poem about life and space and man and nature.

There are many other excerpts from novels, short stories and poems in this excellent anthology that whet the readers appetite for more extensive reading of Kazakh writers from the years living as part of the USSR and the more expressions of freedom after Kazakhstan independence in 1991.

As Professor Abazov said in our interview, “We need literature to explore relations with nature and each other.  We don’t just discuss business and diplomacy. That would make us like a machine.”

The prose and poetry in “The Stories of the Great Steppe” certainly gives the reader a “flavor of modern Kazakhstan literature”.

Share:
Similar articles
#LITERARY NEWS
‘English Rakugo Show’ took place in Nur-Sultan
1688
#LITERARY NEWS
Astana hosts an Eurasian Literary Forum under a title “The Power of a Word in a Modern World” these days
3692
#LITERARY NEWS
It has been 93 years since the Union of Writers of Qazaqstan was established.
8906