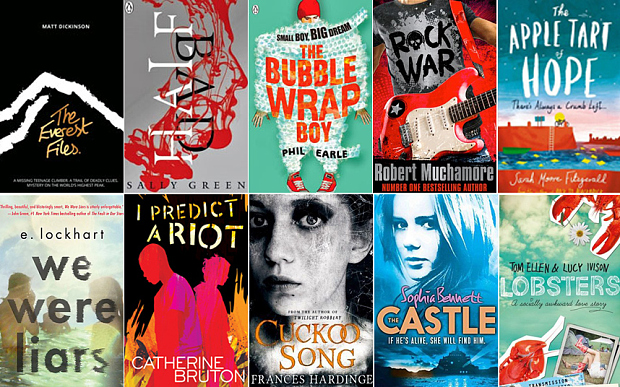 Matt Dickinson, who has climbed to the top of Mount Everest, has written a dramatic and thoughtful thriller.

A thriller about nationalism, terrorism and what happens when Scotland is divided from England from Claire McFall, winner of the 2014 Scottish Children's Book Award.


THE YEAR OF THE RAT BY CLARE FURNISS (SIMON & SCHUSTER)

The Year of the Rat, a debut young adult novel by Clare Furniss, follows a year in the life of 16-year-old Pearl as she struggles to cope with the death of her mother.


BONE JACK BY SARA CROWE (ANDERSON PRESS)
Sara Crowe's debut YA novel is a powerful modern fantasy set on the day of the annual Stag Chase.

Phil Earle's The Bubble Wrap Boy is a funny tale about a boy with a secret talent: skateboarding.

Robert Muchamore's new series of novels is about music and the first instalment, Rock War, is a pacy and enjoyable read.


THE APPLE TART OF HOPE BY SARAH MOORE FITZGERALD (ORION)

A moving tale about a friendship that is wrecked when a warm-hearted boy meets a girl who is rotten to the core.


WE WERE LIARS BY E LOCKHART (HOT KEY BOOKS)

E.Lockhart's novel We Were Liars, set among a rich New England family, is mysterious and powerful.


I PREDICT A RIOT BY CATHERINE BRUTON (EGMONT)

Catherine Bruton's I Predict a Riot is a powerful novel about gangs, class and race, set during a violent summer in London.

Lobsters is a funny novel about finding love and losing your virginity, in a tale co-authored by Tom Ellen and Lucy Ivison.

Award-winning YA writer Frances Hardinge's new fantasy novel is about an 11-year-old changeling.

Kim Slater's debut YA novel is about a boy with learning difficulties out to solve the mysterious death of a homeless man.

Matt Haig's dystopian thriller Echo Boy is an imaginative and pacy thriller about the future and about what makes us truly human.