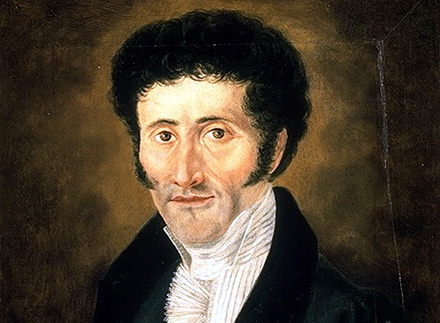 Ernst Theodor Amadeus Hoffmann… There is some magic in this name. It is always said completely, and it is as though surrounded with a dark corrugated collar with fiery reflections.

Actually, Hoffman was the wizard. Yes, not simply storyteller as Brothers Grimm or Perrault, he is the most real wizard. After all, only the true magician can make wonders, and fairy tales... from anything. From the bronze door handle with the grinning ugly face, from nippers for nuts and hoarse fight of old hours; from noise of a wind in foliage and night singing of cats on a roof. However, Hoffman didn't wear, a black cloak with mysterious signs, and wear in a worn brown dress coat and instead of a magic wand used a goose quill.

Wizards born whenever they want and wherever they want. Ernst Theodor Wilhelm (his real name) was born in the nice city of Konigsberg in day of Saint John Chrysostom, in the lawyer's family. However when the boy was three years old, his parents dispersed, and he was brought up in the house of the grandmother of the maternal line under the influence of the uncle lawyer, the person, who was clever and talented, inclined to a fantasy and mysticism. Hoffman early showed abilities to music and drawing. But, not without influence of the uncle, Hoffman chose to himself a path of law from which he tried to escape and earn all the subsequent life by arts.

Probably, he treated precipitately because anything so doesn't resist magic as laws and rights. And here the young man who since the earliest childhood above all loved music (and even took himself a name Amadeus in honor of Mozart), played a piano, a violin, sang, drew and composed verses — this young man had to, as well as all his ancestors to become an official. Young Hoffman obeyed, graduated from the university and many years served in different judicial departments. He wandered on the cities of Prussia and Poland (which then was Prussian), sneezed in dusty archives, yawned at court sessions and drew caricatures on members of a judiciary board on fields of protocols. More than once the ill-fated lawyer tried to leave service, but couldn’t. Having gone to Berlin to try the luck as the artist and the musician, he nearly died from starving. In the small city of Bamberg Hoffman happened to be the composer and the conductor, the director and the decorator at theater; to write articles and reviews for “The general musical newspaper”; to give lessons of music and even to participate in sale of notes and grand pianos! But it didn’t make neither glory, nor money.

Sometimes, sitting at a window in the tiny room under the roof and looking in the night sky, he thought that affairs in theater will never take a turn for the better; that Julia Mark, his schoolgirl, sings as an angel, and he is ugly, poor and not free; and, in general, life wasn't successful... Julia married to the silly, but rich businessman soon and got away forever.

Hoffman left the grown hateful Bamberg and went at first to Dresden, then to Leipzig, he was nearly killed with a bomb during one of the last Napoleonic fights and at last...

Whether the destiny took pity on him, whether the Saint patron John Chrysostom helped, but once the unlucky conductor took a feather, dipped it in an inkwell and... Here crystal hand bells rang out, golden-green snakes were whispered in foliage and the fairy tale “Gold Pot” was written (1814).

And Hoffmann, finally, found himself and his magical world. However, some guests from this country visited him earlier (“Gentleman Gluck”, 1809). Wonderful stories were soon gathered, and the collection under the name “Imaginations in Callot's Manner” was formed (1814-1815). The book made success, and the author became at once well-known.

“I am similar to the children who were born on Sunday: they see that isn't visible to other people”. Fairy tales and Hoffman's short stories could be ridiculous and terrible, light and ominous, but fantastic, in them arose unexpectedly, from the most ordinary things, from the life. There was a great secret which the first Hoffman guessed. But he didn’t get money or glory from it. And here the writer again compelled to put on a uniform of the adviser of justice, but now in Berlin.

The melancholy overcame, in this "the human desert" period, but nevertheless almost all his best books exactly were written at that time: “Nutcracker and mouse king” (1816), “Crumb Tsakhes” (1819), “Night stories” (very terrible), “Princess Brambilla” (1820), “Everyday views of a cat of Murr”, and many other things. Gradually there was also a circle of friends — the same visionaries romantics, as well as Hoffman. Their cheerful and serious conversations about art, about secrets of human soul and other subjects, were embodied in a four-volume cycle “Brothers Serapionov” (1819-1821).

Hoffmann was full of thoughts, everything seemed to be good, but he wanted to leave it all. The adviser Hoffman as the member of appellate court interceded for unfairly accused person, having caused anger of the police director von Kamptz. Besides, the impudent writer represented this worthy figure of the Prussian state in the story “Master of Fleas” (1822) under the guise of the privy councilor Knarrpanti who at first arrested the criminal, and then selected to him a suitable crime. Von Kamptz in rage complained to the king and ordered to withdraw the manuscript of the story. Against Hoffman initiated lawsuit, and only efforts of friends and a serious illness relieved him from prosecution.

He was almost completely paralyzed, but up to the end didn't lose hope. The story “Angular Window” where the escaping life is grabbed on the fly was the last miracle and is imprinted for us forever. He was 46 years old when passed away. He was buried on the Jerusalem cemetery of Berlin. Jacques Offenbach's opera of "Hoffman's Fairy tale" and M. Bazhan's poem "Night of Hoffman" is devoted to Hoffman's life and his works.

- Hoffman in the name Ernst Theodor Wilhelm changed the last part to Amadeus in honor of the favorite composer Mozart.

- Hoffman is one of the writers who influenced on creativity of E. A. Po, G. F. Lavkrafta, and also M. M. Shemyakina. He had impact on works of the Russian rock musician, the leader of groups Agatha Christie and Gleb Samoyloff & the Matrixx of Gleb Samoylov.

- Ernst Theodor Amadeus Hoffman drew all life. The set of his drawings and some pictures remained. Hoffman obviously gave preference in youth to painting and music, even at twenty-year in one of letters to the friend Gippel there are such lines: “... I don't know who I am: artist or musician?”

- Hoffman daily drank. He began it after moving from capital Berlin to silent Polish Poznan. The dullness and boredom of the provincial town badly affected on mentality of the writer therefore he tried to run away from reality to the world of alcoholic dreams. He with pleasure was treated, after all he was the interesting, talented and witty interlocutor. The habit to drink daily remained with him for the rest of his life.

- In honor of the heroine of work of Hoffman “Princess Brambilla” the asteroid (640) Brambilla was called, which was opened in 1907.

- As the composer created under the pseudonym “Johann Kraysler”.

- The writer was appreciated by Dostoyevsky, having read him both in translation, and in the original.

- Quite often he used literary reception of opposition of the real and fantastic worlds.

- At many works invisibly there are impressions received from the uncle about supernatural forces.

Similar articles
#LITERARY NEWS
‘English Rakugo Show’ took place in Nur-Sultan
2416
#LITERARY NEWS
Astana hosts an Eurasian Literary Forum under a title “The Power of a Word in a Modern World” these days
7347
#LITERARY NEWS
It has been 93 years since the Union of Writers of Qazaqstan was established.
13479