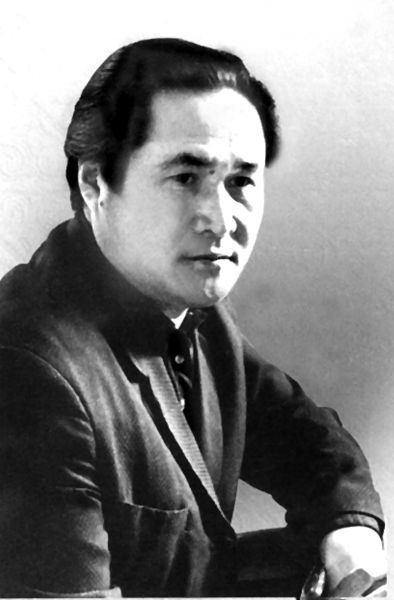 Today 85th anniversary of Mukagali Makatayev. In honour of him, we declare "Mukagali's week" on literary portal.

He was born in a little village of Karasaz, situated at the foothills of the enshrined Khan-Tengri mountain, to become a “shrine” himself. He wrote his first poem at the age of 17, but his first book of poems was published when he was 33 and he had only 12 years to live. He created over 4,000 poems during two months he spent in the hospital due to a serous illness.

Only a fraction of his poems saw the light of the day during his life. The majority of his poems were published after his death. Mukagali Makatayev the poet, the most loved poet of the age with God’s given talent.

He was officially recognized only after his death. He received the highest state titles, orders and honors in 2006, thirty years after his departure.

He is called the Kazakh Pushkin of our times. His colleagues said about him: “He dashed into the literature like a lighting and bedazzled all of us…”. Mukagali is easily recognized by the flow of his poetic lines, by his unique poetic voice. Deep human feelings and emotions he expresses in clear and simple words that reach the hearts of everyone who loves poetry.

From his diary: “The days without poems for me are lifeless. Thank to God for giving me this consolation. A poet has his own world, his own society and his own universe. I live for this and fight for this.”

He was also one of the first poets who brilliantly translated into Kazakh the pieces of world classical literature: Walt Whitman’s “Leaves of Grass”, Shakespeare’s "Sonnets", Dante’s "Divine Comedy" and many others.

His life was full of ordeals: tragically died his eldest daughter (Mukagali had 5 children), he had no house and moved from flat to flat, he lost his job, he lost a big folder with his poetic manuscripts, he went through severe Communist censorship, was harassed by fellow poets and expelled from the Writers’ Association of Kazakhstan and was fighting with his incurable illness.

His last poem was called “Requiem to Mozart”. Mukagali was fascinated by Mozart’s music and he was shocked to learn that there were no last rites served for the great musician. Even today Mozart’s burial place is still unknown. Mozart was buried without burial service in the common grave next to poor people. It seems that Mukagali took over this mission and read the last rites for him by writing “Requiem to Mozart”.

So different they were, but they had a lot in common. Unrecognized in their lifetime they went through the hardships and poverty and both died suddenly in the prime of life: Makataev at 45, Mozart at 35.

They both left a swan song – Requiem.

- If I suddenly sink into oblivion like a bird?

- I will search for you the eternity all my life.

- If I suddenly burn to ashes in the fire?

- I will mingle in the ashes of that fire.

- I will turn into a wind to reach you there.

- If I bring to you the troubles and despair?

- Hush, my darling, I will bear it anywhere.

My biggest happiness in life is you, my people,

And if my people live, it means that I live too.

I give the honey of my poems to my nation

This simple happiness means more than gold to me.

My second happiness is you, my dear native tongue,

The hard stone granite heart I melted with the words,

And all because I always learn from my native tongue,

That taught me all the truth and kindness in the world.

And my third happiness is you, my dear Motherland,

Whoever stands for different things in life, and I will stand for you,

Could an extinguished home fire be lit again?

Come here, my friend and I will share my fire with you.

Three things of happiness lie there on my caring palms,

I am the richest man and no one would deny,

Like bright three suns in the cloudless sky are shining,

And underneath are Atyrau, Alatau and Altai!

Translated from Kazakh by Zeena Urynbassarova

Share:
Similar articles
#LITERARY NEWS
‘English Rakugo Show’ took place in Nur-Sultan
1677
#LITERARY NEWS
Astana hosts an Eurasian Literary Forum under a title “The Power of a Word in a Modern World” these days
3650
#LITERARY NEWS
It has been 93 years since the Union of Writers of Qazaqstan was established.
8768