Yesterday April 8, 2014 one of the talented poets of Kazakhstan Balkybek Amirkhan died.

The Kazakh literature endured one more bereavement. The talented poet, the publicist, the critic and journalist Balkybek Amirkhan died yesterday April 8, 2014 because of unhealthy heart. 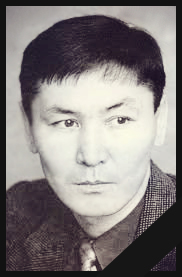 In 1989-1990 worked as the correspondent in the regional newspaper «Osken onir». In 1995 graduated from the Faculty of Journalismthe of Al-Farabi Kazakh national university.

In 1995-2000 worked in such republican printing editions, as «Parasat», «Zhas Alash» and «Ana tili». Worked as a manager in department of literary criticism, in the  Kazak adebieti newspaper. During the last years he was an editor of the Dala men kala newspaper
His poems were published in such collective editions as «Auldan ushkan akkular», «Tolkynan tolkyn tauady», «Zhas akyndar poeziyasynyn antologuiyasy».

The collective of Literary portal brings the condolences to the poet’s relatives, friends and to all Kazakh people.