Nursultan Abishevich Nazarbayev was born on July 6, 1940 in the village of Chemolgan Kaskelen district of Almaty region. In 1967 he graduated from the factory-technical college at the Karaganda Metallurgical Combine, Kazakhstan. 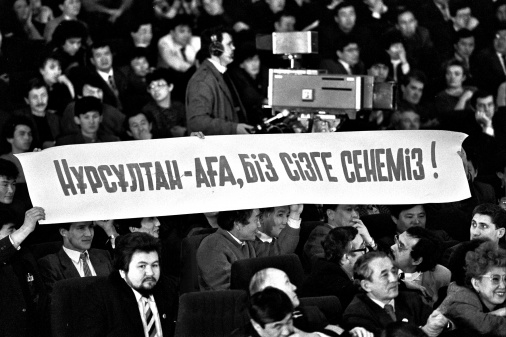 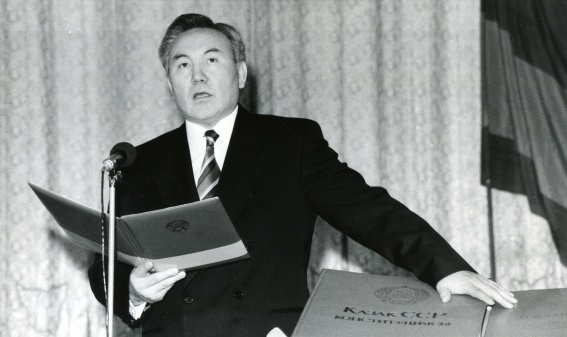 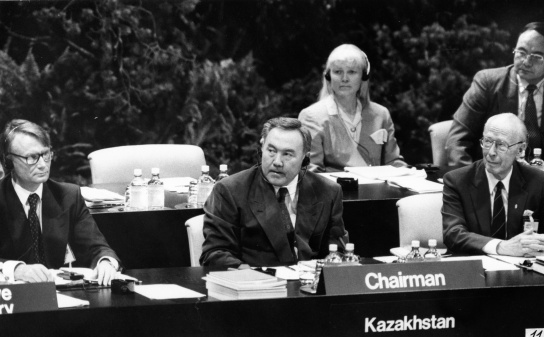 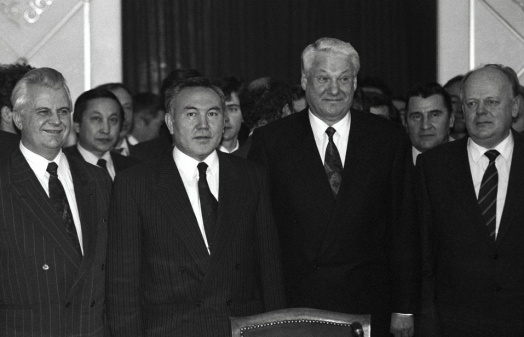 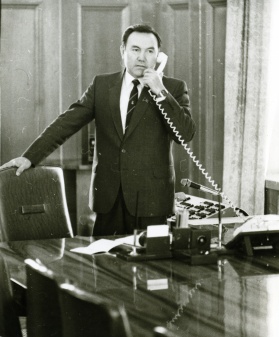 Photographs by www.akorda.kz - OFFICIAL SITE OF THE
PRESIDENT OF THE REPUBLIC OF KAZAKHSTAN

This book reviews the activities of the Communist Party to establish a metallurgical base in the Kazakh SSR. The author-Nursultan Abishevich Nazarbayev, who began his working career at the metallurgical plant, was a participant and eyewitness of many accomplishments for this young company. The book of President of Kazakhstan  - a living testimony to the construction and development of the Kazakhstan Magnitka, becoming its cohesive multiethnic staff, the heyday of creative thought and initiative laborers of the Karaganda Metallurgical Plant. 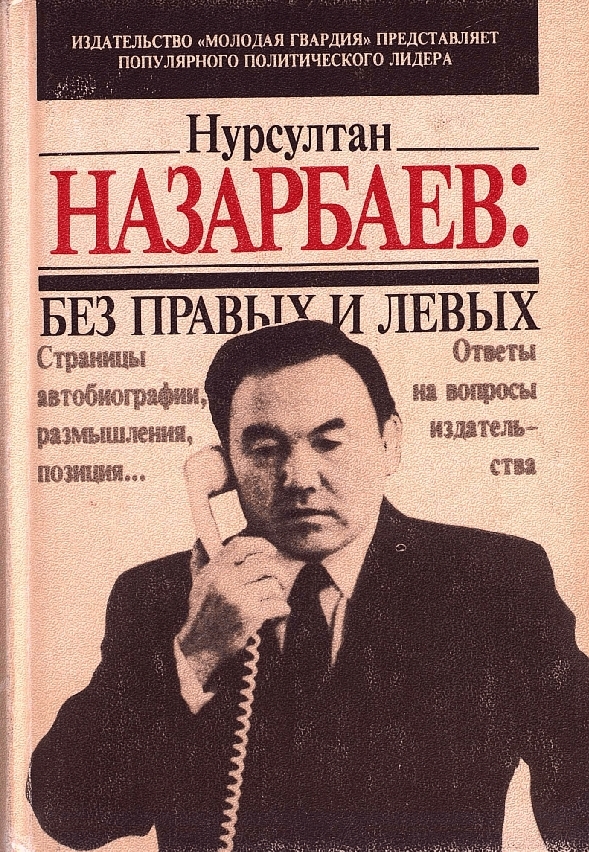 ACTUAL PROBLEMS OF RESOURCES AND OPTIMAL RESOURCE CONSUMPTION ARE CONSIDERED FROM THE STANDPOINT OF ECONOMIC REFORMS AND ESTABLISHMENT OF MARKET RELATIONS, CHANGES OF OWNERSHIP AND OTHER RADICAL SOCIAL REFORMS AS A CONDITION FOR OVERCOMING THE CRISIS IN THE ECONOMY OF THE

Nazarbayev N.A. -  The IDEOLOGICAL CONSOLIDATION OF SOCIETY - &nbsp;AS A CONDITION OF KAZAKHSTAN PROGRESS - 1993

In this book, Nursultan Abishevich shares his thoughts, conclusions, which formed by him for many years. Illustrating his conclusions with concrete facts Nursultan Abishevich Nazarbayev expresses the interesting thoughts on the ideological platform consolidation, socio-political and economic processes taking place in the Republic of Kazakhstan.

Nazarbayev N.A. -  PROJECT ON THE FORMATION OF Eurasian Union Countries - 1994

The book has absorbed the profound reflections of the President of Kazakhstan Nursultan Nazarbayev on the fate of the peoples of the former Soviet Union.

The book substantiates the conclusions and proposals for improving the efficiency of privatization, the transfer of the economy to intensive development.

The report on 150-year anniversary celebration of  Abay by President of the Republic of Kazakhstan Nursultan Abishevich Nazarbayev. 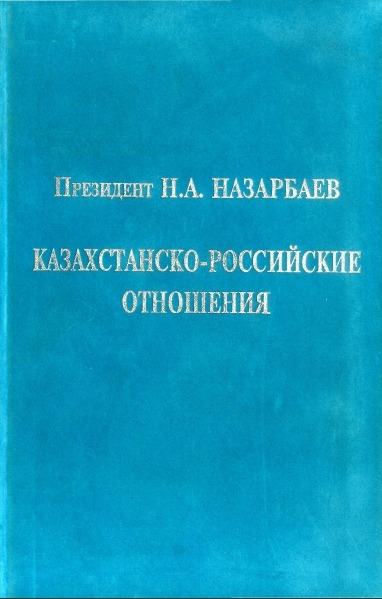 The collection of reports, speeches and articles of the President of of the Republic of Kazakhstan Nursultan Nazarbayev devoted to the Kazakh-Russian relations.

Life itself has shown great practical value of ideas and proposals on the establishment of Nursultan Nazarbayev in the territory of the former Soviet Union of the Eurasian Union. These ideas are very close to the people, for thousands of years living together in a single space.
The book includes articles, speeches, publications of the author in the period from 1994 to 1997, As well as other materials, to develop this theme.

The history of the Kazakh people is unique both in evolutionary development, and content. It is full of the greatest tests for quality control, persistence, courage and dignity of the Kazakhs. More than once we found ourselves on the brink of extinction, but always had the strength for rebirth. History remembers how the Kazakhs, like a phoenix, reborn again from nothing and began to move in the great caravan of world civilization.
In this work, the author - Nursultan Abishevich Nazarbayev, reflecting on the history of their people, addresses some fundamental lessons of the past, reflects on the historic path of the Kazakh people, stops at the problem of development of spiritual heritage

Nazarbayev N.A. -  STRATEGY OF transformation of society and the revival of the Eurasian civilization - 2002

The book contains material works and speeches of the President of the Republic of Kazakhstan Nursultan Abishevich  Nazarbayev's strategy of transformation of society and social and economic development of Kazakhstan till 2030, establishment of socially oriented, efficient market economy and integration into the framework of the CIS, the revival of the Eurasian civilization.

The book says about the main directions of Kazakhstan's domestic and foreign policy, also contains an assessment of the implementation of long-term strategy.The book contains letters, statements, and reports of the Head of State about the main directions of domestic and foreign policy of the Republic of Kazakhstan, on the implementation of a long-term strategy of independence.

One of the major problems in the early nineties for Kazakhstan was the need to select the path in the transition period. And not only for Kazakhstan, but also for all other post-Soviet countries. Mark the beginning and the middle of the '90s have been in the wake of heated debates filled political reform proposals, a variety of interpretations of the current situation, and often accusations against each other. Around that time, a book of Nursultran Abishevich  Nazarbayev, which we all know - "On the threshold of the XXI century". Since all of the then discussion addressed issues of state and society, they somehow affect and state power, and, of course, a large part of the participants of those battles criticized the government's policy, which has been the embodiment of the figure of the President. The book "On the eve of the XXI Century" was the proper response to opponents, and it covers the main range of issues at the time, which included the author's position on the Soviet past, the wording of their own vision of reform in politics and economics, and look at the role of Kazakhstan in the region and in the world, on his "civilizational dislocation."

President Nursultan Nazarbayev's book tells about the changes and developments that have occurred in the world and in the Republic of Kazakhstan in the last 10 years.

Book the First President of the Republic of Kazakhstan the most complicated and striking moments in the modern history of Kazakhstan. Each of the nine chapters reveals the symbolic steps towards the formation of the young independent state. This work on the Development Strategy of Kazakhstan until 2030, the process of making the current Constitution of the country, the beginning of the development of oil and gas resources, putting the national currency and the creation of a successful banking system.

The collection includes the sayings of the First President of Kazakhstan Nursultan Nazarbayev drawn from his books, reports, speeches. Oratory of  Nursultan Nazarbayev, has long valued and appreciated by connoisseurs of literature, it is the subject of unflagging public attention. Many of his sayings are well known among the people, and, without losing print personality of its author, it is widely played in the social and political practice.This publication is a continuation of the previously seen the light in the Kazakh language collections "Tugan elim - tіregіm" (2001), "Ozekzhardy oylar" (2003), "Oi bolіstіm halqymmen" (2006).Rich and different genres material books combined into thematic chapters that reflect the most important aspects of public life.

First President of Kazakhstan decided to unite in this book pages of diary entries of the capital Astana. Complicated solutions assistance to colleagues, architectural search, thoughts about the city's future, legends and place names edge, household items, historical analogies, landscape and aesthetics of Astana, in a word, thought, and the President of the things devoted to the new capital - they are all here

In the presented book the reader will see the politician that recognized   on a global scale and a great scientist - the President of the Republic of Kazakhstan Nursultan Nazarbayev. Book contains his writings and speeches on the problems of a new phase of implementation of the Strategy "Kazakhstan-2030" and the formation of post-industrial society; integration priorities and mechanisms of partnership of civilizations. The book analyzes the process of comprehensive modernization of Kazakhstan and increase the competitiveness of the nation: from stability - through modernization - to prosperity.Economic diversification and sustainable growth are shown in the context of a specific industrial innovation strategy of Kazakhstan. Disclosed multi-vector of Kazakhstan's foreign policy, the strategic partnership between Russia and Kazakhstan, the deepening integration of the CIS states in the focus of Eurasia, the development of the global energy and ecological strategy. The book gives comments of famous Russian scientists on the experience of the qualitative development of economy and social sphere in Kazakhstan.Scientific work of Nursultan Abishevich Nazarbayev allows to understand the results of the transformation of society, its movement towards a post-industrial model to assess the effectiveness of social and economic policy. The book will be useful and fruitful for both scholars and statesmen, and for the younger generations, in whose hands - the fate of nations and the world.

The waves of global crisis which have swept across our planet since the beginning of the present millennium shouid prompt us to reflect ever more deeply on the fate which the whole of mankind now shares. It is becoming clearer than ever how far the development of world society and the local communities within it are interconnected and interdependent, and how important it is to combine the efforts of countries and peoples in the search for mutual survival, weU-being and prosperity.

In the first volume of a multivolume publication presents the key public appearances of the First President of the Republic of Kazakhstan Nursultan Nazarbayev for the period 1989-1991. It highlights the events of the last years of perestroika until Kazakhstan's independence, when the disintegration of the USSR there was a process of self-determination of the historical people of Kazakhstan in favor of sovereignty, democracy and the free market.


The second volume presents the key public appearances of the First President of the Republic of Kazakhstan for the period 1991-1995. It highlights the events of the first years of independence of Kazakhstan - one of the most intense and defined in terms of state-building stages, when there was the dismantling of the totalitarian system, and was a process of searching for a new model of the state and the market economy.

In the third volume of a multivolume edition of "Nazarbayev. Selected speeches "are the key public appearances of the First President of the Republic of Kazakhstan Nursultan Nazarbayev for the years 1995-1998. During this period, on the basis of the 1995 Constitution we continued systemic changes in political, economic, social and humanitarian spheres, adopted the strategic program "Kazakhstan-2030", carried out the transfer of the capital from Almaty to Akmola, carried out a constitutional reform in 1998.

Share:
Similar articles
#LITERARY NEWS
‘English Rakugo Show’ took place in Nur-Sultan
1683
#LITERARY NEWS
Astana hosts an Eurasian Literary Forum under a title “The Power of a Word in a Modern World” these days
3676
#LITERARY NEWS
It has been 93 years since the Union of Writers of Qazaqstan was established.
8838