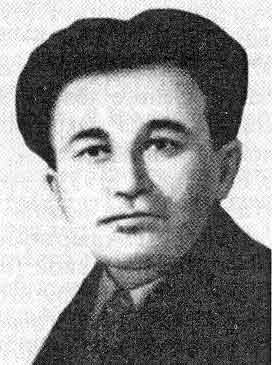 Mazhit Boranbaevich Dauletbaev was born in 1896 in Nurin-sky district of Karaganda region. Soon, his father and his family moved to the city of Petropavlovsk.

In 1917, M. Dauletbaev entered the Omsk Pedagogical Seminary, from which he graduated two years later.

After October 1917, in the orbit of the class struggle was dragged also a literature. Mazhit Dauletbaev took active part in it as fully shared the ideas of socialism, which is reflected in his work.

In the book "School of Life"  Sabit Mukanov describes the event that occurred in the 20-ies in Petropavlovsk, which was attended also by Mazhit Dauletbaev. The chief of the local police and   were unhappy that in the city were arranged poetry evening of Magzhan Zhumabayev, where he reads his  poetry. And they conspired to disrupt the upcoming evening, inviting speakers for the young proletarian poets and writers of young Kazakh poets and writers.

Baimagambetov Poems about October, the Civil War and about the Soviet system had read his school friend, a Communist journalist Abdrahman Aysarin. Poems-pamphlets about the bourgeoisie,  had read the poet Mazhit Dauletbaev. Listeners with  happy  accepted Baybatyr Yerzhanov's satires ridiculing some religious clergy ... In short, Petropavlovsk revealed a whole galaxy of young Kazakh poets and writers.

In 1918-1920 he was a teacher in the School at Petropavl region, 1921-1922, he worked as head of the the editorial board department of the Guberniya newspaper  in the Kazakh language "Bostandyq Tu" ("The Banner of Freedom"), published in Petropavlovsk.

In 1922-1924 he studied in Moscow at the Communist University of the Laborers of the East named after Iosif Stalin (KUTV- CULE).

After graduating from Moscow Communist Institute of Journalism in 1927-1929 he worked in the editorial office of the republican newspaper "Enbekshi Kazakh" ( Laborer Kazakh).

Then - in the apparatus of Union of Writers of Kazakhstan. He was a member the Communist Party.

Since 1920, poetry, essays, satires, Davletbaev's critical articles were published regularly on the pages of Kazakh national newspapers and magazines.

In addition to journalistic performances in newspapers Mazhit Dauletbaev since 1922 begins to actively work in the field of Kazakh art. He publishes articles about Kazakh Theatre, the national music.

The Kazakh press often published poetry, essays, short stories Mazhit Dauletbaev. In 1927 he published two poetry books - "Collected Poems" and "Poems of Mazhit" in 1930 comedy "Sopakbastlar", in 1932 the book "From the Heart" and artistic essay "Drummer Mashaev", in 1933 the brochure "Two steps "," Cultural centers "and a collection of poems" Songs of socialism. "

In 1933, M. Dauletbaev created a novel "Partisans", which two years later was translated into Russian. his novel "Kyzylzhar" published in 1935.

Davletbaev's written comedy "Suwrpaqbay" (1930). The first book of the trilogy, the novel "Kyzyl Zhar" ( "Krasny Yar") about the events of 1916 and the Civil War came out in 1935, the second and third books of the novel remained unfinished.

A lot of attention M. Dauletbaev gave to  translation activities. He translated into Kazakh the works of many Russian and foreign classics ("Hamlet" by William Shakespeare, "All Quiet on the Western Front" by E.M. Remarque, "Marriage" by Nikolai Gogol, "Young years of Marx" GI Serebryakova , "War" N.S. Tikhonov, "Iron stream" Serafimovich N.S., the poem "The Bronze horseman" and many poems of Pushkin, and a number of works of Maxim Gorky, Anton Chekhov, Alexander Fadeyev and many other writers of Western European and Russian literatury).

Mazhit Dauletbaev was a friend of Saken Seifullin. And, perhaps, it has played a fatal role. As Seifullin, he was arrested and executed in 1938. After Stalin's death, posthumously rehabilitated.

Mountain of Ala-Tau, mountain that has steep forehead,
On your chest bears the sky clouds.
And you look into the distance with undisguised malice
The spring sun has not come out yet,
In a green valley, admiring thee
Heaving the city of Alma-Aty.

He drowned in the surf of white coloured gardens,
He was young, as my young dream.
Oh, .City of aport - carpet from Iran,
Filled with a clear beat of the day,
You "became the guiding star of Kazakhstan,
With your radiant force beckoning.

... And just yesterday on the village lanes
Dogs roamed, tails between their legs,
And, shouting flew nimble bird,
Without fear of sitting down on the dry bushes.

But you're young, all decorated with flowers.
On the streets of poplars are standing by formation.
It comes to you with thunderstorms
In the long nights of spring flavor ...

Dressed in paving blocks straight,
In rushed the water pipes under the ground
And streaks of light, like sentinels,
They stand at night over rarefied darkness.

Good crowded all the shops,
Elegant crowd going and going
I praise you, Blue Valley
Yet creating valiant work.

Moscow has become a mother you loved!
And Lenin's city shakes your hand ...
And the joy of power, driven along the streets,
I sing a song flourishing city.