Home Literary process Astana - the adulthood of the young capital

Astana - the adulthood of the young capital 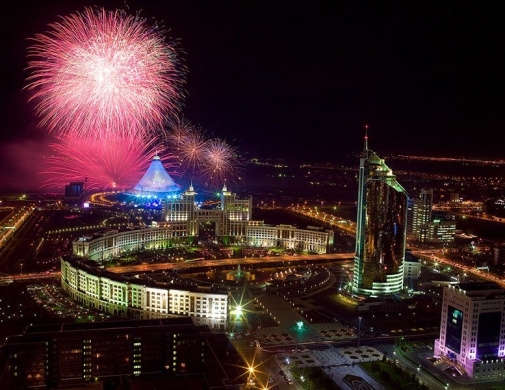 A culinary festival turned in the old town square. 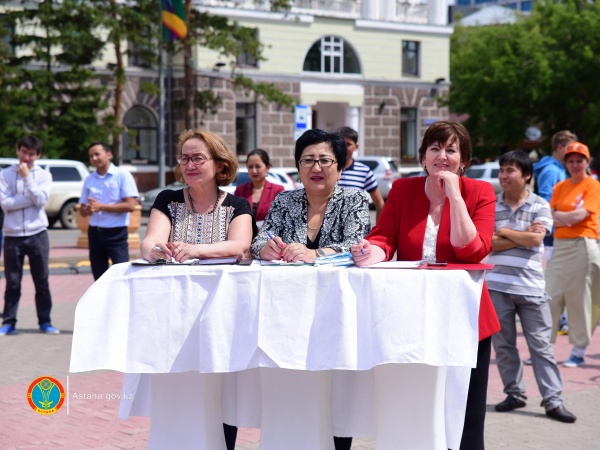 On the Old Town Square was opened already the fourth culinary festival called "Skills of culinary experts  - for beloved city". It will last until 6 July, in these three days, anyone can see how goes the battle for the title of best waiter, bartender and chef. 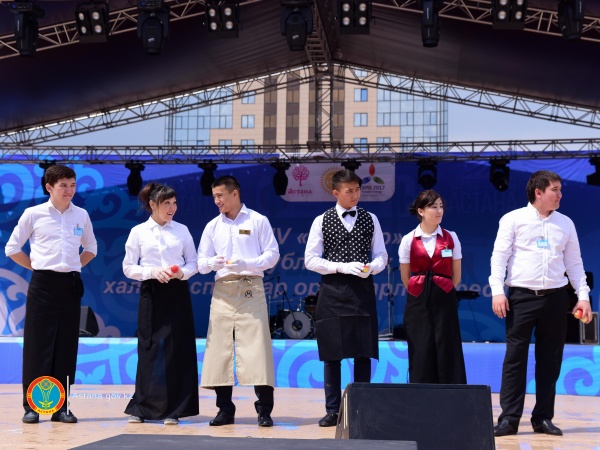 Today, the jury determined the best waiter. The competition was attended by seven of the contestants, they represented the metropolitan restaurants, coffee houses and pastry bakers. 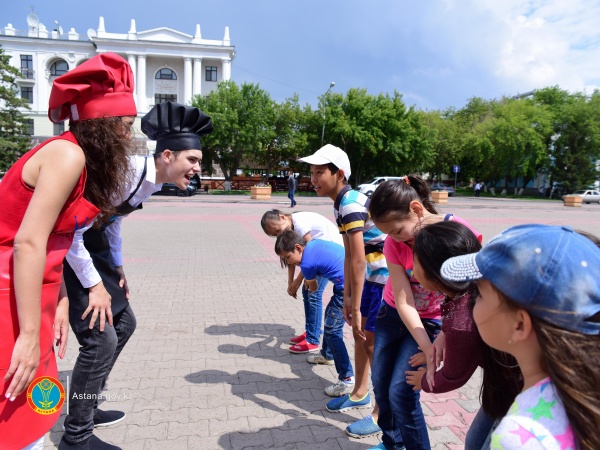 The competition was held in two phases, the first - the waiters had to demonstrate their skills. Their task was to stay on the Segway, holding a tray of glasses, and bring order to the tables, with nothing spilling. In the second round the participants had a much more difficult: a few waiters failed in three attempts to throw apples in glasses. 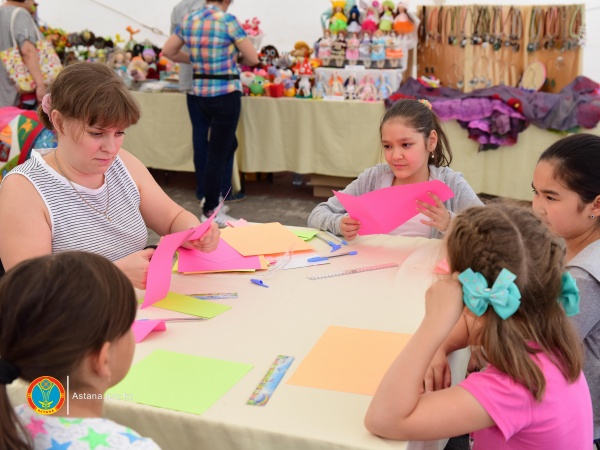 Upon completion of all phases of the jury unanimously chose the winner - Amanzholov Kuat. During the first day of the festival competition between stages were Kazakhstani stars: singers, musicians and dancers. 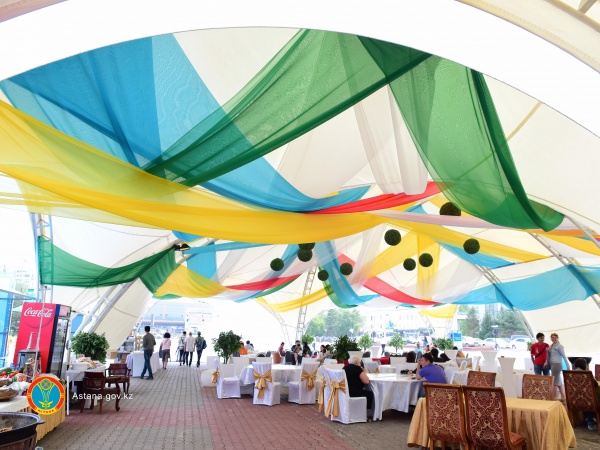 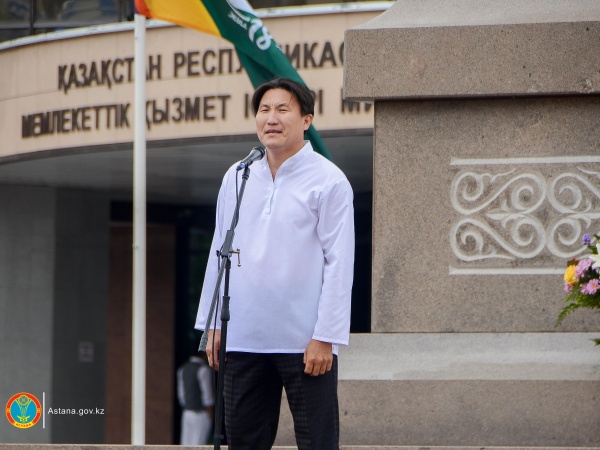 Feast of books and poetry is not the first attaches to read the book and both adults and young readers of the city.This year the festival participants pleased with the presentation of the book "Collected Poems" by F. Ongarsynova, theatrical performance "Abaydyn Ruhy", by reading the works of A. Bokeikhanov and M. Makatayev and Promotions "Time to read". To the audience were presented works about the life of Abay. Actors of Kazakh Music and Drama Theatre named after Kuanyshbayev could convey the dream of outstanding figures of the East to see his people enlightened. The entire history of independence has been presented on a specially established stands. Thematically, the exhibition was divided into several sections. Collected in the Centralized Library System of the book collections tell about historical figures, about Astana as a new project in Kazakhstan, as well as the upcoming EXPO-2017. Participation in the celebration was the capital and poets. In Bokeykhanov's readings flashed their skills Bostanova Zhansaya, Turganbekova Karakat, Aubakirov Rauan, Orynbekova Zhasmin.- By promotions "Time to read" we are trying to attract more people to read. We are very pleased that the younger generation is interested in self-development. In this regard, we continue to organize activities for children and in the summer. This - book lovers meeting under the open sky. While in the capital rainy, but soon we will resume these meetings. People come to us are not only children but also their parents. For example, at the event "Together with my dad will be able to all" children with their parents took part in the competitions, representing crafts. Also, young readers interested in the benefits for the Study of the Kazakh language. There are children who does not speak Russian, so we try to help in this case - said the senior lecturer of the Central Youth library Oralova Valentina.

Art Fest is waiting for visitors and city dwellers. 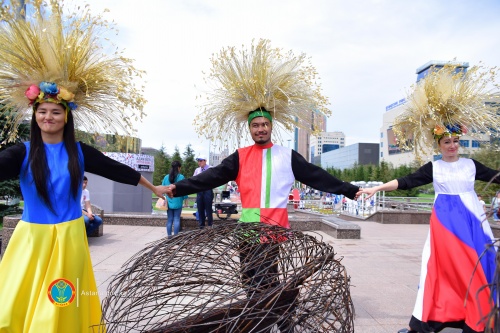 Today, the grand opening of Astana Art Fest 2016. Hundreds of citizens gathered in the square of NurZhol Boulevard to see the new trends of contemporary art.Dedicated to the celebration of Capital Day Festival held in the city for the second time. Today, Water-Green (NurZhol) Boulevard has become a platform where art show unfolded, reflecting the theme of the upcoming exhibition EXPO-2017 - "Human Energy". 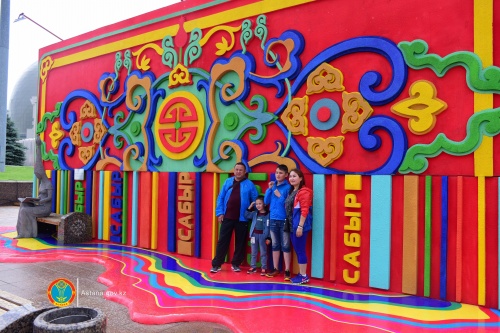 For three days, from July 4 to 6 in the open air will work the original installation and theatrical performances, pavilions digital art and industrial design, outdoor art forum and poetry lab, as well as exhibitions of architects, media artists. Each evening, everyone will be able to enjoy performances by DJs and dance shows. 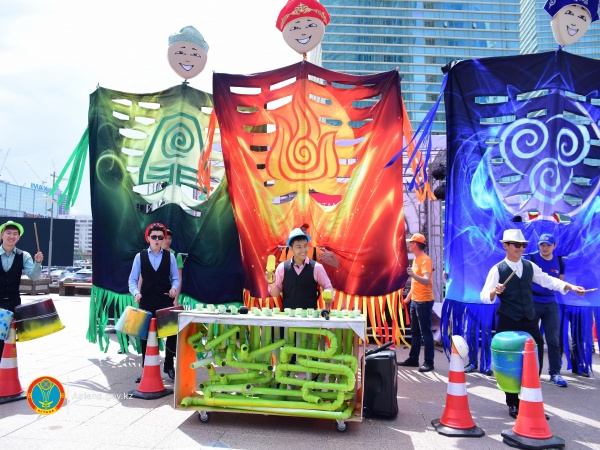 For three days, Art Fest will bring together the creative intelligentsia, representatives of various directions and genres of the art world, musicians, choreographers and scholars. Where representatives of various fields will share their experiences and learn about new products, trends, today's trends and the newest art technologies. The original work of the participants from Kazakhstan and the near abroad delight spectators with their beauty, as well as children's playgrounds will last all summer. 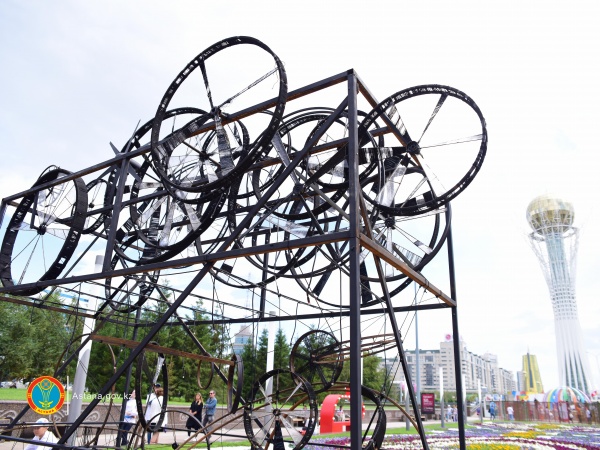 This year festival organizers have prepared a surprise. A novelty will be the laboratory of media poetry. Here in the eyes of the public will be created bright improvisation that combine poetic word and music. Amaze  the audience withtheir entertainment  will also the Theater block that creates by theatrical artists. All installation, united by the theme of the upcoming exhibition of EXPO-2017 and its components - water, solar and air. At the site in the form of costumed character puppets will entertain guests and symbols talismans of these elements - Tengri and Kaskyr. Also, viewers are waiting for interactive creative performances, where with the help of sunlight on the plywood sheet will be created colorful drawings. Draw such an unusual way will be able to anyone. 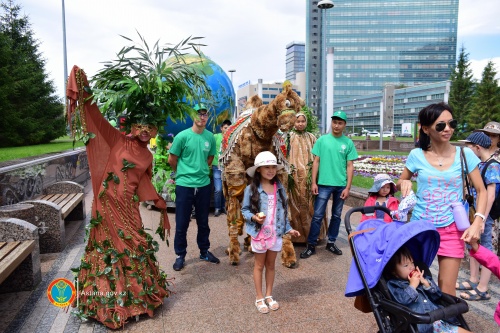 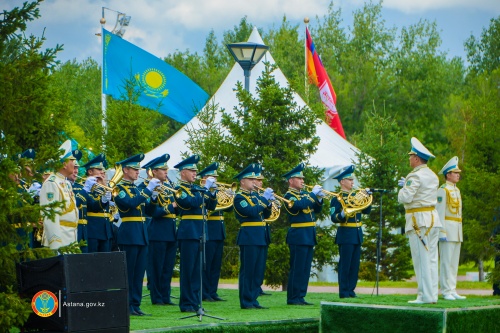 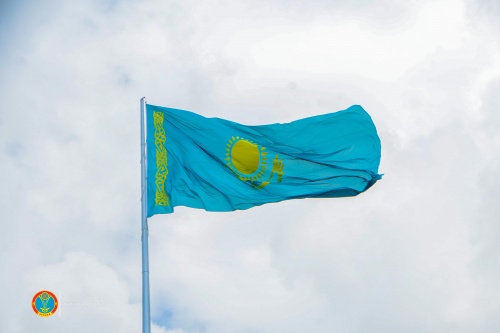 - This is a proud symbol of the country's 25th anniversary of Independence Returning that we meet this year. Under this heavenly flag together we build up the history of sovereign Kazakhstan. Just a quarter of a century we have been able to build a strong building a strong state. Recently our country was elected a non-permanent member of the UN Security Council. The international community has entrusted the mission of Kazakstan high involvement in promoting peace and security in the world. It is recognition of the high authority of our country and the success of its development. Work in the UN Security Council will make even more recognized our flag, - said the President of Kazakstan. The head of state congratulated all the graduates of higher military educational institutions of the republic, noting that Kazakhstan patriotism manifests itself in a variety of areas, primarily in the service of their homeland. - Today, we hand officers' epaulettes to the best graduates of higher military educational institutions. These days, thousands of young Kazakhstanis finish school and enter adulthood. You start your journey in a festive atmosphere, mainly by the country's flag. It is no coincidence, since you have chosen a special profession, which is a matter of respect in society. This profession - to defend the Motherland. conductive Day of Capital and wished everyone peace, tranquility and well-being. A few years besides you gave to easily assimilate knowledge, acquire new skills, to understand the value of friendship and mutual assistance. Now we have to apply all this in practice, - Nursultan Nazarbayev said. 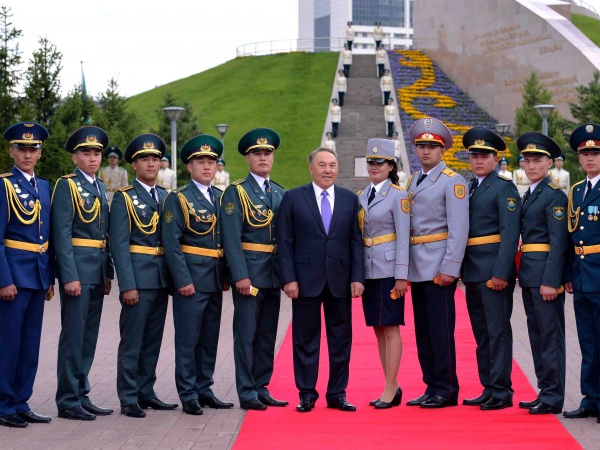 The President of Kazakstan noted that the National Flag raising ceremony traditionally opens the events dedicated to the Day of the capital. - This year we are celebrating the 18th anniversary of Astana as capital - the age of majority and adulthood. This is a time when the already conquered large peaks, and with them new perspectives become visible. Astana is growing rapidly birth of an independent Returned Capital, changing for the better. The city is at the forefront of the country, integrating it and inspire new achievements, - Head of State said. Nursultan Abishevich Nazarbayev also announced the birth of one million inhabitant of the capital.- I want a great pleasure to announce that this morning was born one million inhabitant of the city Astana - In Mukhamedyarov's family in which mother - a kindergarten teacher, father - Wiring electrician. Now our capital - the city-million citizen, - said the President of Kazakstan.In conclusion, the head of state congratulated all Kazakhstanis on the upcoming Day of Capital and wished everyone peace, serenity and well-being. 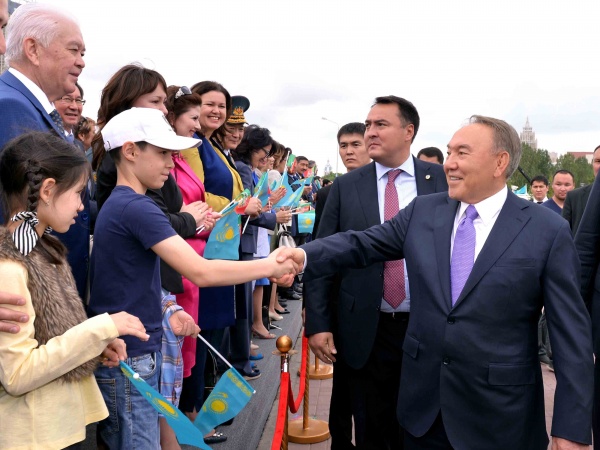 Similar articles
#LITERARY NEWS
‘English Rakugo Show’ took place in Nur-Sultan
1799
#LITERARY NEWS
Astana hosts an Eurasian Literary Forum under a title “The Power of a Word in a Modern World” these days
4131
#LITERARY NEWS
It has been 93 years since the Union of Writers of Qazaqstan was established.
9759