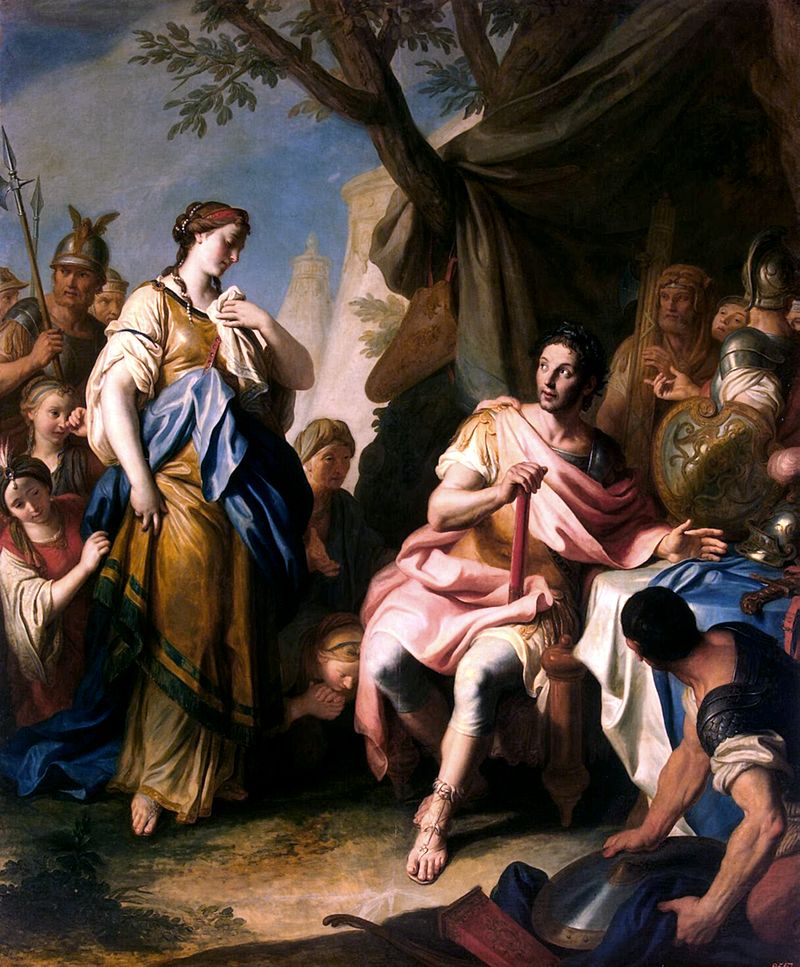 Alexander the Great far back as BC ceased to be just a historical figure - each piece of literature is marked by a particular interpretation of the image of the great commander. Unfortunately, we can not judge the degree of objectivity of each of them, but in any case, to follow this path of development is extremely interesting. From the outset - since antiquity - there were historical and literary narrative traditions about Alexander the Great. So, Flavius Arrian wrote a historical chronicle of the campaigns of Alexander, which is so called "Campaigns of Alexander". This is really the most reliable and objective history of the conquest of the Macedonian the Great, without personal evaluation of author events and actions of the commander. In the literature, the first who decided to write about Alexander, Callisthenes was the nephew of Aristotle  , but many researchers doubt this theory, as Callisthenes was exiled by Alexander , and some claim that the executed. Whatever the case may, the author of "The Romance of Alexander" indicate Pseudo-Callisthenes, since it is possible that several people worked on it. Perhaps the most famous literary interpretation of Alexander belongs to Plutarch, namely his "Comparative biography". This is where you can learn about the personality of Alexander, his habits, character. Plutarch in creating the biography of the king rested, of course, on the historical facts, noting important dates, as well as numerous anecdotes, legends and gossip Having closed tight ring around Alexander. However, he does not believe the majority of them over many of them ironically, but ignore them he can not: they have become part of the history of the Macedonian ruler. "According to Plutarch, Alexander - a noble and ambitious aesthetic, the king and the king-philosopher-politician, to reshape the world, a man of exceptional talents and generous soul" E.A. Kostyukhin "Alexander the Great in the literary and folk traditions". 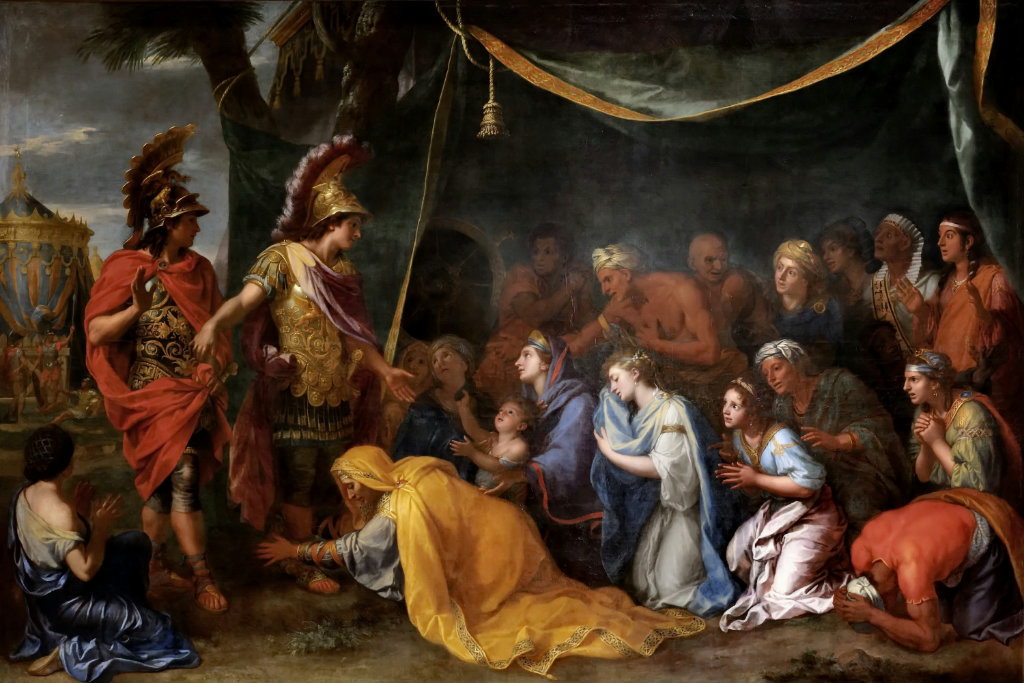 In the Middle Ages the image undergoes a significant transformation: now the ball-dance is ruled by romance. Now Alexander the Great - a knight, an aristocrat who has received refined upbringing, studied grammar, dialectic, rhetoric, arithmetic, music. In his teachers, in addition to the previously known to us, the Greeks, now the Egyptian sorcerer Nectanebo. His equipment such what it should be in a true knight: impenetrable coat of mail, a magic sword, helmet Cornish of King Arthur. German poet Rudolf von Ems created a poetic image of the king, noble, honest and good, it serves the queen of the Amazons Talistrii whom he loves. But to the East besides military campaigns and following them money, power,  adventure - nothing attracts Alexander, unlike the ancient novel, in which he primarily concerned with philosophical questions. 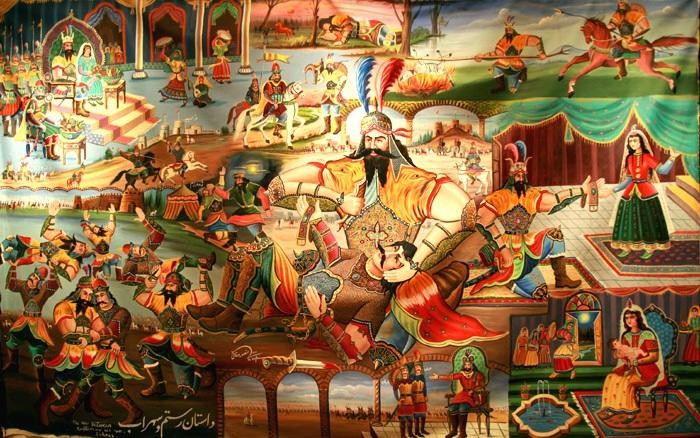 In the eastern literature about Alexander wrote Ferdowsi, Nizami, Navoi, and each of them did not write a dull retelling the biography of Alexander, as an independent, full "glare Renaissance ideas" work. So, Ferdowsi in "Shahnameh" Alexander the Great - the Shah of Persia on named Iskander, which glorified the exploits and numerous successful campaigns. His Persian origin, and Darius - his brother, which, however, did not prevent them to fight each other. Historical facts are closely interwoven with folklore, and in Ferdowsi clearly dominated the second. Throughout the narrative image Iskander does not undergo significant changes: it is still the same beautiful warrior, a wise ruler, and, with all this, and still an adventurer. What Ferdowsi borrowed from ancient authors, so this dual character Iskander, so be perceived either as a great reformer or as a tyrant. On the whole story of Ferdowsi about Iskander optimistic, it contains reflections of deep faith future creators of the Renaissance in the greatness of man. 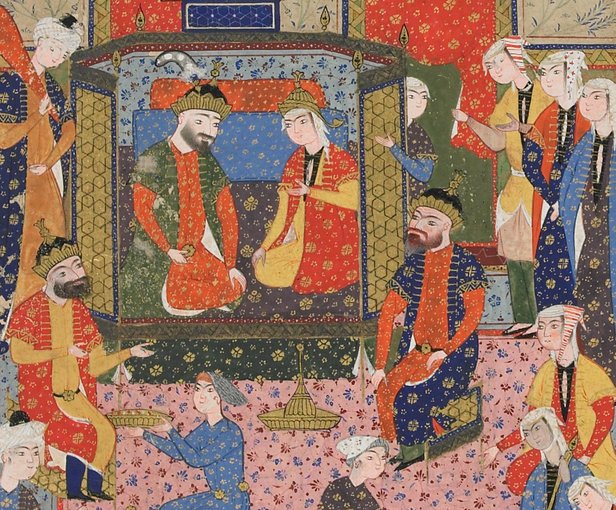 Nizami wrote "Iskander-name" shortly before his death, therefore it is considered a testament of the poet, summing up the results of the creative. In addition, "Iskander-name" - it is nothing less than the most genuine guide to management of the country. Nizami creates an image of the ideal ruler, but in the future, seeing its many imperfections, comes to the conclusion that it is - a pipe dream. Still Iskander will take the necessary path to truth, overcoming their own shortcomings and errors. Just ideal king can not be, the more that is much more important to live the earthly and fleeting life is right to be prepared for an eternal heavenly life. Like the Sufis, Nizami recognizes this division, but, unlike them, he did not care how life on earth will be held, it is for him - not less important segment of life, man, than what awaits him after her. "Nizami discloses  Iskander's activities in three aspects: the conqueror horizons, sage and prophet, and these three characteristics are the successive stages of its development. The ideal ruler - the lowest level in the Iskandar development. True greatness it reaches only after mastering the wisdom accumulated by scientists, philosophers, and the achievement of the prophetic dignity." E.A. Kostyukhin.  Before proceeding to the poem of Abai "Iskander", which is very different from the previous ones, first of all, a completely different imago of Alexander, let us remember the Kazakh folklore. In fairy tales of the Kazakh people Iskander mentioned several times, the most important thing in them - the motive opening secrets of the king, his exposure. "In the Kazakh tale recorded in the last century by D.I.Evarnitski, explains that the King Iskander was born two-horned. He conceals his horns, executes all his shaving barbers. One of them, fleeing, confides the secret of the well in the desolate steppe. But the words for a long time could not lie down, jumping and rolling in the wilderness, they came to the people. On hearing this, one of the enemy crept up to the Iskander and cut off one horn. Weakened Iskander no longer able to make trips. Sent for living water, but to drink it Iskander failed. Deprived of power, the king soon fell ill and died." S.K. Satpayeva.  Another legend of Iskander in Kazakh literature - the sacred source of immortality, which the king found out, but could not take advantage of it. This plot is used by Ybyrai Altynsarin not admired deeds of Iskander, but on the contrary, a negative relation to them. In his mind, a ruthless conqueror and a despot can not have immortal life and glory: "The water did not go down his throat invigorating jet ... ". So we have developed a completely different attitude towards the Macedonian king, and so there is a good reason in the Kazakh literature. Historically was the thing that, in the nomadic steppe primarily respected not the power of the Khans, but the courage, nobility and honesty warriors, not by chance that they are devoted to the greatest epics of the Kazakh people - "Koblandy Batyr", "Alpamys", "Kambar batyr" and many others. That is why the Kazakh literature formed a critical, sometimes negative attitude to Iskander. Before the write his own version of the poem Iskander, Abay studied all the historical and literary sources. He was much heavier than its predecessors, understand that meeting the legends, speculations, rumors and speculation that surrounded the commander. And because of Abai became possible to see under the cover of the legends of Alexander, not with a magic sword in the hands of the Egyptian sorcerer or surrounded by,  living with his human weaknesses. Not the last role was played by the emergence at that time in the Kazakh literature of critical realism that helped to portray a greedy ruler Iskander, as it was the opinion of the Abay:

Already last fall neighbor -
And all the rest is not him!
Then suddenly I thought of Iskander
Conquer the whole world.

Iskander is vain, and therefore loves flattery, it is unjust and cruel:

Blood and angry boar and wild,
The people he used to despise.
The courtiers wonder called
His Lord of Lords.

Historians say that the campaign for the Syr Darya was the most difficult for Alexander himself, and for his troops. Obviously, Abay used this historical fact in his poem, as it is fit in the character of the king, portrayed them. Dying of thirst Iskander crouches to the life-giving source, but the anguish suffered did not change it:

Exclaimed the king, "Wow!
Get drunk! Nice water!
And we'll go. And there, in the valley,
We will conquer the city!

Popey and watered the horse!
There is not stronger than me,
In rich countries, probably,
Brook takes us, ringing. "

Do you remember the legend of the water of immortality and Iskander was widespread in Kazakh folklore, but Abay differently it is working. His character is suffering from thirst, making its bloody path of the conqueror, and encounters the sacred spring. According to the laws of realism Kazakh poet delineates this more insatiable Iskander and criminality of his actions.

And it was the army before the gorge
The country of golden gate.
But on the gate it was a castle,
King applied myself, so much so that sweating ..
But I began to consult with the army:
Open the gates, he could not!

Who is surrounded by sycophancy -
That tyrant. He was and is,
Our Iskander - all the time heard
He just flattery on all sides. 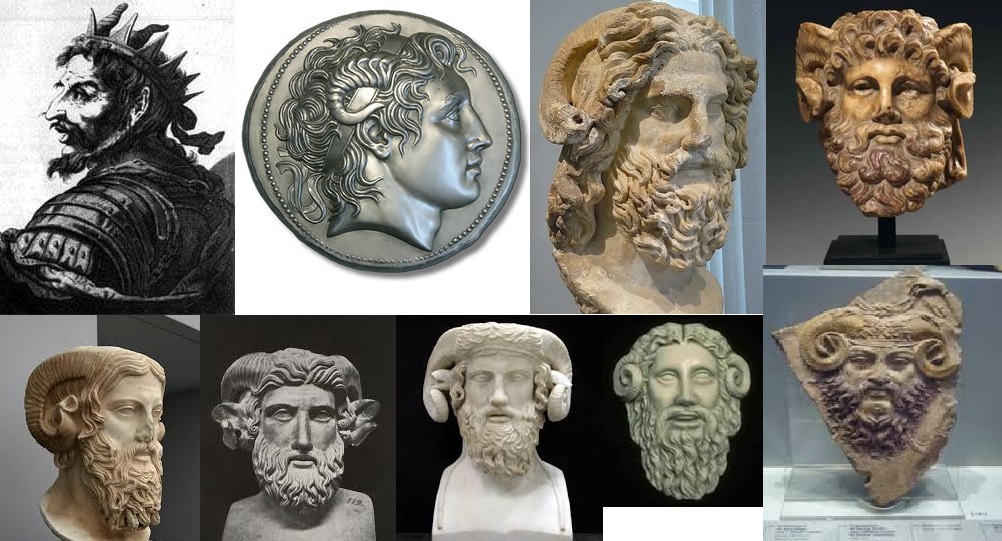 The gate does not open,  handed the bundle Iskander, in which he reveals the orbital bone. Angered by the king wants to throw a bone, but his wise teacher advises him not to hurry. He begins to weigh the bone, and it outweighs the gold and chain mail, because "greedy, Feb / human gaze. Hellish work / eyes saturate! ".  The episode of the orbital bone of all the eastern authors have used only Abay. A similar motif is in the "Iskander-name" Nizami: country darkness divine messenger gives Iskander Shah small stone and tells weigh it when they return to the light. Libra came into balance only when the other threw a pinch of dust bowl. Iskander understands that "The measure only ashes. The king was embarrassed as a clear example: Will the dust and what was called Iskander. The meaning is the same story in Nizami and Abai is - a reminder of the inevitability of death and the futility of conquest aspirations of Iskander, the condemnation of his greed. That Abai have used not miraculous stone, which outweighs the gems ,  orbital bone, spice plot". S.K. Satpayeva. Nizami poem called the most humanistic of work about Alexander, but the "Iskander" of Abai is not inferior to her in any literary or generally promise. In addition, the image of Iskander to Abai is inextricably linked with modernity - its children suffer from the same defects and errors.  Having absorbed the experience of having worked and ancient, eastern and western authors, Abay created perhaps one of the most accurate and objective image of Alexander the Great.

Share:
Similar articles
#LITERARY NEWS
‘English Rakugo Show’ took place in Nur-Sultan
1585
#LITERARY NEWS
Astana hosts an Eurasian Literary Forum under a title “The Power of a Word in a Modern World” these days
3449
#LITERARY NEWS
It has been 93 years since the Union of Writers of Qazaqstan was established.
8039