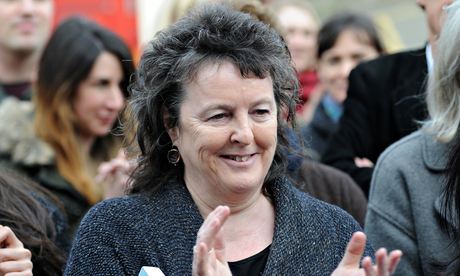 The poet laureate and leading authors have written to the justice secretary, Chris Grayling, asking for a meeting to discuss his decision to introduce a ban on sending books to prisoners.

Carol Ann Duffy and the novelists Julian Barnes, Ian McEwan and Mark Haddon want to meet Grayling after growing anger at the decision to stop people sending books and other items to prisoners.

Francis Crook, chief executive of the Howard League for Penal Reform, which has led the campaign along with English PEN, said: "If the Ministry of Justice hopes this issue will go away, we are afraid they have another think coming. The country's leading authors continue to question the wisdom of a policy on banning loved ones from sending in books and other essentials to prisoners. Whilst we continue to campaign and are considering possible legal action, the time has come to discuss an amicable solution. We hope ministers will take our offer seriously."
Tens of thousands of people have signed a petition and sent photographs of bookshelves to the MoJ's Twitter account using the hashtags #shelfie and #booksforprisoners.

On Monday, it was announced that Grayling could face legal action for acting "unlawfully and irrationally". Last week, Duffy led a poetry reading outside Pentonville prison in London in protest at the restrictions that included actors and writers Vanessa Redgrave, Samuel West and Kathy Lette.
Jo Glanville, director of English PEN, said the government had failed to give a satisfactory response to concern surrounding the plans. She said: "Through our work in prisons, we've seen at first hand the fundamental importance of access to literature.

"Some of the country's most eminent writers are now seeking an opportunity to discuss a way forward. I'm hopeful that ministers will be prepared to review a misguided policy."

Duffy, Barnes, McEwan and Haddon were among 80 writers and dramatists who urged the government to lift the restrictions in an open letter last week.

The MoJ said it would consider the request once it had received the letter.

Share:
Similar articles
#LITERARY NEWS
‘English Rakugo Show’ took place in Nur-Sultan
1564
#LITERARY NEWS
Astana hosts an Eurasian Literary Forum under a title “The Power of a Word in a Modern World” these days
3413
#LITERARY NEWS
It has been 93 years since the Union of Writers of Qazaqstan was established.
7909