National Portrait Gallery welcomes author nearly a century after she refused to sit for a painting destined for its walls.

Virginia Woolf despaired at the walls stuffed with paintings of men at the National Portrait Gallery, refusing to sit for a drawing that she assumed would be put in a drawer and never seen. But a century later the celebrated author is the subject of an exhibition that uses portraiture to celebrate her life and achievements. 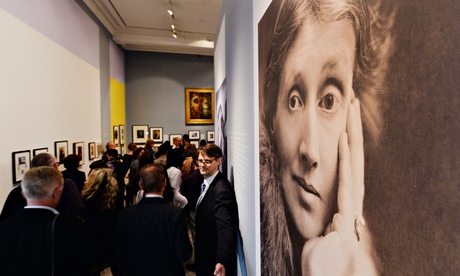 "Now we've got her," said the show's curator, Frances Spalding, explaining that Woolf took against the NPG when her father, a trustee, took her round it as a young woman. "It was entirely filled with men," he said.

The show, which opens on Thursday, includes more than 140 objects. As well as paintings of Woolf and her crowded circle of family and friends, there is rare archival material including two suicide letters and the walking stick found on a riverbank by her husband Leonard on the day she went missing in 1941.

Spalding said millions of words had been written about Woolf over the past 50 years, examining her in all manner of contexts. "All kinds of lenses have been placed over her work to show one thing or another."

Visitors would find, Spalding said, that there is no single Woolf and the many aspects of her personality and life are explored, including her feminism, her fascination with London and her acute awareness of modernity. Neither does the exhibition shy away from her vulnerability and the recurring mental health issues she suffered from the age of 13.

Two particularly poignant letters Woolf wrote shortly before her suicide are going on display for the first time in the UK.

"I feel that I have gone too far this time to come back again," Woolf writes to her sister Vanessa Bell. "I am certain now that I am going mad again. It is just as it was the first time. I am always hearing voices & I know I shant [sic] get over it now." 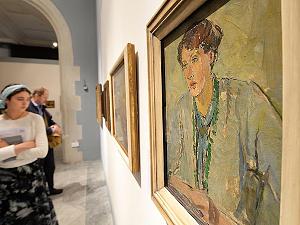 The letters are being loaned by the British Library, which had previously wanted to show them in its treasures gallery but decided against it – "wisely," said Spalding, because they need context.

In a nearby cabinet, Woolf's walking stick is being lent by the Berg Collection of the New York public library, the one found by her husband Leonard on the banks of the River Ouse. A month later her body was discovered by boys throwing stones at what they thought was a log.

Woolf, the writer of books including To The Lighthouse and The Waves, is well known for the weekly gatherings she hosted with her sister which led to the development of the Bloomsbury Group and its many members are represented in the show, from notable figures such as John Maynard Keynes, Roger Fry and Lytton Strachey to lesser known names such as Saxon Sydney Turner who, the exhibition reports, "was very often silent for long periods of time". Later, "he joined the civil service and disappeared into the Treasury".

The show is one of a number of literary exhibitions staged by the NPG over the years bringing together portraiture and biography. Above all, the Woolf exhibition celebrates what a remarkable writer she was. "Because of her imaginative reach and the power of her use of words," said Spalding.

"The moment you read her your mind expands, it alters, it reaches out for ideas and thoughts you haven't had before. If you doubt that, go back and read the first 12 pages of Mrs Dalloway and you'll see what I mean."

Share:
Similar articles
#LITERARY NEWS
‘English Rakugo Show’ took place in Nur-Sultan
1652
#LITERARY NEWS
Astana hosts an Eurasian Literary Forum under a title “The Power of a Word in a Modern World” these days
3588
#LITERARY NEWS
It has been 93 years since the Union of Writers of Qazaqstan was established.
8555