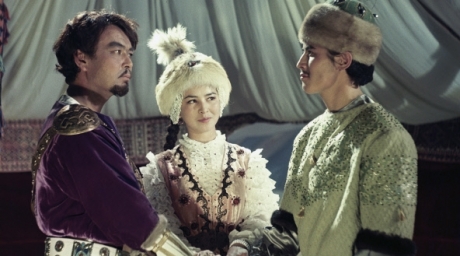 On November 13, 2015 the legendary movie "Kyz-Zhibek" is dated by its anniversary - in 1970 it was come out, and its opening night took place in the capital of Kazakhstan of that time Almaty, in heart of culture and art of Kazakhstan. 45 years later the film of Sultan Hodzhikov is still loved by the audience from all over the world, because even in the first years it was seen in more than 80 countries! Few movies can boast of such happy history: the scenario belongs to Gabit Musrepov, music by Nurgisa Tlendiyev, and wardrobe master is Gulfayrus Ismailova! They managed to reject aside personal ambitions and create together a masterpiece for a full due.

By the way, the film is sometimes called "a legend in a legend" because the performers of roles of Zhibek and Tolegen - Meruyert Utekesheva and Kuman Tastanbekov, transferred love from the screen to real life. Meruyert Utekesheva recalls: "To be honest, all my thoughts were directed on well performing of the role. In my head and heart were only the director, the role and the camera. I perfectly understood that very few people believed in my talent, that I can be Kyz-Zhibek. My desire to perform the role in the way Sultan Hodzhikov wanted did not leave a place to other thoughts".

At a stage of a choice of the actress for a leading role disagreements between Gabit Musrepov and Soltan Hodzhikov began - the first one was convinced that the role Zhibek requires only a professional actress, not younger than thirty years. The director, on the contrary, assured that the role of Zhibek should be performed by a young actress who was more corresponding to age of the heroine of the epos. Soltan Hodzhikov got the best of it, and in a sky of the Kazakh cinema a new star Meruyert Utekesheva was lighted up.

To confirm an actor for the role of Bekezhan also took some time. Asanali Ashimov who got this role finally, at first dissatisfied the director. But the actor nevertheless was invited to the open call, and here he impressed the director so much that even Gabit Musrepov was shocked and exclaimed: "Here he is Bekezhan!" The character of Bekezhan was difficult because he was not the banal villain, he was much more difficult character.

Unlike the epos "Kyz-Zhibek", in the end, after Bekezhan killed Tolegen, Zhibek ended her life. The literary source offers other version of events: after nine years from Tolegen's death Zhibek marries his younger brother Sansyzbay. Meruyert Utekesheva tells about it the following:" And how else to show a power of love? The ideal love is, as a rule, tragic. In the original version of the film a veil of Zhibek departures on a river flow and the Dzhungars pick it up with a spear and break off on a part as if the native land tears". Perhaps, not only the tragic ending allowed "Kyz-Zhibek" to become one of the greatest creations of cinema, the film, as they say, " for a full due".