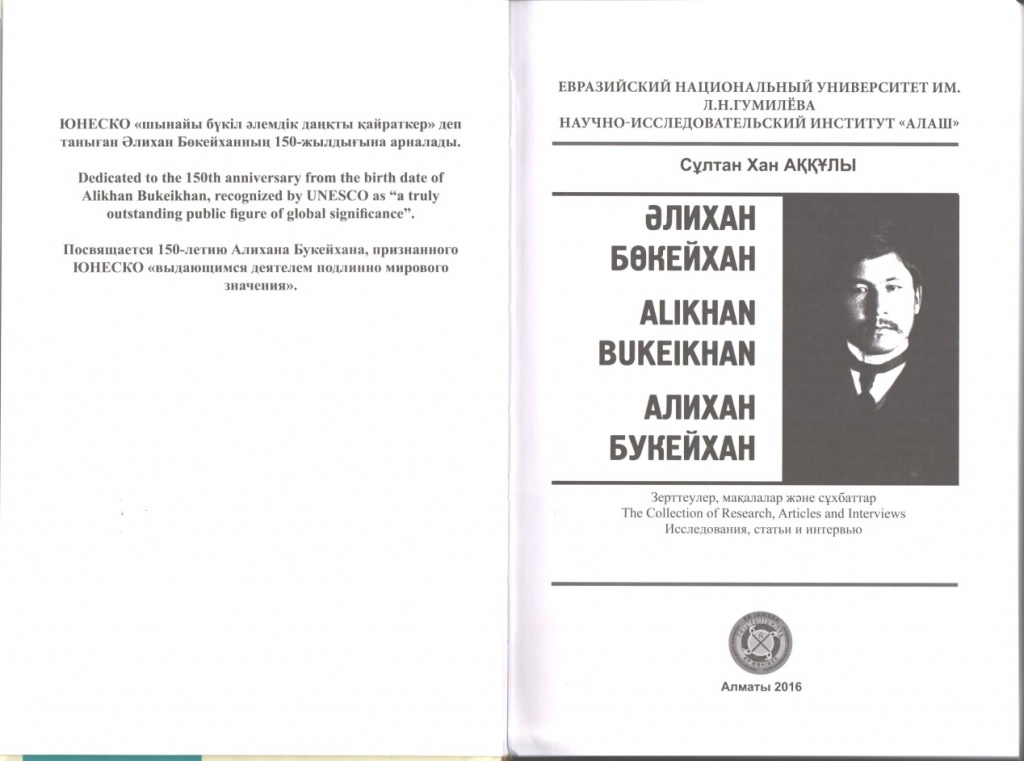 The latest 38th Session of UNESCO, held in Paris in November 2015 recognized Alikhan Nurmukhameduly Bukeikhan "as a truly outstanding public figure of global significance" and approved the proposal of the 196th Session of the Executive Board of UNESCO concerning conducting festive events dedicated to the 150th anniversary of his birth.

The Scientific Research Institute "Alash" of the L. N. Gumilyov Eurasian National University issued its first collection of research, journalistic articles, interviews and material from the round tables dedicated to the life, a truly versatile socio-political, public, scientific, journalistic range of activities of A. N. Bukeikhan and his rich heritage. The Collection "Әлихан Бөкейхан. Alikhan Bukeikhan. Алихан Букейхан" was published owing to the financial support of the International Public Fund "Yer Zhanybek" under the direction of Zhenis Turkiy. The Collection contains research, journalistic articles of Sultan Khan Akkuly as well as interviews and material from round tables published in the period between 2009 and 2016 in three different languages (Kazakh, Russian and English).

The Collection is the first of the series of books planned by the SRI "Alash" which are planned to be published during the current year as part of the celebration of the 150th anniversary from the birth of Alikhan Bukeikhan under the auspices of UNESCO. It is planned that in the nearest future the first two-volume monograph about the life and activities of the Kazakh national leader of the early 20th century will be published, which in the Kazakh language will be entitled "Tulgha tughyry"(Тұлға тұғыры), (volume I.) "Amanat" (Аманат), (volume II), and in the Russian language - "Tvorets istorii" (Творец истории) (volume I) and "Zaveshchanie" (Завещание) (volumen ІІ), the first complete collection of works of A. N. Bukeikhan in volumes 16 - 18, collection "Alashtyng Alikhany" (Алаштың Әлиханы), as well as many other books and collections.

Place: Hall of the Academic Senate.

Share:
Similar articles
#LITERARY NEWS
‘English Rakugo Show’ took place in Nur-Sultan
1683
#LITERARY NEWS
Astana hosts an Eurasian Literary Forum under a title “The Power of a Word in a Modern World” these days
3676
#LITERARY NEWS
It has been 93 years since the Union of Writers of Qazaqstan was established.
8838