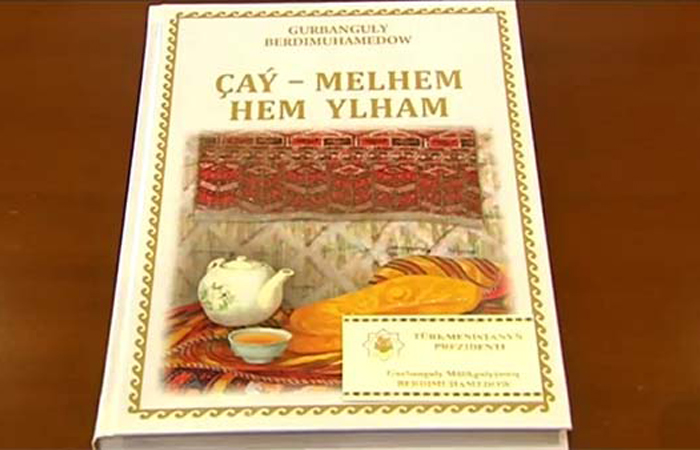 The president of Turkmenistan Gurbanguly Berdimuhamedow in honor of the holiday Nauryz (it is celebrated on March 21-22) wrote the book “Tea — Medicine and Inspiration”, reports the Turkmen television.

Nauryz-bairam, or day of the vernal equinox, symbolizes the termination of winter and arrival of spring, the beginning of a new agricultural cycle. In old times Iranian, Turkic and some other nations of Eurasia celebrated Nauryz as a holiday of New Year. Nauryz-bairam is one of the most ancient holidays in the history of mankind, historians define its age in more than three thousand years. At the time of the USSR Nauryz-bairam wasn't celebrated officially. However after disintegration of the Union it has found the status of a public holiday in all former republics of Central Asia, Kazakhstan and Azerbaijan.

The head of the Turkmen state has presented his new book at a joint meeting of the government and State Council of safety.

Congratulating participants of a meeting and the people of Turkmenistan on the International day Nauryz-bairam, Berdimuhamedow told that he come with the gift – wrote the book “Tea — Medicine and Inspiration”.

“Today I give this book to you and our dear nation” – said the president and gave book copies to Deputy Prime Ministers and heads of power ministries and departments.

It is the second book of the president which has already appeared this year and members of the Turkmen government have received at a meeting as a gift from the author's hands. At the end of January Berdimuhamedow has presented to members of the government the collection “Wisdom Source” made by him, in which the Turkmen proverbs and sayings which he collected for a row of years have entered.

The president of Turkmenistan is the author of a number of books. The greatest fame was gained due to the book about achaltekin horses “Akhaltekinets – our pride and glory”, the novel “Bird of Happiness”, and also the multivolume work “Herbs of Turkmenistan”. Books of the head of Turkmenistan are translated to a number of foreign languages.

Similar articles
#LITERARY NEWS
‘English Rakugo Show’ took place in Nur-Sultan
2553
#LITERARY NEWS
Astana hosts an Eurasian Literary Forum under a title “The Power of a Word in a Modern World” these days
8248
#LITERARY NEWS
It has been 93 years since the Union of Writers of Qazaqstan was established.
14068