On the 10th of July this year a book “Re-Start (Level Up +1)” written by Daniyar Sugralinov in LitRPG genre is started to be sold on international reading web sites. The book was published by the Russian publishing house "Eksmo" in autumn 2017 in Russian language and later on it was translated into English. 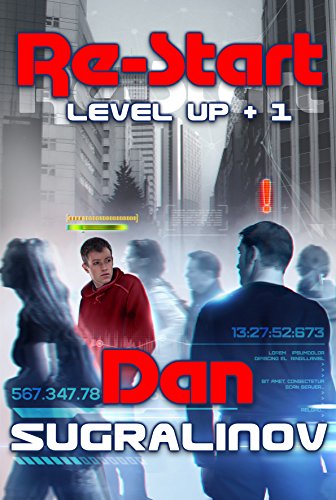 The main hero of the story is Philip Panfilov, he is 32 years old, lives in one of the post-Soviet countries, most likely, in one of the Russian cities. He is a freelancer, writes articles, texts for websites. He several times tried to find a permanent work, but he was fired in some workplaces and other places he left himself. He is married to a girl younger than him for four years. Since their marriage a lot time has passed and he does not develop, he spends all his time lying on the couch. He does not want to strive for anything.

A young couple lives in a rented apartment, everything is comfortable for the hero, but not for his wife. Al last she decided to leave him. On the day she left him, he receives a virtual interface of augmented reality, something like Google Glass, only without the glasses themselves and with much more detailed information. The hero begins to understand how the surrounding people treat him, understands the state of his health and so on. And these things encourage him for personal development. He becomes better, stronger, and at the end of the story he rescues the world.

Here is some feedback from the readers:

“Most LitRPG I've read has been full of selfish narsasitic punkish main characters. This book was a welcome relief in both setting and chacterisation. Buy it now!”.

“My new favorite series. This LitRPG takes me to places I love to go in the genre”.

“When I finally finished I realized my legs hurt, I was hungry and I needed the bathroom. These debuffs were mitigated by a 10% Happiness buff”.

“The book is amazing and exciting! I'm looking forward to reading the continuation of the story!!!”.

Such readers’ comments show that the book has a high potential. As it was mentioned by the writer during one of his interviews, at present moment negotiations to conclude a contract for the whole “Level up” trilogy with one the largest American company that specializes in audiobooks are being held. “It is a company that specializes in audiobooks because today the format of audiobooks is more popular than regular books” – says the author.

For the readers’ pleasure the translation of the second part is coming to an end and very soon anglophone readers will have an opportunity to read it. The author from his side finished writing the third part of the book. In addition to the above-mentioned Daniyar Sugralinov has already received proposals to make a film on the basis of the trilogy. Most of them are from Russian film makers.

In one of his interviews for a question, why he has chosen LitRPG genre Daniyar Sugralinov answered as follows:

“In the current form, the genre is very young, it must be about five or six years old. It came up from South Korea or China. The essence of the genre is that the action takes place in virtual reality or in the game. In any case, in any LitRPG there are a lot of figures, indicators, characteristics of the heroes. How did this genre start? With the fact that on YouTube, many streamers began to spread the passage of games, and it turned out that it is very popular today.

I remember myself as a child, in my youth - one of us was playing a game, and the rest sat and watched, experienced, prompted. This interaction effect touches a lot of strings in the soul - first, the excitement, whether the boss will be able to pass or not, and if it was possible, what loot from it falls out, and secondly, empathy to the hero. There is one life left, and Mario still has not saved the princess! You have to write about what you know, but my first computer appeared when I was 12 years old, I am an old gamer. I even programmed some simple games myself. And when this genre appeared, I read what was published abroad, then I read the Russian-speaking authors, like Dmitry Rus or Vasily Makhanenko and I realized that this genre is mine”.

According to the author’s words, the idea to write such a novel in such a genre appeared when he visited gym. ”When you start exercising and establish a fitness routine, the digital progress of your achievements is going on. Today you lift the 50 kg barbell over your head, tomorrow it will be 60 kg. You see obvious progress. So, the idea that if any of our achievements, actions, words were estimated in numbers, it would probably somehow change the life of each of us ... Just imagine that you see a time totalizer that shows how much time you have left before death, you would definitely live differently. So, the idea broke out, I started writing…”- said the writer.

Daniyar Sugralinov was born in Aktobe (a town located in western Qazaqstan, bordering with Russia) on December, 2 in 1978. At the age of 5 he was taught reading and since then he never gives it up. His family and his grandparents’ family had big libraries and they always gave him as a present different kind of books. His favorite book since his childhood is “Dunno on the Moon”. It is a fairytale novel by Nikolay Nosov from the series about the adventures of Dunno with elements of science fiction.

After secondary school he entered the Saint Petersburg Academy of Engineering and Economics in 1995. He studied there business building and by the time visited a lot of libraries and meetings with science- fiction writers.

In 2005, Daniyar Sugralinov wrote several chapters of the story “Bricks” and sent to the editor of one of the popular internet resources. The editor liked the story, and he began to publish it in parts.

As a result, the book was read by about 3 million people, and the young author Daniyar Sugralinov unexpectedly became “The Best Prose writer of 2005”.

In 2014 he released an updated version of inspirational novella "Bricks 2.0", it was published in paper version in Russia, and at the expense of the publishing house. At present, the novel is filmed on “Qazaqfilm”.