Home Literary process ESSAY A book «The Man-Deer and Other Stories», written by Oralkhan Bokeev is available for anglophone readers

A book «The Man-Deer and Other Stories», written by Oralkhan Bokeev is available for anglophone readers

A collection of stories «The Man-Deer and Other Stories», written by a renowned Qazaqstani writer, playwriter and journalist Oralkhan Bokeev is translated into English and published in London in January this year. 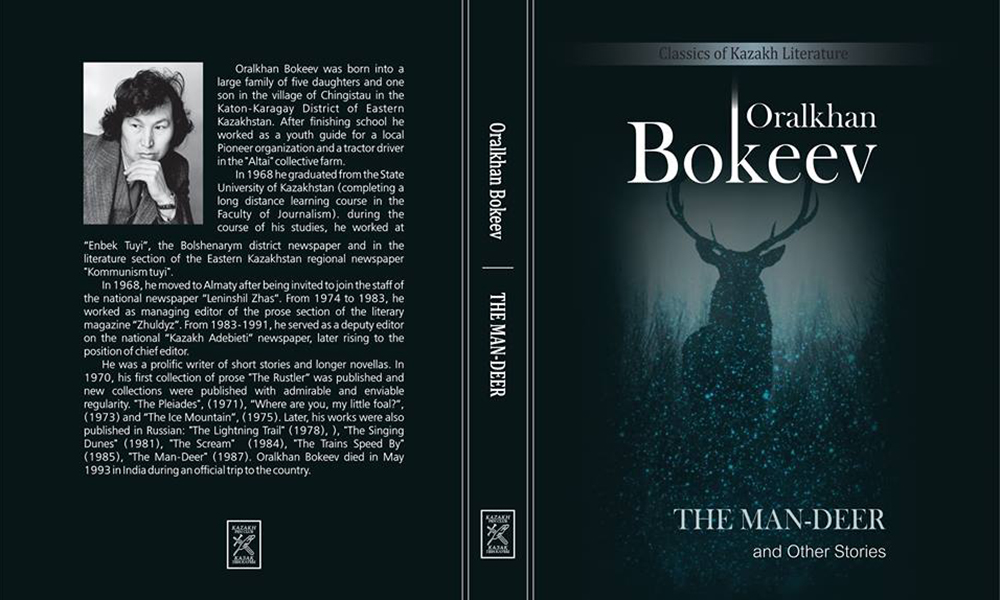 A book was translated and published in the framework of a project “We are Qazaq people”. The project was launched to enlighten people around the world with works of Qazaqstani writers, which allows, in turn, English-speaking readers to learn more about Qazaqstan, its culture and way of life of Qazaq people.

Stories for the collection «The Man-Deer and Other Stories» were translated by an experienced British translator Mr.Simon Hollingsworth.

Oralkhan Bokeev's book includes his most famous works such as: "The Man-Deer", "The Scream", "A Tale about Dinara's Mother", etc.

The book “The Man-Deer and Other Stories” gathered all his best works, it shows the most caracteristic features of the writer, which were peculiar to him in different years of his creative path. The collection of stories allows us to realise what a wonderful writer he was.

This book proves that even during the difficult years of “stagnation” it was possible not to give way to pressure, but to defend with all your forces and talent the true values. Oralkhan Bokeev always worried about the most important problem of our century: how to save the dignity and worth of the human-being from corruption.

The prose of Oralkhan Bokeev is easier to understand if one takes into account a certain touch of existentialism in it. He is to some extent an idealist-metaphysician, a bearer of the spirit, which opens access to inner spiritual reality. In human nature the author sees duality: the spiritual (inner) dimension and the physical (external) one. Each person carries within himself or herself a microcosm, reflecting and containing the entire real world. To espy it in yourself is not an easy task for a person. It depends on the purity and activity of the individual's consciousness.

The hero of Oralkhan Bokeev fights with himself to break through inside himself, to discover the treasures hidden in him or to find an answer to the eternal questions that tormented him. "Who am I? Why do I live? What is the meaning of my existence?». This explains the painful projections of souls of the heroes, their tragedies and mistakes, often leading to death.

As a rule, the plot of the stories of Oralkhan Bokeev's novels are simple. In most cases the plot of the story are the prose writer's thoughts, a change in the mood of the characters, their reflections about life and love, what is good or bad in thier life...

The heroes of the writer are usually very well-known to him characters. They are hunters, shepherds, machine operators, local people, living in auls („aul” means „village” in Qazaq language), located in mountains of Katon-Karagay district. In opinion of the author, these people are bearers of consciousness, which is not complicated by intellectual stratifications, in other words, they are "primordial" people, who especially painfully react to evil and injustice.

The story «Man-Deer» opens the book and gives it a name. There are few heroes in it: the jigit (means “a young fellow man” in translation from Qazaq language) Aktan, whom the people call the Man-Deer, his dumb old mother and several other inhabitants of the aul.

“The Man-Deer” is a hunter who has mutinied against the world, trying to find happiness in the virgin world of mountains, alone, as he was nicknamed the Man-Deer. People, having left the inhabited aul, moved to a new place of residence – a sovkhoz (a state-owned farm in the former Soviet Union), and Aktan, the main hero of the story, cannot dare to leave his home. He knew that he would not change in the depths of his soul, no matter how he was moved on the Earth: he knew that the sky above Altai, the feeling of flight and the cold mountain river would remain the main and irreplaceable for him.

Aktan seeks a higher freedom. And at the same time, he desperately wants to meet with an ally who does not betray the sacred land of the fathers.

He says to his beloved girl: “... I know that if I had read all the books from your library, I would have become much smarter. But along with this I would have become much more cunning and dirty. Who are called smart people? .. Are not those who are more cunning than others, ruthless and shameless? So, Aygul, let me be stupid and uncouth. Let me not know how to think or cry as in books. But I will live my own way, as I can, and I will never give up my freedom ...”.

Inspired by the authoritative tone of freedom, Aktan feels true joy only in the lap of nature. His devotion to nature and desire for independence run him. He feels himself as if he could become an integral part of the world of mountains.

Aktan’s fragile soul should solve a dilemma: to make himself the slave, it means to move to people, or to stay independent on nature. And perhaps he would have remained faithful to his nature, if his countryman did not commit a horrible atrocity. The guest who arrived at his house killed the only hunter's horse, carried away everything from his chest and broke both Aktan's skis.

Being furious the Man-Deer shouted: “No! It is impossible to live like this! Mum, tell me why when I run from all good, because I do not want anything bad, but this bad all the same overtakes me ... Well, all right! I will go to meet the Evil! I will go and catch up with this stray dog! Get ready, Mum, we are moving to the aul ... “.

An old woman, who had been silent for a long time, who is considered to be dumb sighed faintly and said:

At the end of the story we see that the collective machine of society, destroying in a human-being sincerity, warmth, honesty, intimate life, integrity of feelings is stronger than human -being.

There is a consistent pattern in Oralkhan Bokeev's works: every new novel is an independent and complete piece of art itself, but at the same time, to some extent, the novel continues the previous one. From the story to the story, the author returns to the stirring thoughts, developing them, “deepening”, and moves further to the key question of his creativity: what is good and what is bad, how to protect the human individuality?

The narrator in the works of Oralkhan Bokeev is a person who listens and collects the different voices of one soul. Therefore, it is typical for the writer’s works when the hero has a “a dual conscience”.

Analysis is impossible for him without dismembering. Being bifurcated "a Man" - Aktan and "a Deer" talk with each other.

Summarizing the above-mentioned, it is worth to mention that the novels of Oralkhan Bokeev are devoted to the moral problems of society, the relationships between people and the relationship of a human-being with himself. The author used nature as a key topic in writing. His feeling of individualism is actual by today.

Oralkhan Bokeev was born in a large rural family in a small village Chingistay in Katon-Karagay district in eastern Qazaqstan.

After school he worked at a school as a Youth guide for a local Pioneer organization, and later on as a tractor driver in sovkhoz “Altaiski”.

In 1968 he graduated from the Qazaq State University. He studied by correspondence on a Faculty of Journalism. While studying at the University Oralkhan Bokeev realized his dream to be a journalist by working with some regional newspapers in eastern Qazaqstan. After graduation the University he moved to Almaty and started to work for a republican newspaper for Youth “Leninshil zhas”.

In 1974 he worked for a literary magazine “Zhuldyz”.

In 1983 he moved to a newspaper “Qazaq adebieti” as a Deputy Editor-in-Chief.

The plays “My foal”, “Tecetires”, “Snow Girl” were performed on the stages of the theaters. The films “The Man-Deer”, “The Devil's Bridge” were produced and on the basis of a story “Ker bugy” a ballet-performance was staged.

He died in May 1993 in India during his trip to gather material for creative work.