An Aruana is the best breed of female single-humped camel. It is a symbol of maternal love in Qazaq literature. In 1968, the famous Qazaq writer Satimzhan Sanbayev, inspired by his memories of childhood, wrote a story dedicated to this animal. ‘The White Aruana’ by Satimzhan Sanbaev tells about the fate of a man in years and his sincere affection to a White Female Camel, which is sick at heart for its homeland.

The story begins with the fact that a small, snow-white camel was given as a present to a retired elderly man named Myrzagali by his relatives. The camel grew up and became a beautiful white camel - Aruana. This creature personified for the old man everything that was bright and pure that had gone from his own life. 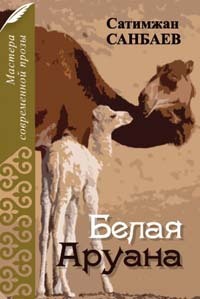 He was not an easy-going person. He kept mostly to himself. When he returned from the war, he learned that his wife had cheated on him with his neighbor Sholak, with whom they had competed the whole life. This news gnawed him.

In addition, he felt a deep inner discomfort from self- awareness that he did not live life the way he wanted at the very beginning: ‘... his head was full of heavy thoughts that his life was not going the way it should be. He remembered that there were moments when he tried to kill himself ...He tried, but he could not. And no one, except his wife, an old woman who lived with him this long and boring life, did not know about his pain ...’ Or: ‘He stood at the gate, ... feeling ... a terrible emptiness around’.

Myrzagali could not find something valuable for himself, and therefore he was not understood by anyone. The hero feels lonely and tired, his sense of frustration about his life increased day by day. Myrzagali tried to make an in-depth analysis of his life and find its essence. At last he realized that Aruana became the most precious thing for him. He saw in Aruana not a source of wealth and prestige, like his neighbors, including Sholak, who dreamed of the profit that a camel could bring him, but a kindred spirit.

Aruana, who yearned for its Homeland - the country of the White Mountains, located in Mangystau region, tried again and again to escape from ‘prison’, but Myrzagali overtook it and brought back.

When Myrzagali fell ill and went to the hospital, Aruana was cut the veins of its eyes so that it would become blind to make available interbreed mating with two-humped camel and no longer look at the White Mountains. Satimzhan Sanbayev wrote after its partial blinding: ‘... The camel was walking ... indifferently, as if it was in another world. Its eyes were filled with bloody tears’.

‘Bloody tears’ are the key elements of the story, bringing together the main characters. Aruana, irresistible to the ordinary course of life, great and tragic in its sadness, alone bowed its head under the weight of circumstances.

It bowed its head, but it did not resign to as predestination! The high purpose of the camel - love and loyalty to the Motherland was misunderstood by everyone, except Myrzagali.

The hero’s affection to Aruana, his hopes of finding something new, important and true, are also misunderstood by the people around him: ‘He knew that he had become attached to Aruana strongly and could not part with it. And as always, when he recalled the past and thought about his life, he felt himself weak and helpless’. Both protagonists are tragic in their solitude.

After it gave a birth to a baby-camel, Aruana became completely blind. Once in the summer, when the little camel grew up, a dry hot wind, bringing a long drought came to the Great Qazaq Steppe from ‘the country of the White Mountains’.

Aruana called its baby-camel and ran into headwinds. A great instinct led it forward, through hills, salt marshes, ravines. And behind it, Mirzagali and Sholak raced on horses. However, blind Aruana, not seeing a ravine ahead, fell into it, so its life was cut short.

The short novel is filled with the living sounds of the Steppe, human grief and happiness, longing and eternal striving for something higher than everyday life. Human pain is akin to the pain of living beings, that is why Myrzagali is so sensitive about his camel, taking its pain as his own: ‘... and the old man cried, buried his face into his horse’s mane and clasped his horse with his thin arms. He cried for a long time before relief came’. This simple philosophy of unity and goodness, the unity of human life with the wild nature, which the author calmly reveals to his reader, is understandable to the heroes of the short novel.

Nothing could stop Aruana in its desire to return home. Even motherhood. It was its essence. The only thing is important for Aruana, it is a call of the Motherland. And all its behavior, deeds, thoughts are governed by the moral instinct.

‘The White Aruana’ is not just a story about a camel, but it demonstrates how precious may be the Motherland for a creature or a person.

It is worth noting the time when the short novel was written. It refers to the period when there was a harsh suppression of all products of the free will in the USSR. Qazaq schools one by one were closed in Qazaqstan. Because of the ideological reasons the feature film ‘In That Place, Where the White Mountains are’, another title is ‘The White Aruana’, based on the script of Satimzhan Sanbaev, written on the basis of this short novel, was banned. The film was released after a long 15 years.