A novel 'The End of the Legend' of Abish Kekilbaev is a fiction, philosophical thoughts about life and death, truth and lie, love and power, good and evil. 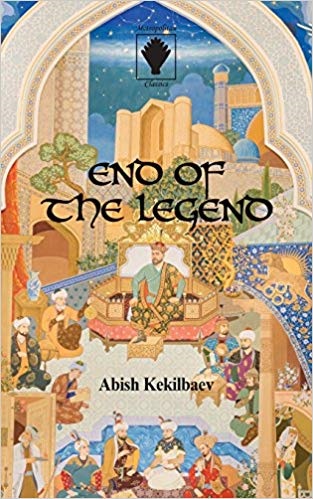 Through an icon of the Minaret, there is an opposition of light and shade, the upper world and lower world. The upper one is connected with an icon of heaven, beauty, with the world of dreams of heroes, the lower one with an icon of a city, the world of the hustle and bustle of daily life. A red apple with a wormhole, illustrating a fallacy power is also not a coincidence.

The groundwork of the novel 'The End of the Legend' is based on a plot, borrowed from the eastern parable. A story about the last months of the life of legendary Tamerlane Khan, nicknamed by the people 'irony' for his unbridled cruelty unfolds before the readers. The desire for unlimited power over everything is mentioned already on the first pages of the book, recreating a confrontation of the Lord (as he is called in the novel) and his troops, returning from the campaign, with the Great Desert.

The heroes of the novel, each in his or her own way, discover for themselves 'the vanities of the world, where the eternal struggle between good and evil, despair and hope' takes place. The voice of the narrator might be felt by the readers, expanding the speech of the Lord: 'He conquered many countries and peoples. However, in order not to think about conquered countries in future campaigns and not to spend energy on suppressing possible mutinies, he ordered to kill all the defeated soldiers in advance. Now you can not look back'.

The icon of the Lord in the novel is created through the prism of the various psychological states of the hero, but the dominant feeling is inner anxiety, turmoil seized the aging despot, who 'drowned millions of people in the blood'. In fact, we see a hero, who thinks over about his life and meaninglessness of the bustle of everyday life. However, the Lord 'did not allow himself to reconsider what had once been decided', believing in the exclusive right of a 'strong personality' to control everyone and everything.

The Lord's anxiety is aggravated by a number of circumstances: a shape of a magnificient blue tower that did not exist in his capital earlier; a red apple, twicely brought to him by a servant, from which a worm crawled out.

The minaret, 'proudly rushing skywrads', was built in his absence as an expression of faithful love for him of his young wife - Younger Khansha. As for the apple with a wormhole, it was sent to him upon the order of his elder wife - Great Khansha as a whiff of treason, betrayal.

On the other hand, the height of the Minaret plays up to Lord's vanity, because such a 'miracle' could not be found in any other place in the world. The tower for him is a symbol of his omnipotence over the vast, conquered world. The immensity of power devastated and disfigured both the life and the soul of the despot.

The construction of the Minaret, according to the idea of the Younger Khansha, was to demonstrate the power of her love and loyalty for the Lord. However, planned and successfully realized project turns into its paradoxical side - the 'illegal' love of a young woman and a tower builder. The more their feelings deepen to each other, the higher the Minaret rises from day to day.

Unlike the architect, the Lord sees in the Minaret something that is peculiar to himself: 'The tower is seen on the edge of the earth, and it graciously beckons, attracts everyone, but - when you are close to it – the Minaret becomes strict and untouchable, as the Lord himself ...'. The characters of the 'End of the Legend' do not have ready answers to questions posed to them by life, they seek and find them in the process of 'living'.

As a result, the young architect Zhappar was blinded, his tongue was amputated according to the Khan's command, and the young, innocent Khansha falls into disgrace. However, all these events did not bring the Lord calmness: on the contrary, in the last moments of his life he is convinced of his impotence before the eternal laws of Nature and the Creator.

A young blinded man without tongue is standing before his eyes, and he is not afraid of the Great Lord or his innumerable army. The power of true love and its eternal rebirth, imprinted in the tower's look, are stronger than the power of the omnipotent ruler.

An idea to 'build a temple', which is the basis of the plot of the novel, gives a special meaning to the narrative, sets value guidelines. The concept of the temple of the human soul, 'constructed' from ideal human aspirations for Truth and spirituality, is represented in all monuments of world culture, including the Bible and the Koran.

It is not by chance that Zhappar, in order not to 'suffocate in this stinking earthbound mud, desperately scrambles, climbs up a steep stone tower, there, towards the blue sky'. Unlimited power over people disfigures both the life and the soul of tyrants, devastating their soul and depriving sleep and rest. However, no tyrant can destroy the forces of good and light that eternally live in the soul of the people.

The soul of the people remains for ages documented in music, ancient legends, stone structures. Evil is inevitably doomed as long as there are gusts of the human soul 'to heaven'. The feature of true literature is that, when you pierce the soul of one people, it becomes the spokesman of the all-human soul. Abish Kekilbayev wrote exactly about this. He trusted history and reminded us of its wise lessons.

Abish Kekilbaev was born on December 6, 1939 in a settlement Ondy, at that time it was Guryev Region, today it is Mangistau Region.

He was the State Adviser to the President of Qazaqstan, Chairman of the Committee on International Affairs and Security of the Mazhilis of the Parliament, Deputy of the Senate, State Secretary of the Republic of Qazaqstan.

Abish was two years old when the Second World War started. His father died on the first day of the Battle of Stalingrad, but the family did not know about it and for a long time they believed that he was alive and would return.

'In my opinion, it is impossible to evaluate the phenomenon of Abish Kekilbaev, who is a great representative of Qazaq literature, outside the context of sociocultural changes that took place on the territory of Qazaqstan in the first half of the 20th century. The Bolsheviks in the 1930s first of all destroyed the nomadic lifestyle of Qazaq people, being confident that this way of life does not correspond to the high ideals of socialism.

They burned not only the ancient manuscripts, we can say that the zhyrau (storytellers), zhirshy (singer-storyteller), bii (judge elected by the people and respected by them) and others burned alive - in a word, a treasure-house of Qazaq folk memory had disappeared from the earth because of the Bolsheviks.

After this fatal blow and the "historic victory" of socialism that followed it, the nomadic culture for the next thirty years (until the 60s), lay half dead and convulsed. Qazaq writers, whose childhood fell for this period of time, were the last eyewitnesses of the dramatic collapse of nomadism, the unique way of life that existed in the Eurasian area from time immemorial. Abish Kekilbaev was in this list of Qazaq writers.

Nomads, who faded into oblivion, seems to be forever, suddenly revived, began to speak on the pages of Kekilbayev's prose, again enchanting the readers with the special fragrance of the free nomadic life that was taking place in the bosom of wild nature.

The release of one of the first collections of stories by Abish Kekilbaev - 'Steppe Ballads' - brings him wide popularity and puts him on a par with the classics of Qazaq literature. And historical novels 'The End of the Legend', 'The Pleiades' (they were released one by one) published later on just confirmed this honorable literary position'.

Abish Kekilbaev with his work made an invaluable contribution to the development of Qazaq literature. In addition to writing, Abish Kekilbayev was also engaged in translation. He translated from the Russian language into Qazaq the novels of Guy de Mopassan 'Pierre and Jean', 'Life', the story of Chingiz Aitmatov 'The Cranes Fly Early'. He took part in the translation of an epic novel 'War and Peace' of Leo Tolstoy, a number of works by Ivan Bunin.

Translated by Abish Kekilbayev plays such as 'King Lear', 'Romeo and Juliet' by William Shakespeare, 'Princess Turandot' by Carlo Gozzi, 'On the Night of the Lunar Eclipse' by Mustai Karim, 'Don Juan or the Love of Geometry' by Max Frisch, 'Reduction' by G. Ibsen, 'Today is a Holiday' by Antonio Buero Vallejo are included into the repertoire of the Qazaqstani theaters.

Abish Kekilbaev's book 'The End of the Legend' was published in English in 2016 by an American publishing house 'Metropolitan Classics' (New York). The translation was provided by professional translators Catherine Fitzpatrick, Marina Vlaadi Kartseva and Ihar Kozak.

A street in the name of Abish Kekilbaev appeared in the largest city of Qazaqstan – Almaty in August, 2018.

Similar articles
#ESSAY
Women in poetry of Qazaqstan
2107
#ESSAY
About a novel ‘The Fair love’ of a famous Qazaq writer Sabit Mukanov
1775
#ESSAY
A book «The Man-Deer and Other Stories», written by Oralkhan Bokeev is available for anglophone readers
2199