A novel ‘A House in the Steppe’ of a famous Qazaq writer Saken Zhunusov is the writer’s response to the Virgin Lands Campaign, realized in Qazaqstan and the collectivization of the 1930s. 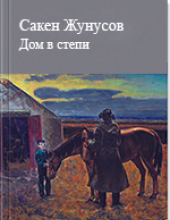 In a novel ‘A House in the Steppe’ we see a skepticism of the main hero to the external world and its rejection by him.

The writer constructed the story on the basis of real historical events took place in one of a tseliny sovkhoz (a State farm) of the Northern Qazaqstan. According to the author, virgin lands development unveils its specific problems. The scale of problems is so wide, they start from economical sphere and penetrate into the spiritual, moral nature of man.

‘Along with heroic labor I tried to show in it a collapse of a private property, its last symbol in a waste-land of Great Nomads – a lonely house’ – wrote the author.

The writer shows in an image of antihero Karasay, how the human personality collapses. A moneymaker and speculator cut off from the world in a bastel-house. All his corrupt desires were aimed at an iron chest, hidden in a cot.

For example, in a thirst for savings he lost his elder son – Zhalel, he bothered his younger son, whose name is Khalel, to go to school, making him speculate. He made a homeless child Dik (Tursun) his hand inviting him once to his house.

With her pretended interest Agashka Yapishkina fell beyond customs and traditions of local people and people who worked on virgin lands development. Appeared at random on tselina she ‘turned out to be a useful person’ for Karasay. Because of her Karasay’s wife Zhamish left him after 30 years of ‘a voluntary solitude in this deserted house’.

A way of life of another heroine of the novel Raikhan Sultanova counters view of Karasay and Agashka. She is a unique woman of the Great Steppe, whose rough life made her strong and brave. She is a symbol of strength of spirit.

The novel is based on ideas of tolerance and humanity. For example, after the death of Raikhan’s father a care about the girl takes on his shoulders Kurgerey (Grigory), relations between Khalel and Tamara are unselfish, unity of opinion characterizes Morgun and Raikhan.

Saken Zhunusov was born in a large family in a village under a name Kyzyltu, situated in Kokshetau region in 1934.

He graduated from the Philological Faculty of Qazaq State University in 1955 and worked as a teacher at a secondary school of his native village. Having completed postgraduate studies, he worked as a senior teacher in higher educational institutions of Almaty and Qostanay.

He acted as a literary employee at the magazine ‘Pioneer’, an Editor-in-Chief of the newspaper ‘Qazaq adebieti’, a Head of the Literary Department of the Qazaq Academic Drama Theater named after Mukhtar Auezov, a Director of the Qazaqstani branch of the Literary Fund of the USSR, a Secretary of the Writers' Union of Qazaqstan.

He completed courses of Maxim Gorky Literature Institute in Moscow. For a long time Saken Zhunusov worked as an anchorman of the programs ‘Kesh zharyқ’ (‘Good evening’) and ‘Cinema. Time. Contemporary.’.

Saken Zhunusov in a modern Qazaq literuature is one of the most outstanding writer among writers of older generation. For half a century of his creative activity, he enriched Qazaq literature with four novels, dozens of plays and a lot of stories. He is an author of more than a hundred studies and critical articles on the problems of literature and theater.

Saken Zhunusov was engaged in journalism. His articles amaze with their truly intellectual, patriotic ideas and thoughts. His style of writing impresses the reader with original manner devoid of stereotypes and ‘explosiveness’ in his texts. He possessed such qualities as courage and uncompromising.

Concerning a role of history in his works the writer noted: ‘A person who has no memory, no history, no spiritual biography, is doomed to spiritual poverty and is not able to succeed in modern environments.’

Saken Zhunusov's works are interesting not only because they reflected the problems of the life of the nomadic people, he dreamed of spiritual revival of the individuality, which, in his opinion, is possible only through self-knowledge and upbringing of the sense of responsibility of each person for the future of the nation and country on the whole.

The motto of the writer's life and creative activity was the truth. He was deeply convinced that only the truth and universal values can unite people and lead to a new path of development. As a writer Saken Zhunusov enriched literature with new themes, ideas, conflicts, plots and images.

Saken Zhunusov's drama is widely known in the country. His plays ‘A Tragedy of Azhar’, ‘Wounded Flowers’, ‘A Crossword’, ‘Prisoners’, ‘Leaders and Their Shadows’, ‘Spilled Blood’ and others have been staged for decades on the stages of the theaters of Qazaqstan. He is the author of about twenty plays.

He achieved significant success in a literary translation. In particular, he translated into Qazaq language the works of Leo Tolstoy, Oles Honchar, Stefan Zweig, and also: ‘Fiesco’s conspiracy at Genoa’ by the German classic Friedrich Schiller, ‘The Old Man and Death’ by Tatar playwright Tufan Minullin, ‘The End of the World 2000’ by the Russian author Igor Vovnyanko.