About Aigul Kemelbayeva's novel 'The Tower'

The interaction of Man and Nature is one of the key problems of our time. Writers throughout the world act not only as fighters for the preservation of Nature, but also try to foresee the problems of their mutual relations in the future. The crisis of spiritual life of people, the cult of consumerism is reflected in a novel of a well-known Qazaq writer Aigul Kemelbayeva 'The Tower' ('Munara', 2002). 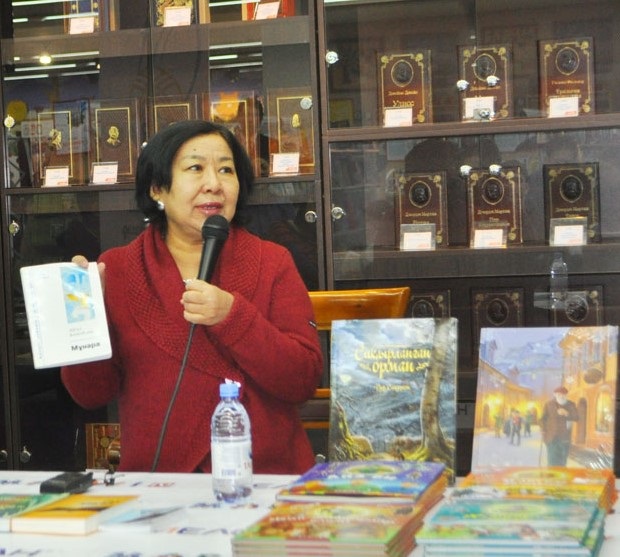 The novel 'The Tower' consists of two parts: the consumer civilization described in the first part ('The Nanny'), is opposed to the natural world in the second ('The Last Tiger').

In the second part of the novel 'The Last Tiger' the author immerses readers in the bosom of nature. The writer seemed to have foreseen the mysterious basis of life of Nature and Human-being.

The author uses factual material and prefers to name her heroes with true names of her relatives. It gives the narrative more sincerity and allows the writer to open her own inner world. The author tells about the tragic fate of her relatives who became victims of the Soviet totalitarian system. A paternal grandfather, exiled to Magadan (Siberia), did not survive, leaving after himself a young wife with a two-year-old son. They also failed to stand up against a heavy fate and died.

In her memory there was only an image of the maternal grandfather, who was a hunter. Thanks to the fascinating and interesting stories of her mother she could make up a picture of a hunter. While describing the images of animals and a man, the author used artistic parallelism in the novel. The main idea of the second part of the book is focused on the main hero, a tiger. According to the author, the tiger has no direct relation to the hunter Abduhamit, nicknamed Tarbak, but he is a kind of spiritual symbol of the writer.

The writer involves readers in a deeper understanding of the meaning of the title of the second part. As it is known, a tiger is the most formidable Asian predator. Many legends are associated with this animal. The tiger symbolizes fearlessness and strength. Eastern philosophy assigns the tiger the role of a defender against evil spirits, diseases. The tiger never attacks in vain. From ancient times the tiger in the East was considered a magical, supernatural being. There was even a cult of the tiger. The Tiger was revered as a God - a Landlord of mountains and caves, as a mediator between Heaven and Earth. In literature, he advocates justice, wisdom, and sometimes - passionate love. The tiger likes to see the beauty of its possessions. Life in a tribe is not for it, the tiger prefers solitude. The enemy of the tiger is a boar.

A boar is an animal that symbolizes cruelty. It acts as a personification of a sin, lust and gluttony. If in the East the tiger is considered a sacred animal, then to taste the meat of a wild boar is a sin. As it is shown, the figurative-associative system of the book is outlined by an ethnic worldview of the author.

Nature in the novel is unique. Interest, respect and love for native places, a detailed study of the habits of animals and birds turn the second part of the novel into an encyclopedia of life of fauna.

Tarbak, a hunter distinguishes his spiritual generosity. It is a feature of his stem family. Tarbak likes very much to spend time with his family. As he has an opportunity he invites all relatives to visit him and feed them. The hunter took the appearance of the tiger in his native places as good news, because the tiger became a victim of 'thoughtless consumerism and cowardly cruelty'. He is deeply convinced that the destiny of Mankind is closely connected with the existence of Nature.

The second part of the novel resembles a journey to the bosom of Nature with an aim to find your own identity, lost under the pernicious influence of 'consumer civilization' or so-called 'entertainment society'. Aigul Kemelbayeva closely connects this spiritual journey with the nature of the Region, characterizes through it.

Nature in the 'Last Tiger' is a direct object. The natural life of the animal world (tigers, roes, deer, wild boars, etc.) is contrasted with the modern consumer civilization described in the first part of the novel. Aigul Kemelbayeva marks the contours of reality between artificial and natural worlds, humane and mindlessly consumer worlds. This is a kind of call to true being - to the original wholeness of one's own nature, to the primordial nature of the natural environment. The author contrasts cruel, soulless attitude towards animals with traditions and spiritual values of Qazaq people.

The writer tries to find out a key to a great mystery of human nature. The writer's heart is open to know more about herself. A reader may read thoughts of the author about a fragility of life, a helplessness of Nature, giving joy to all that exists. In the second part of the novel, the writer intentionally 'leaves' the greedy, soulless world of people into the world of Nature.

Despite the fact that there is no clear collision and comparison between Man and Nature in the novel, the author's idea about a cruelty, destructiveness of the civilized world is clearly outlined. The title of the second part 'The Last Tiger' warns of the irrevocability and disappearance of harmony in the world due to an indifferent attitude to nature, which is a cradle of life.

Aigul Kemelbayeva, contrasting the living nature of material civilization, devotes to them two contrasting parts under the titles 'The Nanny' and 'The Last Tiger'. Deepening into the essence of a man-hunter, the author makes it clear that all the most essential, spiritual is inherent in nature itself. The writer states that it depends on the person himself which way he will choose. Constant peering into the hidden depths of her own soul, the reflections of the heroine Aizhan do not let her descend to disrespect herself, allowing her to remain a human-being in the highest sense.

The novel 'The Tower' can be called a 'spiritual autobiography' of the writer, in which her life principles were reflected artistically. It raises eternal themes: Man, Nature, Art, Literature, Philosophy, History and Modernity.

The author highlights the importance of belief in the true value of the strength of the spirit and the inner will of a man.

Aigul Kemelbayeva is a writer, literary critic, screenwriter, translator and Head of the Literary Department of the K.Kuanyshbayev Qazaq State Academic Drama Theater.

Aigul Kemelbayeva wrote her first novel 'A Journey to the Seventh Continent' at the age of 15. The work was awarded the Second Prize of the Republican Closed Competition of Literature for Children.

In her interview Aigul Kemelbayeva says that she writes mostly in her native Qazaq language. She began to study Russian language before going to study in Moscow. She is a graduate of the Moscow Maxim Gorky Literary Institute. She writes prose in Qazaq, then translates it into Russian. She writes essays and articles in Russian.

Aigul Kemelbayeva is a bright representative of a modern Qazaq literature, and her work 'The Tower' is one of the significant literary achievements of last few years.