About the creative path of Herold Belger

In March 2017 a book of the famous Qazaq prose writer, publicist and translator, Herold Belger under a title „Seleted Works” was published in English. The book was published in the framework of the project "We are Qazaq people", carried out by the Qazaq PEN-club. This project allows to bring attention of the world community to the best works of Qazaqstan writers, by assisting them through making translations into English and publishing their works in the UK and the USA. 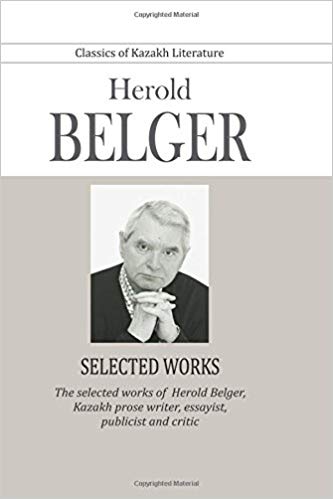 Creative path of Herold Belger was formed in interaction of three cultures, three languages, which is a bright example of multicultural and communicative cooperation, tolerance and true patriotism.

Herold Belger was born in the family of the Volga Germans on October 28, 1934 in Engels town (Russia). In 1941 according to Stalin's decree, as an ethnic German, among all Germans of the USSR, he was deported to Qazaqstan, to the Qazaq "aul" (means „village” in Qazaq language) near the present aul named after Yskak Ybyrayev (The North- Qazaqstan region) on the Yesil River, where the young Belger perfectly mastered the Qazaq language.

After graduation from the University he worked as a teacher of Russian language at the Baikadam Secondary School from 1958 to 1960. His lessons have always been interesting and exciting. The pupils attended his lessons with pleasure. After school he worked for 2 years in a literary magazine "Zhuldyz". Over time Herold Belger began to write his own works, the first book was called "At the edge of the aul". Anxiety about the fate of the Qazaq aul, where he grew up and graduated from secondary school, is a distinctive feature of his epic works.

From the very beginning of Herold's creative activity, he defined as a key topic: internationalism, brotherly friendship of people. Herold Belger is the author of 45 books and more than 2000 publications, he wrote 2000 critiques. He translated from Qazaq into Russian language tens of volumes of Qazaq prose. There were written 3 dissertations, 2 monographs, about 400 articles, documentary films were made about him. Among his most famous works are: "The House of the Wanderer", The Pine House on the Edge of the Aul", "The Seagulls over the Steppe", "Behind the Six Passes", „The Brother among the Brothers”, "The Stone Brod", "Tomorrow Will Be the Sun".

The writer worked up to the collar, releasing seven - eight books a year. At the same time he moved for more than 27 years on crutches, and for the last 20 years he suffered from attacks of high blood pressure, kidney disease, radiculitis, the consequences of several heart attacks and strokes.

Herold Belger has always been an active public figure, a member of all sorts of commissions, councils and committees. He was a laureate of many public literary and journalistic awards.

Most of his countrymen respect Herold Belger because „he was internally free. This freedom was the most valuable resource in him. His internal freedom was his dignity. He spoke and wrote what was on his mind, he lived honestly and followed his heart and soul”.

Neither before nor after Herold Belger, no one has translated so many classics of Qazaq literature.

- «People become engaged in literature in different ways, - said Herold Belger in one of his interviews— Some of them appear as a meteor - swiftly and blindingly bright, others start slow and continuosly step on the stairs leading upwards. I am from the second one.

I went through a rough patch of the «beginning writer». I was very poor at that time. I was married and I had to earn for family needs. Therefore I did interlinear translation. The texts that I translated were sent to Moscow to an eminent translator, who corrected them in accordance with imaginative writing rules and published them under his or her own name. Some of these writers worked honestly, but most of them tricked. Such cases also took place.

Abdi-Zhamil Nurpeisov, a writer, laureate of the State Prize of the USSR:

- «I've been looking for someone who will translate «Blood and sweat» into Russian language for a very long time. I was advised to make a proposal to Herold Belger. I gave him the most difficult part of the trilogy. Already on the next day he brought me a translation. I was stunned. He translated my thoughts exactly to the point. Herold surpassed all my expectations. Herold Belger was fluent in Qazaq, Russian and German. Knowledge of languages is not only an opportunity for communication, but much more. And his work is a brilliant proof to my words».

The book «Blood and Sweat» written by Abdi-Zhamil Nurpeisov thanks to Herold Belger's translation was translated into English language and even got into a shortlist of the Nobel Prize.

Having an opportunity to end his days on the territory of his historical homeland - in Germany, Herold Belger had chosen Qazaqstan as his true Homeland and his last resting-place.

He accepted and adopted without any prejudice the history of the Qazaq people, their language, literature, customs and traditions, art and moral features from his childhood. He naturally absorbed the entire cosmos of Qazaq culture. He studied it, he was attracted by spiritual life of Qazaq people. He did not become «a friend among foes» or «a foe among his own men». That's why he wrote with good reason for that: "The history of the nomads is an intricate, breathtaking labyrinth in which crowds of historians, especially foreigners often and hopelessly wander."

The topic related to the Motherland is of great importance for Belger, it's no accident that this topic dominates in his works - both in prose and in essays. His heroes, deported and exiled Germans, people of crippled fate, adults and younger ones, constantly and persistently argue on the topic: what is the Motherland, where is it, do we have a homeland? Or are the Russian Germans eternal rootless wanderers, outcasts, homeless on this earth? It is known that the road is free when there is none. A free man does not pay attention to Freedom. That's especially true when you are deprived of the Motherland. And the fate of the Russian Germans, to which the writer belongs, was tragic, so for them answers to these questions were very crucial.

Since Herold Belger was seven years old, he lived in Qazaqstan and considered himself almost as a native born Qazaqstani fellow. All his life, creativity, thoughts, deeds, hopes were connected with Qazaqstan. "I never betrayed my country - Qazaqstan. I hope, it will never happen” - used to say the writer. „The Yesil River, the Great Steppe, a lot of open spaces, storms and rains of the gracious North Qazaqstan I accepted as my own, as something primordial. They become a part of me. And I began to feel like a son of this country at very early ages. And there are a lot of people in Qazaqstan, who found themselves in this country not on goodwill. But not everyone accepted this land as their native land, for some of them it remained as a place of exile. And in this neither the land, nor the native people, nor the deportees themselves are to blame".

The history and fate of the Russian Germans Herold Belger describes in many of his works. His emotional pain the writer clearly shows in the novel «House of a Wanderer».

"I had two pillars: great Russian literature and my Qazaq environment, my Qazaq friends. I needed the third pillar, a national backbone, an ethnic mentality to recover my poise." - wrote in his diary Herold Belger in the mid-1960s.

Herold Belger has always been looking for the answer to the question since his childhood, for what reason do I live? What is the true meaning of my existence, of my works? And today, as a writer, the meaning of life would be defined by him in Dostoevsky's way: to awaken a person, to make a person with an awoken soul, to show him or her that he or she is not an animal. Real, non-commercial literature should awaken in a person spiritual values, it is obliged to show that we are spiritual beings living within a material world.

After his death in 2017, a book under a title «Herold Belger: Such a Fate befell Him» was published. The author of the book, a historian Vladimir Auman gave a picture of Herold Belger's life and his creative path against the background of the terrible fate of the Russian Germans. The book was published with the financial support of the Federal Ministry of the Internal Affairs of Germany.

He is a holder of seven medals, including the Catherine's medal of public organizations of the Russian Germans.