The poem of Shakarim Kudaiberdyuly ‘Yenlik - Kebek’ is a great Qazaq poem, full of social commentary. The problems raised in the poem are traditional for the Qazaq people of that period: the tribal feuds, the love of the main characters and death.

In the Qazaq tribe ‘Tobykty’ a boy was born, his given name was the name, Kebek. The author of the poem describes him as a favorite child of the tribe. When he was fifteen years old, he was different from all the other people by his physical strength, a thirst for life and youthful enthusiasm. He was ‘a brunette, of medium height, broad-shouldered, good-natured, friendly in manner’.

Once upon a time to have his fortune read Kebek decided to go to the so-called fortune-teller (in the Qazaq language ‘abyz’) Nysan. He lived in the mountains of Shyngystau.

Kebek, having quietly approached the miserable abyz Nysan’s yurt, standing alone in the rocks of Shyngystau, stopped as if enchanted: sad, soul-touching sounds came from the yurt.

In describing the sounds of music, coming from a kobyz (a Qazaq traditional instrument), its influence on a human-being, such epithets as ‘magic music’, ‘enchanting sounds’, ‘caressing sounds overwhelmed the soul with some kind of unexplored feeling that a person wanted to listen to this magical music more and more, without stopping, because they told a lot to the heart and the soul’ were used.

Abyz Nysan said that Kebek was doomed to speedy death. He would die in the prime of life, humbled and humiliated by his tribe and enemies because of a beautiful girl.

Shortly thereafter to pass the time Kebek with a golden eagle went hunting for foxes. For a long time he wandered through the hills and valleys, it went dark and it was too late to get home. There wasn't a living soul to be found for miles around. Suddenly he saw in one of the Shyngystau gorges, near the mountain Khan a curling smoke. He came closer and found out a small ‘aul’ (in the Qazaq language means ‘a village’). He spent there the night, but the most important thing for him was that he had fallen in love with a daughter of the host of the house where he spent that night. Her name was Yenlik. They developed feelings for each other. 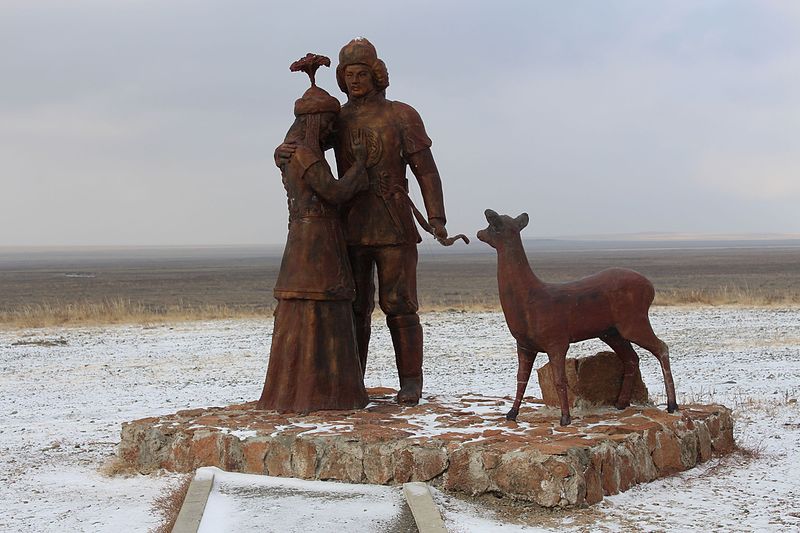 But Yenlik was plighted by her parents to a rich and elderly man from ‘Kerey’ tribe. More than half of the bride price was paid for her. She had to decide to kill love in her heart or in violation of a centuries-long tradition to stay with her lover, condemning herself to revenge and bitter hardships.

Offending against custom young lovers one dark night ran away together. Later on she gave birth to a son. But their happiness did not last long. The tribe ‘Matay’ elders, to which belonged Yenlik, regarded a runaway of the girl as an affront to the dignity of the tribe. They began to avenge an insult to the Kebek’s tribe ‘Tobykty’.

In this way after Yenlik’s runaway two fighting between themselves the tribes ‘Matay’ and ‘Tobykty’ appeared on the scene. Threats and counterthreats, cattle theft took place between them. Some of conflicts even ended in murder. Finally, the Parties appealed for a mediation of the ‘biys’ (‘judges’ in a traditional Qazaq society of that time). The cruel biy Kengirbai was for the punishment of Kebek and Yenlik, because they dared to violate the ruling in the Qazaq Steppe Law.

And the prediction of Abyz Nysan came true, Kebek and Yenlik were sentenced to death. Before the execution Yenlik asked for a final speech, devoted to both of tribes. She did not ask for mercy, did not pray to leave them alive, with dignity she asked to give the opportunity to say goodbye to her love, her husband Kebek, to bury them together in one grave and to spare their innocent four-month-old son.

Her final speech, expressing the human right to life and love, flew in the face of tradition and the bearers of cruel and inhuman customs. Kebek and Yenlik with their hands and legs tied were tied to the horse's tail, and after a few minutes, their severely mutilated bodies were thrown into a hole prepared earlier. No one picked up their little son.

Shakarim Kudaiberdyuly in the poem ‘Yenlik – Kebek’ angrily stigmatizes the traditions and customs that cultivate cruelty in people, endow them with destructive power.

It should be noted that the plot of the poem is based on real events that occurred according to Shakarim Kudaiberdiuly in the Qazaq steppes in 1780.

Once, the ancestor of the great Qazaq writer Abai and, accordingly, Shakarim Kudaiberdiuly (they were relatives) named Kengirbai, being a prominent representative of the society and a rich man of his time, examining a lawsuit about a runaway bride, sentenced two young people in love who did not want to part with each other to death for the sake of the customs that prevailed in society. 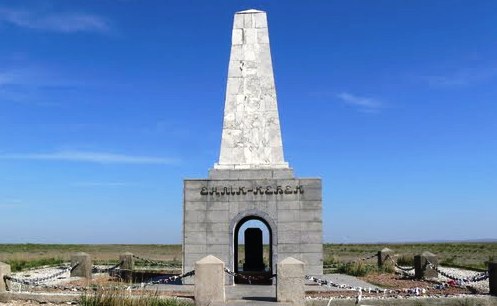 Qazaq people, in memory of Yenlik and Kebek at the burial site of the heroes of the poem, built a monument as a symbol of love. There are a lot of songs and legends about Yenlik and Kebek in Qazaq literature and folklore.