And the people will howl like wolf in the time of the wolves;

and they will twirl their tails like foxes, if time of foxes comes.

Works of Abdi-Jamil Nurpeisov have a special place in the history of Qazaq and world culture. His works are very popular among readers and researchers. His book-trilogy "Blood and Sweat" is a folk epic, an encyclopedia of the life of the Qazaq people.

For this work Abdi-Jamil Nurpeisov was awarded the State Prize of the USSR. The book was translated into over 50 languages, on the basis of the book a script was written and the feature film under the same title was produced. Moreover, a monument honoring the book's heroes was installed in Aktobe, a hometown of the writer and one of the main places, where actions in the trilogy take place. It is worthy of note that it is the first sculpture in Qazaqstan devoted to literary characters.

In May 2013, the English version of the book was published. Its presentation took place in the USA within the framework of the largest book fair in North America "BookExpo-2013". The translation was made by Catherine Fitzpatrick and released by the American publishing house "Liberty Publishing House". 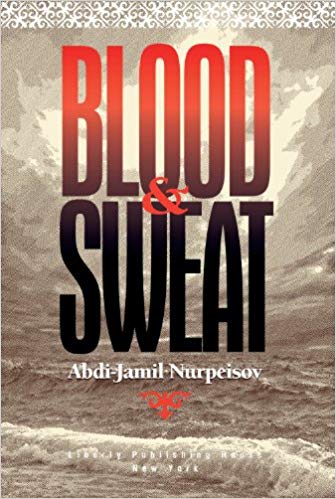 Abdi-Jamil Nurpeisov says that, the reason for writing this work was a great human grief, caused by wartime losses and casualities. He saw widowed wives, orphaned children, mothers who lost their sons and daughters, devastation and misery. The writer's family also suffered: Abdi-Jamil's father and his three brothers were killed. These images have found thier reflection in the historical-revolutionary trilogy.

The book consists of three volumes written at different periods of author's life ("Twilight" in 1966, "Ordeal" in 1968, "Fall" in 1970) and represents a picture of an era. Its language is very colourful and sounds lively.

The work does not lose its relevance today, the pride of place is given to the question: "How much has the society changed for the better, if all qualities that made it 100 (or even more) years ago, remained the same?".

Being on the periphery of the key political events of the beginning of the 20th century, the Great Steppe nevertheless became the arena of the struggle of "aftershocks" that have come here from Europe. The novel clearly traces the line of the unpreparedness of the canned medieval world to resist forces flowing down like an avalanche from the world outside. Eternal disagreements about livestock, power and way of life in the end seem to the protagonists a kind of dream that dissappears, facing global catastrophic realities.

The action of the trilogy "Blood and Sweat" takes place in a Qazaq "aul" (means “village” in Qazaq language), during the First World War of 1914-18 and the Civil War of 1918-1920. Everything here, from the smell of wormwood to the speech of the characters, is filled with the local spirit, here you can see or imagine way of life and traditions of the Qazaq people.

Abdi-Jamil Nurpeisov, being a native of a small fishing village near the Aral Sea, as no one else has shown the harsh life of poor fishermen in his work, who every day, going to sea, suffered not only from the "cruelty" of the Nature, but also of the local aristocracy-bais. But, despite all the adversity suffered by fishermen, the writer shows small human joys that gave them strength for survival. The daily struggle, and, particularly, the inner struggle, of some of the heroes of the novel (Yelaman, Kalen, Munke, Rai) broke out and grew into something that led to a revolution: at first these were outbursts of anger and excitement and at the end turned into an uprising.

"Blood and sweat" is a gallery of psychological images, different in fate and character. Yelaman is a straight-out, open and trustful fellow with a note of carelessness. Tanirbergen personifies prudence, secrecy and self-control. Kenzekey is a symbol of patience, as it required the Law of the Great Steppes. Akbalah shows a pride and inflexibile woman.

The trilogy convincingly demonstrates the terrible tragedy of people without God in their soul, clearly represents multilayeredness of the people's consciousness, its social diversity and contradictions.

In the same conditions, the characters of Yelaman and his relative Dos are developed. But, if life taught Yelaman to be persistent, tempered in him the spirit of protest against injustice, so Dos drew other moral: in order to stay alive and live you must be careful, canny, stay away from everyone who does not agree with the injustice.

The heroes of "Blood and Sweat" believed that the world they had suffered would once belong to them. Their grandsons and great-grandsons feel how this world freezes and falls to pieces. It is pointless to ask who will win in this doomsday: foxes or wolves? - the universe rolls back from the seventh day to the first, and the only thing that can be ascertained in this chaos: still there is a Day and still there is a Night. And what kind of twilight is it: before sunrise or before sunset, then God knows, if, of course, He does exist".

As it is evident from the titles of the novels "Twilight", "Ordeal", "Fall", which are the parts of the trilogy "Blood and sweat", there is little sunny mood in them. And if it does, the characters get into the next hell. But a tune of light and hope sounds persistently in the tragedy, dispelling the darkness.

In 1993, in an interview to „Literaturnaya Gazeta" (“Literary newspaper”), to the question "Would you like to edit your trilogy, to rewrite something in it?" Abdi-Jamil Nurpeisov replied:

"I looked through my novel "Blood and sweat". What can I hide, I had certain internal fears and doubts. And what a great relief I felt when I realized that I had not made a mistake against my conscience and belief. However, I knew this before. After I finished the novel, real troubles began for me: nobody wanted to publish it for two years. On the one hand, criticism, on the other - the watchful eye of censorship saw in it a distortion of reality, a misrepresentation of historical facts and a few more serious imperfections that did not comply with ideology of the Ruling power of that time. They told me that the main hero did not become a true revolutionary. In thier opinion, he was laggard, hesitant, always doubted everything. Instead of going with the naked saber to struggle for a brighter future, he still thinks, tormented, rushes between the city and the aul as a rootless wanderer, finding no place for himself. Not only his own actions, even the righteous acts of the Bolsheviks, raise doubts in him. But today with a certain degree of pride I can say: "Blood and sweat" - from the beginning to its end a book about people of my country, about thier fate and drama. About a difficult and painfully unclear way of the Qazaq people...".

Even the quotations from the work presented separately from the whole text carry a complete and bright thought (unfortunately, they do not present in English version of the text):

"Lord, how insatiable is the Earth! Since the creation of the world, the land both with indifference consumed infants, not yet had time to become conscious of themselves, and it took in its cold embrace not squeamishing the old people. In the darkness of the ages, the Earth ingest people that are gnawing each other and fighting with each other, who are unable to live without hate and murder.“

"He knew that where money was made, there could be no place for hesitation. A person who makes money must be heartless, unfeeling, like a thick-skinned, throaty Abaisin. "

"From time immemorial, the one who knows more is ahead."

Abdi-Jamil Nurpeisov was born on October 22, 1924 in the Aral district of the Kyzylorda Region. In 1942 he was mobilized to the front at the age of 18. Participated in battles in the Kalmyk steppes, in Ukraine and in the Baltic States.

After the war Abdi-Jamil Nurpeisov published his first autobiographical novel "Courland", dedicated to the battles on the Courland bridgehead.

During the period from 1961 to 1970 his trilogy "Blood and sweat" was published.

In 2000 he published his novel "Final Respects", which tells about the ecological problem of the Aral Sea, which was awarded the Sholokhov Prize in 2003.

Abdi-Jamil Nurpeisov's candidacy was proposed for the Nobel Prize for Literature in 2013.

Abdi-Zhamil Nurpeisov is the creator of the literary almanac "Tan" („Morning”), the founder and the first president of the Qazaq international PEN-club.

About a period of his life being in the army the writer told:

"I did not fight properly ... My military destiny looks like this: as tomorrow is the offensive, so I was sent from the front to study or other place on any other reason. In a word, I never fired a single shot at the Germans. And all five of my relatives - my stepbrothers, as well as my father's brothers - were killed. They managed to write farewell letters to their families and laid down their lives in the battle for Stalingrad. My father was recruited to the army on January 5, 1942 and died in a night battle near Ternopil in western Ukraine. From my family only I returned alive to my home.

It seems that fate itself kept the warrior - it was destined for him to incarnate everything that he experienced at the front and in a peaceful life, in his literary works. Without no doubt the works of the writer will be inspiration for many generations.