Ivan Shchegolikhin, a prominent Qazaqstani writer, was born on April 1, 1927 in Novo-Troitsk, Kustanai region, into a family of immigrant peasants. His family was exiled to Qazaqstan during the years of collectivization. Before the Second World War, Ivan Shchegolikhin lived with his parents in Frunze (at present time Bishkek). 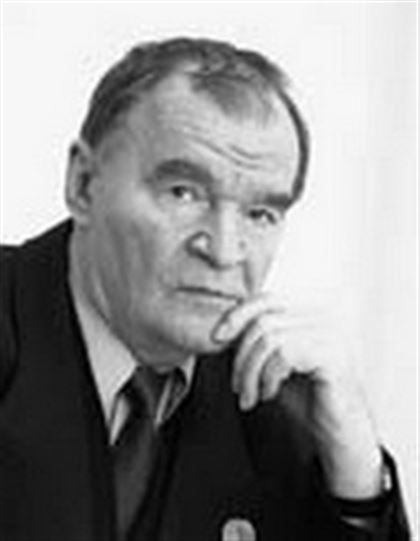 a picture is from caravan.kz

After nine years of schooling, he got into an Aviation college. At the end of the Second World War, he was told by doctors that he had epilepsy. He could not accept his health condition and did not come on time to a military unit, where he used to serve. In fear of being punished after a disciplinary offence, he decided to desert, to change his last name. He entered the Alma-Ata Medical Institute in 1945 already having new documents for Eugeny Pisarenko, born in 1928.

Because of the betrayal of his beloved woman, he committed a crime. Being a fourth-year medical student, he was sent to serve his sentence in a camp. Ivan Shchegolikhin spent there three years of his life. After imprisonment, he was restored at the Medical Institute. It was achieved thanks to support of the Presidium of the Supreme Council of Qazaq SSR. He successfully graduated from the Medical Institute and became an important person of the society.

For 20 years he was a Head of the Prose Department, a Deputy of the Editor-in-Chief of a prestigious Qazaqstani magazine “Prostor”, became a national writer of Qazaqstan, a winner of the Award named after M.Auezov, a holder of the “Parasat” order.

Ivan Shchegolikhin’s wife, Ivetta was a doctor by profession, his daughter was a ballet dancer, his son was an artist.

This extraordinary man, who wrote books as a vocation, had a tragic life. The beginning of his career was joyless. The author said, that he tried several times to publish more than twenty novelettes and novels, written by him, but publishing-houses rejected him.

He let his failure and disappointment drive him to be better. As a result of his efforts, his first story was published in a republican magazine “Prostor” in April 1954.

The writer said in one of his last interviews, that “he started to write because of deep dissatisfaction with his life. He felt unhappy himself, until he found happiness in writing”.

Independence of Qazaqstan made Ivan Shchegolikhin to catch his second wind. Being a representative of the Senate, the upper house of parliament of Qazaqstan, he wrote in his works about tolerance, brotherhood of people to each other. Bearing in mind, that Qazaqstan is home to more than 130 nationalities and ethnic groups, he put a great contribution in keeping stability and harmony in the country by his writings and active political and social stand.

Although Ivan Shchegolikhin began writing the autobiographical novel “I do not regret, I do not call, I do not cry ...” in 1986, it seems that he dreamt of doing that all his life. It could be seen from his last statement to the novel. He did such a confession: “... I did not know on that day that it would pass ten, twenty, and thirty years, I would become old and tell my grandson: those were the best years of my life. I regret nothing”.

The main idea of the novel is to remain faithful to your ideals, to be a person of high moral integrity, despite all the obstacles and barriers in your life.

Ivan Shchegolikhin builds his story in the first-person, it helps the readers to feel emotions of the narrator and understand him better. He emphasizes that the story is told in the first-person, saying at the beginning of the story: “It is a story about time, about life, about Myself. It is about the Soviet reality, about childhood, about the Second World War, about Youth and First Love, about a camp in Siberia in the early 50s ...”.

The writer narrates about his own life, about his parents, close people, reveals moments of his biography, that nobody knew before. As the key plotline of story, he puts the idea of love: “I devoted all my life to only one thing - to Love. Dying tomorrow or at least fifty years later, I would say: it is worth to live in this world only for the sake of love. It may turn any trouble into hope. There are no other values in the Universe. Although the modern world is trying to impose them on us” (Quote from the novel “I do not regret, I do not call, I do not cry ...”.