‘Cheerless Jamal’ is the first novel in Qazaq literature

Myrzhakyp Dulatov is known as a poet and prose writer, author of poetry collections and the first Qazaq novel ‘Cheerless Jamal’. The novel, written in 1910, remains one of the most widely read books of Qazaq authors.

The main problem that arises in the novel is the powerless and voiceless status of women in society.

The title of the novel itself reveals its content. It tells about the difficult fate of a Qazaq girl who became a victim of the patriarchal-feudal system that ruled in the Qazaq aul at that time (‘aul’ is translated from Qazaq language as a ‘village’).

The novel has a peculiar structure: it consists of both prose and poetry genres. The author uses ‘the text in the text’ technique.

The heroine dies unrecognized in an unfamiliar space, but people found letters in her pockets, from which they learn that she is Baizhan's daughter-in-law, they remember her bitter fate after the death of her beloved Gali.

The plot of the novel is as follows.

Sarsenbay and his wife Kalampyr did not have children. He did not dare to marry for the second time because of tender love and deep respect for his wife Kalampyr. His hesitations had blown away after an accident that happened with him in a neighboring aul. When he was there as a guest one of his friends called him ‘ku bas’. It means in Qazaq language ‘bare pate’. It sounds very insulting for those people, who are childless.

Offended and saddened Sarsenbay decided to marry again. Having received the consent of relatives, influential people of his aul and his wife Kalampyr, he took as his second wife a fourteen-year-old Sholpan, who in due time gave birth to his daughter, Jamal. 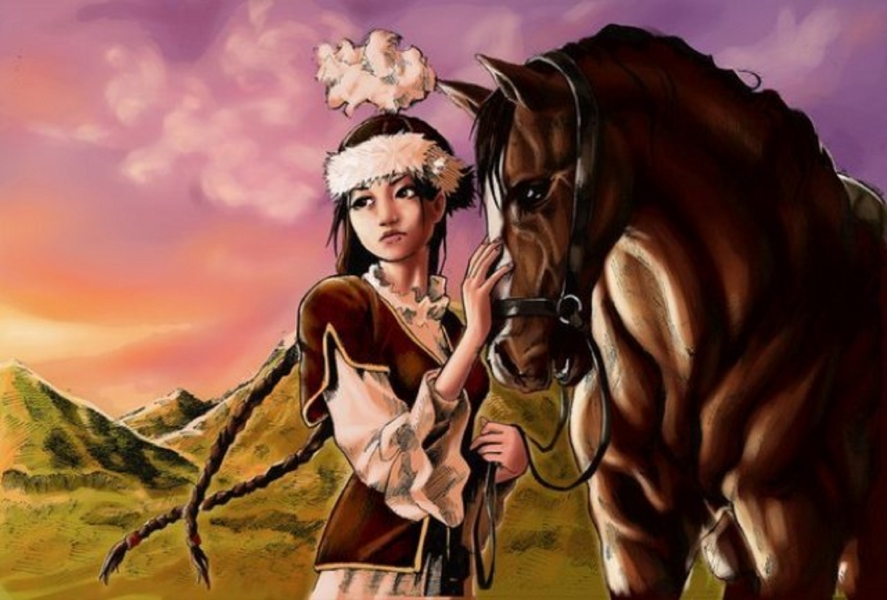 The novel describes in detail the process of education of Jamal, the tenderness of her parents in bringing up, the childhood and youth of a smart and beautiful girl. Qazaqs have a national custom - in childhood and adolescence they indulge their daughter, she is free from strict prohibitions, is considered a guest in the father’s house.

An interesting social background is seen in the novel: an aul and insight on the way of life of its inhabitants, a process of elections of volost governors, people's judges, passions around it, aggravation of relationships, etc. But the main thing for Myrzhakyp Dulatov is the image of a woman who lives in anticipation of happiness, who is looking for something unusual in life, entering into life with great enthusiasm.

The author created a complicated and interesting female image in the novel ‘Cheerless Jamal’. Jamal is a good-looking and at the same time a stubborn, proud and strong girl. This makes her stand side by side with beautiful female images created in the Qazaq epic literature. There are a lot of new things in behavior and actions, in thoughts and feelings, in relations with others, in aspirations and, in general, in the tragic fate of Jamal, happened due to transformation took place in Qazaq auls at the beginning of XX century.

When the father arranged a traditional feast (toy) on the occasion of the birth of his daughter, in the warm farewell of those present there were many wishes for her: to be the favorite of not only parents, but also all aul inhabitants.

At that time there was already a thirst for enlightenment in the auls. Jamal’s father contemplated for a long time what kind of education to give to his daughter: mullahs advised to give religious upbringing and education, others recommended teaching by the so-called ‘new method’, which is oriented towards the European type of education. The choice of his father was made in favor of religious education. But Jamal secretly from her father, with the support of her mother, took lessons conducted according to the ‘new method’.

Jamal was a quick study and she was eager to work more. Having learnt to read and write, she read various folk works with great enthusiasm. Her chest was full of books (at that time books in the Qazaq language were published in Qazan, Orenburg). At the request of her father or elders, she began to read interesting books to home guests and aul inhabitants. In this way Jamal became one of the most loved and respected people in the settlement.

But very soon evil force interfered in her fate. Baizhan, a rich and influential bai of the volost (‘bai’ means a rich man) wanted to marry his son Juman to Jamal. Having learnt that Sarsenbay had an extraordinary daughter, he sent matchmakers to him. Jamal’s father accepted his proposal.

Jamal understood that her fiancé Juman was not a couple for her. She was very upset by the decision of Sarsenbay. Her father’s behavior caused in her a sensation of disillusionment, despair and frustration. Her sad thoughts were reflected in verses, which she secretly composed and carefully kept in the chest.

Her mother, Sholpan found her poetry by accident and compassionated her daughter’s sufferings. She reproached her husband that, because of the benefits, he decided to give his daughter to an unloved person.

In response Sarsenbay said that Baizhan would cause their family problems, if they would try to marry Jamal off to another person, because he was strong and powerful. He believed that it was her destiny.

A meeting of Jamal with a young, handsome man named Gali, who had come from the city to visit his relatives became an unexpected turn of events.

Young people carelessly fell in love with each other. Gali was determined to rid the girl of her unfortunate groom and take her to the city. After a long struggle with herself Jamal agreed and at night Gali with the help of his friends and Jamal’s mother left aul.

Gali’s friends helped the young couple to settle in a safer aul. But their happiness did not last long, suddenly Gali fell ill and died, Jamal found herself in boundless grief and despair.

Heartbroken Jamal was forcibly given in marriage to Juman, because the bride price was already paid. Offended by the precipitated flight of Jamal, Juman took revenge on her, beating her constantly, scoffing at her and bating her pride.

Unable to suffer humiliations Jamal rode a horse at night having an aim to get the city, hoping to find shelter there. But because of the snowstorm, she lost the way, froze to death in a snowdrift – the novel ends with this tragic event.

The writer by his work shows that there were no more oppressed being in Qazaq society than a woman. The daughters, not only in poor families, but even of wealthy people could not independently choose their own destiny.

In the novel, Jamal escaped with Gali against the wish of her father, it caused a storm of anger and discontent from the side of her relatives.

Myrzhakyp Dulatov with great skill reveals the characters of his heroes, their actions, manner of conversation. The image of Jamal was revealed especially successfully. The girl is different from her peers: she is smart, daring, has a poetic gift. The writer does not accidentally list the names of the books she read. This touch complements the image of our heroine and tells us about the rich inner world of a girl.

Although Myrzhakyp Dulatov does not give us description of the appearance of Jamal, the reader easily may imagine her look on the basis of additional information about her family and especially from the letters of her beloved Gali.

The author intentionally does not focus on the description of her appearance, her inner world, spiritual fulfillment is more important for him. Therefore, rejected, condemned by the townsfolk, unhappy woman causes deep sympathy of the reader. She attracts with her courage, thirst for love, loyalty. Despite the external strength of the near-minded Juman, Jamal is incomparably stronger internally, emotionally, and spiritually richer.

Internal tension, drama hold attention while reading the novel. Like a real literature, ‘Cheerless Jamal’ nurtures the True Human in a Man. Reading the novel, you experience strong emotions: compassion, empathy, admiration, a feeling of love. It means that the writer's work fulfilled its task: it caused noble impulses, aspirations, enriched its readers spiritually.