Maurice Simashko is a well-known Qazaqstani writer, Laureate of the Prize for Peace and Spiritual Accord, established by the President of Qazaqstan, a Winner of the Abai Literary Prize in 1986 for the translation into Russian language of Ilyas Yesenberlin's trilogy 'The Nomads’, author of numerous literary works on the history of Central Asia. 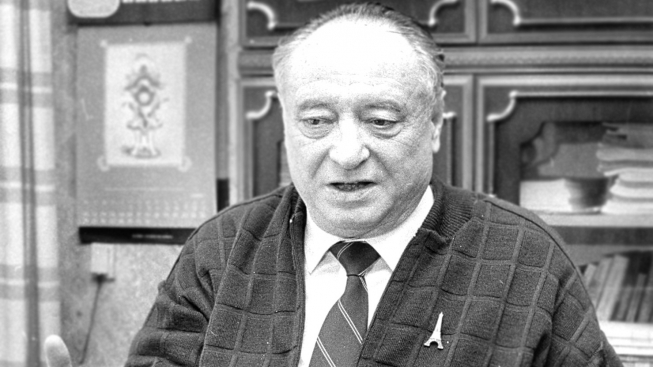 He is the author of 20 books published in record editions in more than 40 languages of the world. On the basis of scripts, written by him about ten films have been produced.

Maurice Simashko in one of his interviews to the question why he worked mainly with historical material, answered: ‘Because history repeats itself, because it teaches us to live’.

‘Simashko’ is a writer's pseudonym, he made that name himself. Maurice Simashko was born on March 18, 1924 in Odessa (Ukraine), in an international family of a Jew from Odessa and a Volga German woman.

His father, David Shamis, worked as a bacteriologist in Ukraine, was arrested in 1937, but was soon released and later became the first director of the Qazaq Institute of Microbiology in Almaty.

His mother studied at the Faculty of Mathematics. The war caused to move Maurice Simashko’s family from Odessa to the Turkmen city of Mary (named after the ancient city of Merv).

After school, the future writer entered the two-year teacher’s institute, he studied there the Russian language and literature.

In 1943, upon his request he was sent to serve in the army. Maurice Simashko graduated from a sniper school and served on the Turkmen-Iranian border during the war.

In 1946, Maurice Simashko graduated from the Odessa Teachers' Institute, in 1950 he got a diploma of a journalist from the Qazaq University named after Kirov (now it is Al-Farabi Qazaq National University).

He worked as a journalist in different newspapers and magazines, particularly in Almaty he worked in a prestigious magazine ‘Prostor’ and Publishing House ‘Zhazushy’.

He was a member of the Writers' Union of Qazaqstan, a Head of the Qazaq PEN-club. He became a prominent Qazaqstani writer and a translator from the Qazaq language.

One of the most famous works of Maurice Simashko is the story ‘Emshan’. It tells about how the renowned ruler of Egypt, Sultan Beibars, who was got out of the native country and his relatives as a child, leaves his throne in Egypt and returns home as an ordinary wanderer.

The novel ‘Semiramide’ is about the era of Catherine II. In this novel, Maurice Simashko talks about the genesis of the Russian Enlightenment, tracing its development from the beginnings of Peter I to Catherine's times. This book by Maurice Simashko in 1999 was nominated by the International PEN Club and the Union of Writers of Qazaqstan for the Nobel Prize in Literature.

The other well-known piece of art of Maurice Simashko is an autobiographical novel ‘Gu-ga’, on the basis of which Odessa Film Studio produced two-part film. This novel is devoted to the front-line life of the penal battalion. The plot is based on the biography of the writer who, during the war, found out himself in the penal battalion. Maurice Simashko was one of the few authors who told the truth about how the ‘suicide bombers’ fought. They fought on the front line, they were sent to the most disastrous places, and there was a firing squad behind the penal battalion - so that they would only move forward, otherwise each of them could be shot ... The cry ‘Gu-ga!’ was the war cry of ‘suicide bombers’.

His last book ‘The Fourth Rome’, in the opinion of readers and literary critics, is an outcome of the writer’s life. For many years, the “Fourth Rome” existed only in a handwritten version.

At the end of his life, in 1999, at the age of 75, Maurice Simashko went to his historic homeland, Israel. Unfortunately, after a year the writer passed away ... They say he missed Qazaqstan, his friends and readers.

The full-length documentary ‘The Worlds of Maurice Simashko’, filmed by director Alexander Golovinsky at the Kazakhfilm Studio named after Shaken Aimanov, was awarded the special prize of the ‘Literaturnaya Gazeta’ (The Literary Journal).

The film was shot on the basis of an autobiographical book by Maurice Simashko ‘The Fourth Rome’. It tells us how his novels ‘Mazdak’ and ‘Semiramide’ appeared. The film shows some interviews with the author himself.

The documentary for the first time was demonstrated on December 11, 2015 in Almaty.