Ilyas Esenberlin and his trilogy ‘The Nomads’ (Part 2)

The third volume of the trilogy ‘The Nomads’ of Ilyas Esenberlin is called ‘Despair’. It shows a long, exhausting struggle of the Qazaq people with numerous foreign conquerors for their independence, a preservation of state borders and the history of relations with Russia. 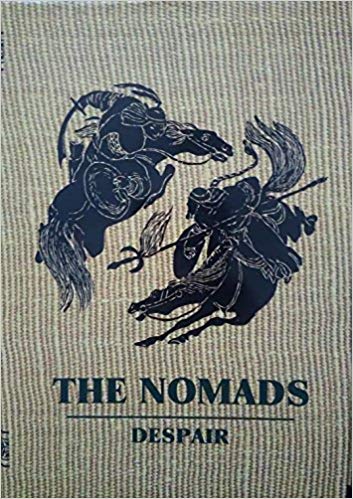 … The army of many thousands of Tsewang Rabtan, who was a Choros-Oirat prince and the Khong Tayiji (in translation from Mongolian into Qazaq language means ‘Khan’) of the Dzungar Khanate already stood in the Dzungar gate (It is from geographical and historical point of view a very important pass between China and Qazaqstan, through the gate passed the Great Silk Road, at present moment it serves as a state border between Qazaqstan and China). The grandson of Qazaq Khan Tauke Abulmansur would lead the troops to a battle. After this fight, he was called Abylai Khan.

The Dzungars, having broken into the Qazaq steppes, did not kill only those who went mad at the sight of blood and death. Being survived by a miracle people fled from the Semirechie.

The country like a broken glass had cracked on Qazaq tribes, writes Ilyas Esenberlin.

Despair was waiting for everyone. In the Anrakay hills, a famous battle took place, uniting all Qazaq warriors, led by Khan Abulkhair. At that moment people cast mind back that their power was in unity. The adviser of Abylai-khan, the famous Bukhar-zhyrau, also mentioned Abylai-khan about it. As far as people themselves would not understand that in the unity was their salvation, no one was destined to cope with the enemy. When Abylai-khan had cracked down rebellious Qongirats (now Qazaq-Mongolian tribe), Bukhar-zhyrau left the Khan without saying goodbye to him. At the next meeting, the Khan asked him: ‘Didn’t you like that I punished the obstinate tribe?’ Bukhar-zhyrau answered that very soon all people in the Steppe would seem to the Khan to be the obstinate and that ordinary people had only one desire to live in peace without wars, bringing with themselves only despair.

When the khan was fair and did good deeds, Bukhar-zhyrau was ready to praise his valor, but nobody could hide the truth with flattering speeches and sweet fables. ‘People are trustful, but nobody should laugh at their trustfulness’, - says the wise adviser of the Khan.

Becoming of Abylai as a statesman and as the khan of all three hordes, although the Russian tsarina never signed an appropriate Decree, took place during the terrible years of the Dzungarian invasion, and his main task was to unite all Qazaq tribes and clans. Abylai remembered lessons taught by Bukhar-zhyrau for the rest of his life.

When he was accused of killing the buffoon named Botakhan, Abylai khan, as he was made of common clay, went out in front of the people, apologized and paid kun (a sum of money to be paid) as for three adult men. His strength was in the people's support. Abylai khan cherished his friendship with the Batyrs and Zhyrau. ‘Batyr’ is an honorific term of the meaning ‘hero’ in Qazaq language. One of them was the temerarious Olzhabay batyr. Up to the age of 40 he did not know which occupation to give preference: to become an akyn (an improvising poet or singer in Qazaq culture) or a warrior. But he always found talented akyns and prepared them for performances. He himself knew all the stories and legends by heart. And yet there was not a single decisive battle in which he would not participate.

And exactly that fact that Olzhabay batyr was among the defenders of the buffoon Botakhan, makes Abylai khan to change his mind and to punish severely those people who were biased against him.

Abylai khan enjoyed great fame throughout the Qazaq Great steppe and beyond. He was a farsighted and independent ruler. Whatever fluctuations did not occur in the steppe Abylai khan always kept an eye out and was ready to confront any attempt to conquer of the Dzungarian yoke.

At the end of his life, the dying Abylai khan said such bitter words: ‘I always tried to achieve my goals in a bloody way. And now I see that there are other ways’.

In these words of the Qazaq Khan we can see Ilyas Esenberlin’s life philosophy. He put first compassion and participation in the fate of other people.

As a reply Bukhar zhyrau said dourly: ‘You are not able to say anything else, Abylai. Even before death, the golden eagle will never sing like a swan, but what is your last wish, Abylai khan?’.

It was very quiet in the khan's yurt. Bukhar zhyrau seemed that Abylai khan fell asleep, when suddenly the dying man opened his eyes and said in a clear, calm voice: ‘I engaged in the first battle of my life here. Here, in Turkistan, next to my ancestors bury me’. ‘Your wish will be fulfilled, my khan’. – answered Bukhar zhyrau. Abylai khan nodded his head in agreement…

Ilyas Esenberlin returned the name of many Qazaq heroes, worthy of imitation. After gaining by Qazaqstan its independence understanding of the writer's civil feat is becoming more deep and weighty. In many respects thanks to Ilyas Esenberlin’s trilogy, the Qazaqs have become more careful about the historical past. We became more serious in assessing our current achievements.

Ilyas Esenberlin noticed that the more a person thought about the future, the more he should think about the past. Knowledge of the past is necessary for us, in order to use our experience, to be able to understand the realities of modern life, to form our own life position and not to be mistaken in the choice of values.