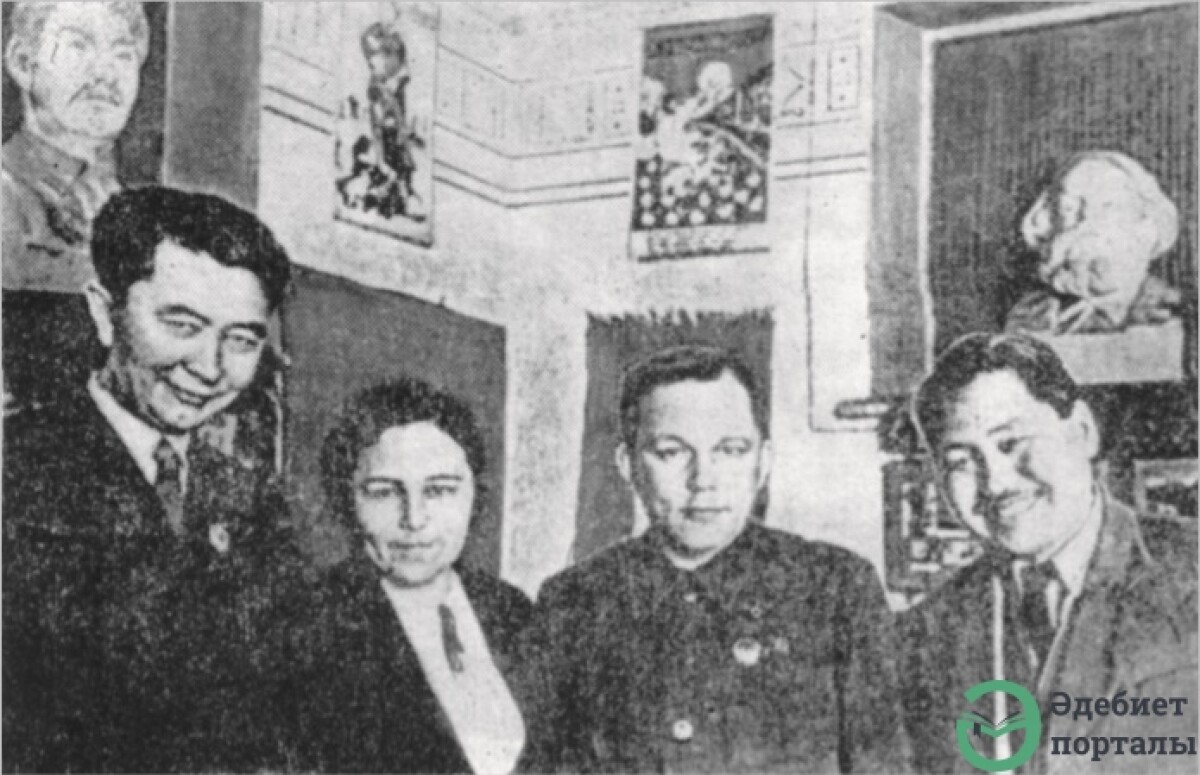 The sad news that came on June 22, 1941, irritated the entire people of the Union. At that time, Mukhamedzhan Abdikhalykov was the Deputy People's Commissar of Education of the Kazakh SSR. As soon as the war broke out, the bureau of the Central Committee of the Communist Party of Kazakhstan approved him as the chairman of the city executive committee of Almaty. A new leader has a lot of work to do. It is wartime now, and time is tight. However, the mayor tried to catch up with all the urgent measures. First of all, even though they were starving, they sent the wagons of clothes and food to the war veterans. In addition, the establishment of various production facilities in Almaty, relocated from the western regions, provided employment and housing for workers relocated to the rear. The passports of foreigners were registered, and they were provided with everything from food to clothes.

It seems that Mukhamedzhan Abdikhalykov led a large city like Almaty, a large center of production and education in the early days of the war. First of all, the young leader was well-versed in the work of the party and the Komsomol and knew how to govern the country as a whole. This was acknowledged by the leaders of the center. It is no exaggeration to say that the transfer of the People's Commissar to the post of mayor during the war was a victory for the Soviet authorities. Secondly, in the midst of the turmoil of the war, a wise and cunning leader was needed to calm down and direct the noisy people of the city. In this regard, the goats of the Center did not go astray, and Abdikhalykov did not deviate from the straight path, acted swiftly and held the reins of the city in his work. Thus, a year had passed in the blink of an eye. Mukhamedzhan Abdikhalykov's career in administration ended with this, and in 1942, the V Plenum of the Central Committee of the Communist Party of Kazakhstan appointed him as the Central Committee's Secretary of Propaganda.

Mukhamedzhan Abdikhalykov was a leader and cared for our writers and historians in the fields of literature and culture, history and art, who tried to present our national history and literature in a new light. In 1943, the first book “History of the Kazakh SSR” was published, edited by Mukhamedzhan Abdikhalykov and academic Anna Pankratova. As soon as this book was published, the number of people who brought candles kept increasing. Historians know that an ideological battle in the country during 1942–1947 was mainly connected with the writing of the first part of the book “History of the Kazakh SSR” and the famous “Bekmakhanov affair”. In the second edition of the “History of the Kazakh SSR” in 1949, the previous concept of the Kenesary movement is presented unchanged. Eventually, Moscow intervened, expelling Bekmakhanov from the party and persecuting him. In this regard, Ilyas Omarov will be removed from the secretariat. In such a narrow period, when those who wanted to kick the historian, who called himself a Kazakh, showed up, Mukhan spoke one word, remained in his opinion, and took a one-sided civic view. When Ermukhan was hitting his head on the mountain or a rock, Mukhan was found near him. What kind of friendship example is this?

Friendship has its ups and downs. Mukhamedzhan Abdikhalykov, in his time, was also highly respected by the famous Kazakh writer Mukhtar Auezov. It is one example of this. A great writer signed the novel “Abai”, published in 1942, and presented it to Mukhan: “A friend of literature is the comrade Mukhamedzhan! We are waiting for your test and friendly opinion”.

Mukhamedzhan Abdikhalykov, a Kazakh from Karaganda, continued his education, and after graduating from high school, he studied at the FZU in Petropavlovsk. After graduating, he was admitted to the Kyzylorda Institute of Public Education in 1926. His son, Akhan-Akhmet Baitursynov, taught him Kazakh language and literature there. Two years later, the Commissioner for Public Education, Oraz Zhandosov, opened the Institute of Public Education in Almaty. Thus, a group of students studying in Kyzylorda headed to Almaty.

Father's wish, mother's heart pushed the young people from Karaganda to the heights of motivation. After graduating from high school, the energetic young man moved to Kyzylorda and then to Almaty. He studied at KazPI. This is the most beautiful, brightest, and interesting time of Mukhan's life. All these years have instilled in my heart an unquenchable warmth. All Kazakhs set an example of honor and nobility. He saw Akhan and listened to Saken.

When our heroine was studying at the Kazakh Pedagogical Institute in Almaty in 1928–1932, Akhmet Baitursynov worked at the institute. He gave a lecture and tutored the students on the subject “History of Culture”. Khalel Dosmukhamedov also taught “Anatomy and Physiology”. Alimkhan Ermekov, a mathematician and an Alash activist, had tutored me as well. During the times of Baitursynov, Dosmukhamedov, and Ermekov, some Russians were left behind in terms of language skills. One day, a great Russian professor named Patov came from Moscow to give his lecture. He was a friend of Mayakovskiy. He was a very educated and intelligent person. Also, he gave his lectures on “Human Culture” to the whole university. All professors were supposed to attend their courses. Akhan was among them. When he finished speaking, Akhmet Baitursynov appeared in the middle, asking for permission. He emphasized his report much more than the Russian scientist did. After Akhan's speech, the new Russian professor approached him, took his hand, and said, “I do not know much”. I apologize for speaking in front of you.

By the way, Saken Seifullin also taught students of KazPI, such as Mukhamedzhan Abdikhalykov, on the subject “Kazakh literature”.

Similar articles
#ESSAY
Some excerpts from the life of the famous doctor Akkagaz Doszhanova
2513
#ESSAY
Some passages about how Bibigul Tulegenova came into the field of art with a nightingale in her throat
2868
#ESSAY
“Zhanibek sings, Akseleu admires”
1119