The greatest love affairs in history shows that many famous beloved met a sad end. A lot of countries may declare that they have at least one romance tale about such a bright and great adoration! The most known stories are about Romeo and Juliet, Tristan and Isolde. Qazaqs have such a love story as well. The main heroes of the story are a Qazaq fellow Kozy Korpesh and a Qazaq girl Bayan Sulu.

As a folk tale says: Parents of Kozy Korpesh and Bayan Sulu were very good friends. To seal a pact of friendship they agreed to wed their kids. So, their kids were engaged to one another before their birth. Suddenly, a father of Kozy Korpesh died in a terrible hunting accident. After his death Bayan sulu and Kozy Korpesh were born. They grew up separately, but they knew about their engagement. When they became adult they got acquainted by chance and were enchanted by each other. But her father by that time had another intention with regard to his daughter. He wanted Bayan Sulu to marry another man. It was a local fellow Kodar. Earlier he helped Bayan Sulu’s father to save from starving his cattle. So Kodar appeared as a wall between two beloved. Bayan sulu and Kozy Korpesh got involved in a triangular situation. Kozy Korpesh lost his life first while fighting for love. A grief-stricken Bayan sulu wanted to avenge his beloved’s death and decided to use a stratagem. She gave a word to become Kodar’s wife if he would bore a well with access to drinking water. Kodar with great pleasure accepted her clause and set to work. While digging the well he held with his hands Bayan’s queue. He dug deeper and deeper… And Bayan sulu very quick cut her queue. Kodar died in the hollow and Bayan sulu’s beloved was avenged. On Kozy Korpesh burial place Bayan sulu killed herself by plunging the dagger into herself.

According to the folk tale, on the the burial place of a loving couple grew out a miraculous rosebush … But its flowers did not live long. Very soon they shriveled, became brown, dried up.

Authenticity of the age of the folk tale proves a unique archaeological find – a golden belt. On its surface one can see a seated female figure surrounded by poplars. A woman was bent over a head of a dead man. The scientists say that the belt was made in the 18th century. It was found in the eastern part of the Irtysh river near the Altai Mountains. At present moment the belt is exhibited in Hermitage.

The love light of two beloved inspires poets and writers for many centuries. Even a famous Russian writer Aleksandr Pushkin upon arrival to the place where it happened wrote down the folk tale for himself.

In the memory of Kozy Korpesh and Bayan Sulu the younger brother of Kozy Korpesh’s father built a Mazar or a mausoleum near the aul Tansyk situated in the East Qazaqstan Region. Mazar is a grave of a muslim ‘saint’. It is a rare example of early medieval architecture. 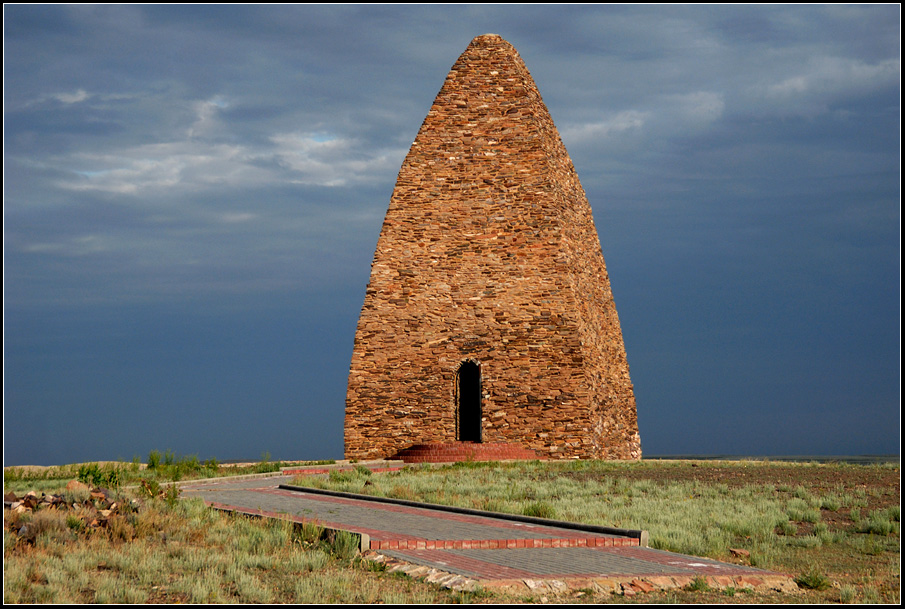 Kozy Korpesh and Bayan Sulu’ mazar is added into the list of 100 sacred objects of Qazaqstan.

At the same time Qazaqstan celebrates Valentine’s Day on April 15. The day, dedicated to a big love of the heroes of the Qazaq folk tale ‘Kozy Korpesh and Bayan Sulu’ is an alternative to the international holiday of Saint Valentine’s Day, which is celebrated on the 14th of February around the world.

‘Kozy Korpesh and Bayan Sulu’ is a heartbreaking story, that has become a great legend.