The book about the adventures of Dastan and Arman is one of the few Qazaq works in the genre of fantasy, which is read widely in the CIS countries, especially in Qazaqstan and Russia. The debut book captured the hearts of the readers immediately after its publication. The first edition of the novel was issued in 2015.

Ilmaz Nurgaliyev created a work in the genre of fantasy, based on events that took place in the seventh century on the territory of the Western Turkic Khaganate. It is not a classic fantasy. You will not find wolfmen, sorcerers, warring nonhuman races in it. But, like many books of this genre, he uses some kind of romantic spirit of antiquity. He draws a world where bays (“bay” means “a wealthy man” in a Qazaq language) and batyrs (“batyr” means “an epic warrior” in a Qazaq language) live, and people believe in ancient legends.

And we can see it already taking a look on the book’s cover. 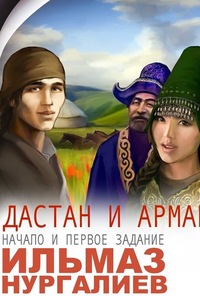 The main hero of our story is a young jigit (“jigit” means in a Qazaq language “a dashing young fellow”) Dastan. Dastan is in love with Armanai and the girl also loves him. And they are engaged since childhood, the fathers of young people were once friends. However, Armanay’s father is against marriage of his daughter with a poor Dastan. To get rid of the annoying groom, Kadyr decides to give Dastan seven tasks. If he performs all tasks, he will get the arm and heart of Armanai. The first of these tasks is described in the book. I will not say what it is, I will only say that history lovers will be interested in playing with a very legendary character.

As you can see, the author chose a clear mythological structure as a plot. Like Hercules, who performed twelve feats, Dastan will carry out Kadir's tasks and hopefully bring them with dignity.

To describe all Dastan’s feats the author hopes to publish 8 books.

It should be mentioned a rather delicate play of words. “Dastan” in a Qazaq language means “a legend”, and “Arman” is “a dream”. We see a picture where Dastan striving for his Dream, incidentally becomes a hero of the legend.

In his interviews the writer tells how he came up to the idea to write a Qazaq fantasy. According to the author, love for reading fictions pushed him to create his own works. "We come to this world for a reason and must leave some trace behind us. Thanks for my love for reading and good imagination skills, from the very childhood in my head there were certain images, characters and story lines. I think that sooner or later it would necessarily happen and I would share it with my readers "- says the author of the book.

Ilmaz Nurgaliyev, watching his children, once realized that they live and develop on foreign heroes, like SpongeBob SquarePants, Teenage Mutant Ninja Turtles, Iron Man, Transformers. All this is quite interesting, but absolutely alien to the Qazaq people’s images. At the same time, children often do not know who are Yer Tostik, Alpamys batyr and other mythical and historical figures of Qazaq folklore. Therefore, he decided to show the world a rich layer of Qazaq national folklore.

Fantasy today is quite a popular genre, therefore he chose it as a form and the most accessible way to his reader. The author believes that the whole history of the ancestors of the Qazaq people is a great fascinating fantasy. The stories about the feats of the Qazaq batyrs, the life of aqyns (“aqyns” are improvising poets and singers in Qazaq culture), shamans and a simple nomadic people are a whole world that can be fascinating and interesting for readers from different countries.

The writer is going to prepare an English version of the book in the short term, so that English-speaking readers can get a chance to plunge into the world of Qazaq fantasy.

In his work, Ilmaz Nurgaliyev was inspired by a fantasy novel of J.R.R.Tolkien The Lord of the Rings, George Martin's series of books The Song of Ice and Flame, as well as The Harry Potter Saga, written by Joanne Rowling.

But as the author of the book says “in my work I tried in no case to repeat myself and not to borrow any styles and techniques. We have enough images, myths and legends to create our own original works. There is our national very rich cultural layer, accumulated for many centuries, but so far it is poorly reflected in popular literature. I think that everything is ahead, and the world will still be read out by the works of our authors”.

Here is some feedback of the readers of the book.

“A great adventure novel, very dynamic and eventful. It can be read very easily, at the same time it has a very deep meaning. A lot of plotlines bring to mind our everyday life situations”.

“I bought the book on the recommendation of my friend. I read it at every time when I had a spare time. I liked it very much. I express my gratitude to the writer for pleasure that I’ve got during reading it. If it continues in the same vein, then the book has a promising future”.

The debut book of Ilmaz Nurgaliyev based on the results of the report of the international conference under the auspices of UNESCO, held in Ulyanovsk (Russia) has become one of the most popular books among Russian teenagers and young people in 2017.