Qobylandy batyr is the Defender of the Qazaq people

Folklore, as an oral folk art, is deeply rooted in the history of the Qazaq people. Folklore existed even before the formation of an intact Qazaq nation. This is evidenced by the few monuments of the Turkic writing of the ancient tribes, the predecessors of the Qazaqs, that have come to us. (For example: A Work of Mahmud al-Kashgari ‘Diwan Lugat at-Turk’ (The Compendium of the Turkic Dialects)).

The main genre of Qazaq folklore is the epos. It evolved over the centuries and its creator was the people. According to the genre, the epic is conventionally divided into two types: heroic and social. The struggle of the people for their independence with a certain enemy is shown in the heroic epic.

A significant place in the history of the Qazaq people is devoted to Qazaqs’ struggle against the Kalmyk-Dzungarian conquerors between the period of the XV and XVIII centuries. This struggle is reflected in epic poems. The epic ‘The Qobylandy batyr’ is considered to be one of the most famous Qazaq epic poems.

Epic works being handed down from generation to generation by different performers - ‘zhyrshy’ (a Qazaq folk singer-narrator), were sometimes subjected to changes in accordance with demands and interests of the society.

Therefore, today there are 29 versions of the epic ‘The Qobylandy Batyr’. Researchers determine that ‘The Qobylandy Batyr’ epos is spread in two versions - ancient, developed in the distant past, and late, substantially updated with many facts, interpretation of images in the epos is associated approximately with the XV century. It was an era of consolidation of the forces of fragmented clans, tribes and the emergence of the Qazaq Khanate. But in all versions of this epic, Qobylandy-Batyr is an ideal of the hero, a defender of his Homeland.

The most extensive version of the epic is the Marabai-zhyrau’s version. The Qazaq educator Mr.Ibray Altynsarin recorded it for the first time in writing from the words of Marabai-zhyrau. This piece of art is based on real historical events. It contains the names of real people and the names of localities. It should also be noted that for a long time Qobylandy Batyr was considered a fictional character.

Qobylandy batyr (he is also called ‘qaraqypchak Qobylandy’) is the national hero, commander. Originally from the Qipchaq tribe and its branch under the title ‘qaraqypchak’, he lived in the XV century during the collapse of the Golden Horde.

The story begins as follows.

A rich family lived in the country of the Qipchaqs, one of the largest Qazaq clans. The head of the family’s name was Toktarbai. His wife’s name was Analyk. They had no children. At one of the outrageous pageantries childless Toktarbai and Analyk felt offended by the words of the entertainer, who said that there was no place for those who did not have a son or a daughter.

Pleading to the spirits of ancestors, to God to send them children, and especially the son, traveling, pilgrimage to holy places bore fruit. Elderly parents (according to various sources, Toktarbay was already approximately 60-80 years old, Analyk - 40-60 years old) were rewarded with the birth of their son and daughter, which they dreamed of. The son was named Qobylandy, and the daughter - Qarlygash.

The future hero grew up so quickly that unknowing people took a 10-year-old boy for a tall young man. The epic says that at the age of five Qobylandy began to think deeply, when he was a 6-year-old boy he became mature in his mind. At the age of 12 he saddled his horse and put his armor on. 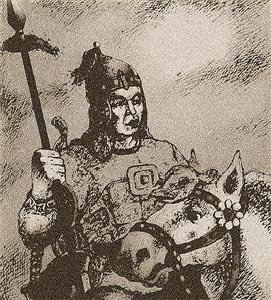 A well-known writer Ilyas Esenberlin in his work ‘The Charmed Sword’ (Part II, the trilogy ‘The Nomads’) describes the image of Qobylandy batyr as follows:

‘The very name of Qobylandy batyr struck fear into the heart of people. He was a very tall man with a huge head, hands that looked like a sledgehammer. His bones were bigger than camel’s bones and his fingers were harder than a wild sheep’s horns’. 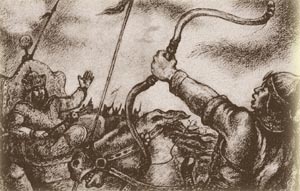 One day, Qobylandy batyr heard that one of the rulers of nearby states was looking for a worthy husband for his daughter. Overcoming various obstacles, participating and winning in pre-wedding competitions, Qobylandy batyr returned home with his beautiful bride Qortqy.

Qortqy sulu (‘sulu’ means ‘beautiful’ in Qazaq language) appears in the epos as a wise adviser of her husband. She had a gift of prophecy and knew in advance about many misfortunes in the future, but she understood that she could not change it, so she did what she could: she warned and helped Qobylandy batyr. For example, Qortqy sulu saw that one mare in a fortuitously encountered herd was wearing a foal, which was destined with proper care to become a worthy horse for Qobylandy batyr.

Qortqy sulu’s prophecy was fulfilled. The foal, named Taiburyl, grew into a real racer. Khan's daughter did not suggest that it was shameful for her personally to take care of the foal: to feed it, to water and to take for a walk.

The horse ‘overcomes a distance of six days in three hours’, ‘it flies, flapping its wings’ – says the legend.

Among the other advantages of Qortqy sulu were kindness and patience, which was enough to understand, sympathize and accept her rival, Qobylandy batyr’s second wife - Qarlyga. 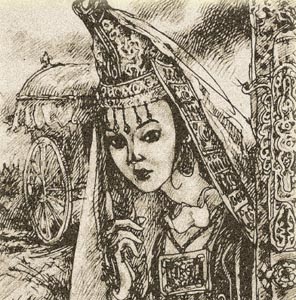 They met for the first time, when Qobylandy batyr was captured by her father, who was the Khan of a neighboring state. Qarlyga epitomized selfless love, which would stop at nothing for the sake of a beloved.

The daughter of the enemy Qarlyga helped Qobylandy batyr to escape from captivity, thereby betraying her own family. To stay close to him, the girl became a warrior and in a battle killed the most dear people.

A lot of space in the epic is given to a description of the struggle of Qobylandy batyr and his team with foreign invaders - Kalmyks. Kalmyk warriors are depicted as strong and powerful force, that attacks the territories, where inhabited Qazaq people. They used to ruin their homes, kill Qazaq people or capture. But they always give in to Qobylandy batyr and his team.

One of the Kalmyk warriors says: ‘If Qobylandy batyr arrives in my country, I will have a rough time. He is a falcon, we are crows. Crows are falcon’s prey’.

Qobylandy batyr did not divide his compatriots by clan, but loved and defended all of them, without asking what kind of ‘zhuz’ he came from. ‘Zhuz’ is a historically established union of Qazaqs.

Qobylandy batyr lived during the time of Khan Abylkhair (XV century), grandson of Jochi Khan (who was in his turn the eldest son of Genghis Khan). Abylkhairkhan was Qobylandy batyr’s commander.

It should be noted that Qobylandy batyr was the cause of dividing the Qazaq Khanate into two parts. It happened in the following way. A Judge Dayirkozha (from the Qazaq clan ‘Argyn’, nicknamed ‘Akzhol’ for his fairness) and Qaraqipchaq Qobylandy, being close to Khan Abylkhair, competed with each other for influence ...

However, Khan Abylkhair could not fulfill the request of Zhanibek Sultan, fearing to raise discontent from the Qipchaqs side.

He offered to pay the ransom as for three people. Insulted by this decision of Abilkhairkhan, Zhanibek Sultan, along with Kerey Sultan, separated, migrated to Mogolistan and created a separate Qazaq Khanate.

Qobylandy batyr took part in the political life of the Nogai Horde. He participated in the campaign on the city of Qazan, fought with the descendant of Edige batyr - Alshagir.

The son of Alshagir, Orak batyr killed Qobylandy batyr. His grave is located on the territory of the modern Aktobe Region.

There are a lot of colorful descriptions of feasts, wealth, different kind of competitions of young people and battles in the epic. For our readers the epic might be interesting and catching by its descriptions of customs and traditions of Qazaq people, like ‘suyunshi’, opulent feasts, lasting several days in a row and others.

‘Qobylandy batyr’ in terms of the depth of content and richness of pictorial means is one of the best folk creations of Qazaq literature. Epos translated into Russian, Polish, Czech and other languages.