Home LITERARY PROCESS ESSAY Some passages about how Bibigul Tulegenova came in... 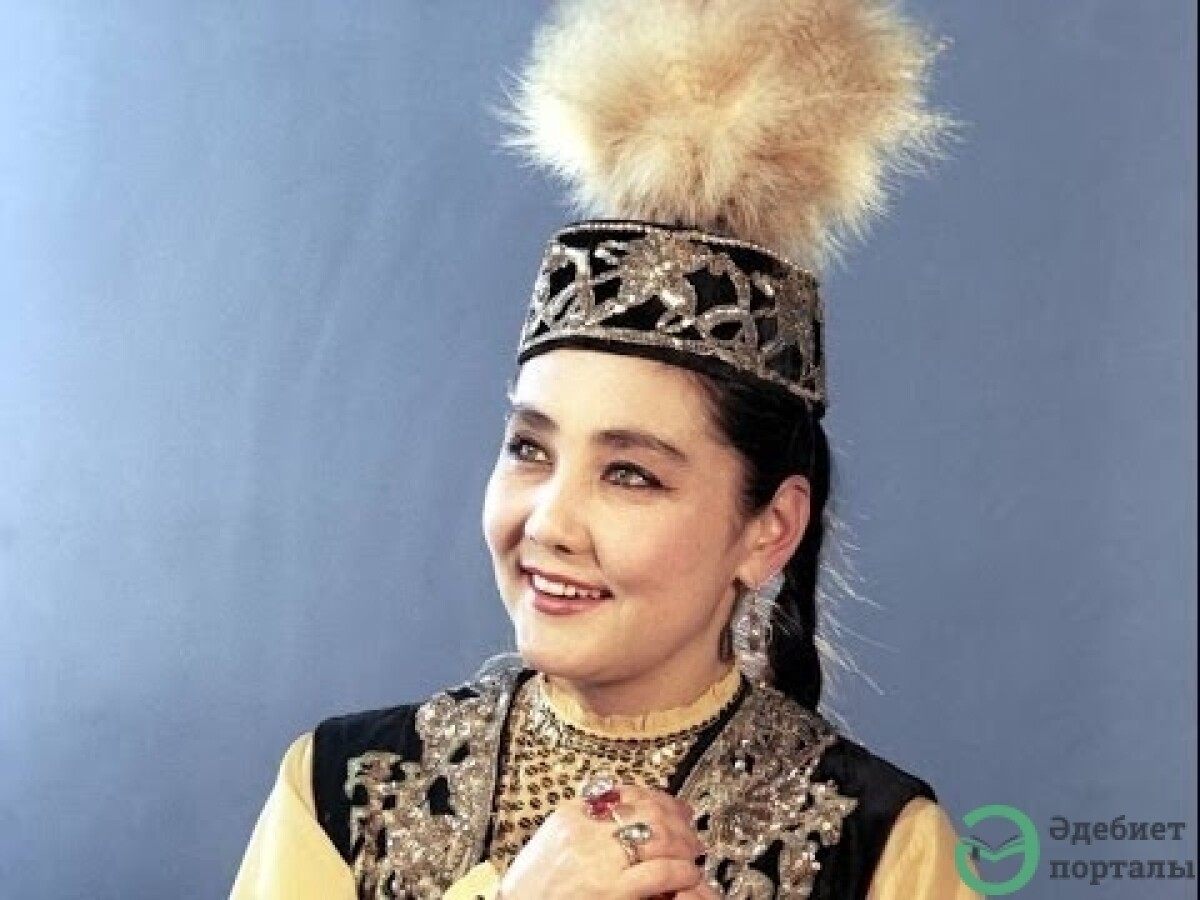 The famous Kazakh singer who has an umbilical cord to a Kazakh singer with a lyrical and coloratura soprano, Bibigul Akhmetovna Tulegenova, was born in the Semey region. She was born on Sovetskaya Street. Now it is considered a home bowling center. Her ancestors are from the Abyraly District. Apparently, his parents took refuge in Alasha during the famine. Akhmet, the father of the famous singer, graduated from the University of Marxism-Leninism in Almaty in 1935. Then, he was sent to work as the secretary of the Katon-Karagai Regional Party Committee. In October of 1937, he was arrested and accused of being the “Enemy of the people”. His wife and five or six children had returned to Semipalatinsk. Moreover, they went through insults they had never experienced. They didn't call themselves children of the “Enemy of the people”. Every step was monitored there. Then the Second World War began...

Bibigul Tulegenova was encouraged to finish the 7 grades of the evening school. Having contracted brucellosis while working at the meat processing plant, she had to work instead. Therefore, Bibigul, who had not lost her neck yet, began working at the age of thirteen. She originally worked at the lumber factory that made boxes for the sausages and canned goods. That must have been in 1943. Then, by the grace of God, she was hired as an assistant to the cameraman at a local club. But she could not have stayed there for a long time and returned to the meat processing plant. The interest of the future star in the field of art had probably begun at that time in the amateur circle. Moreover, when she went to study in Almaty in 1948, she worked as an unskilled laborer at the meat processing plant in Semipalatinsk.

How did Bibigul get an offer from the conservatory in Almaty? Of course, not on her own initiative. Because at that time, the road of the daughter of the "enemy of the people" was closed somewhere. However, admiring the art of the boy who sang and danced in an amateur circle, the management decided to send him to one of the singing contests in Almaty in May of 1948. So, she took a labor train to the distant capital. “Where do they go in order, where do they end?” A child enthusiastically counted the poles along the way and reached her desired destination. But at that moment, she did not even notice that she was feeling cold in a cold car and she had a sore throat. Okay, when she left for Almaty, there was no voice. The adults encouraged her and brought her to the doctor of the music school. Then, the doctor said, “The child has a bad cold”. She should take a break this year. You need to clear her throat. “You will come next year”, she answered. She will have to go back in time. Fortunately, in the same year, amateur competitions began in all parts of the country. First of all, the competition was held in the district, then in the city, and the last one was carried out in the region... And then, Bibigul started getting invitations one by one.

Bibigul Akhmetkyzy recalled the same starry moment: “Regional competition was held in the Semey region”. I sang the song “Kazakh waltz”. In addition, I sang several more songs. I don’t remember many of them. During the contest, a beautiful woman came up to me with a smile. “What’s your name?” – she asked in Russian. I answered, “Galya”. I grew up among the Russians in Semey. Most of the people called me Galya. “My name is also Galya”. “Let's meet and get to know each other”, – said the stranger. It turned out that her destiny was similar to mine. She was chased and insulted, and had been imprisoned in Kolyma for 10 years. Later, I learned that the author was Galina Serebryakova. It seems she wrote a book about Karl Marx. “You have such a good voice”, – she said. Then, she told me the names of the Italian opera singers. I never knew or heard about them. Later, I learned that all of them were the famous singers. “The tone of your voice is similar to theirs”. My child, you need to learn. “We must visit the conservatory”. “Will I return to the conservatory? I work at the cannery factory”. He smiled. “There is common labor at the cannery”. The conservatory is a place where you can nurture and educate children as talented and gifted as you. I will have taught you for about a year. Then you will go to Moscow. I stayed in Almaty and am now thinking about Moscow".

Moreover, the man she met unexpectedly taught the young artist what she already knew. He taught me to sing, make affirmations, and meditate richly. Due to this, the singer was sent to the Republican Amateur Olympiad in Almaty. At that time, there was a theater in the capital at the intersection of Abylai Khan and Kabanbai Batyr Streets. Amateurs from all over the world have started to try the garden there. Accordingly, it was well received. Our Bibigul also sang on various instruments and was satisfied with her artists that came to meet her at the break.

The final concert was held at the Opera House. Bibigul Tulegenova performed the composition of “Spring Waltz” by Strauss. The audience lost consciousness. After this contest, Tulegenova was admitted to the preparatory course of the conservatory.

The first impression of our hero, who went to the Semey region, received a blessing from her mother, and in autumn returned to Almaty. It also has a beautiful story. Returning to those unforgettable days, “I got off the train and took the tram to Shevchenko Street. Autumn was coming. When I walked along the street, I saw a lot of apples and horse-drawn carts. There was also a raspberry color. The smell broke my nose. I only saw the potatoes in Semipalatinsk. I was amazed by this scene. That year, the growth of the Oporto apple tree was really remarkable. It is not pleasant to see the apples sold on the market! My heart was melting. What an abundance this is. Why did it spill on the ground? In Semipalatinsk, where we ate a bunch and a few portions of green apples, we really missed this scene. I have no idea where those apples are now!” – recalled the singer.

Bibigul got married while she was pursuing her education at the preparatory school. When the mother heard this, she was very upset and angry about her daughter and did not answer any of her letters. Tulegenova, who entered the conservatory after completing her preparatory course, gave birth to her first daughter in the winter of the same year. However, she didn't have the opportunity to stay at home for months and years with the child. As soon as she left the maternity home, she immediately returned to school. Probably because of such a tedious and difficult life, one day the voice of the singer was not heard at all. Then the teacher nurtured her and brought her to the rector. The rector was the famous composer Akhmet Zhubanov.

— “This girl has no voice”. “She was not suitable for reading”, – said the teacher. Many other strange accusations were made against her student. At this point, Bibigul became impatient and said:

– Sorry, if I went too far! I had a voice when I came here. What happened to that voice? “You're responsible”, – the teacher asked.

— “Soviet women have the right to study, get an education, get married and have children as well”, – she said.

— “You are right. You are correct. But it will not happen here. You should go to another institute”, — said the teacher.

— “What to do now? How are you going to return to Semey?” Here, Maksutbek Mayshekin comes to my mind. Last year, I met him at the republican competition for amateur art. He said he was working for the radio.

— “Listen, if you want to sing, talk to me. It’s my phone”, – he said. Bibigul beat him up and approached him. So, currently they are starting to sing on the radio...

In 1949, the second wave of repression had begun. The academician and writer Mukhtar Auezov fled to Moscow. Akhmet Zhubanov was stripped of his rank and persecuted for being a “Cosmopolitan”. A capricious teacher from Bibigul was also involved in this campaign. He was fired. However, in the autumn of the same year, People’s Artist of the Kazakh SSR Nadezhda Samyshina, who replaced the previous teacher, had the following conversation with a student of Tulegenova:

- “It has been six months since I don’t have a voice”.

— “How old were you when you got married?”

— She is five months old.

After that, a good teacher, who has a lot of life experience and respects the field of art, immediately took care of the talented student. Bibigul was supposed to get a voice diet. She sang only the soft songs that were played on the radio. She took an exemption from the exam. He regained his voice within a year.

Bibigul Tulegenova, who has brought the Kazakh singing art to a high level for a long time, seems to have the only unfulfilled dream. A famous composer, People’s Artist of the Kazakh SSR, Latif Hamidi, said: “I want you to create an image of Azhar in “Abai”. I just wanted to make a video”.

— “However, I memorized his words and left when I was ready”. I could not say, “Sorry”, — the singer said.

Then a famous singer, Bibigul Tulegenova, regretted that she did not keep a diary of her work as a People’s Artist of the USSR.