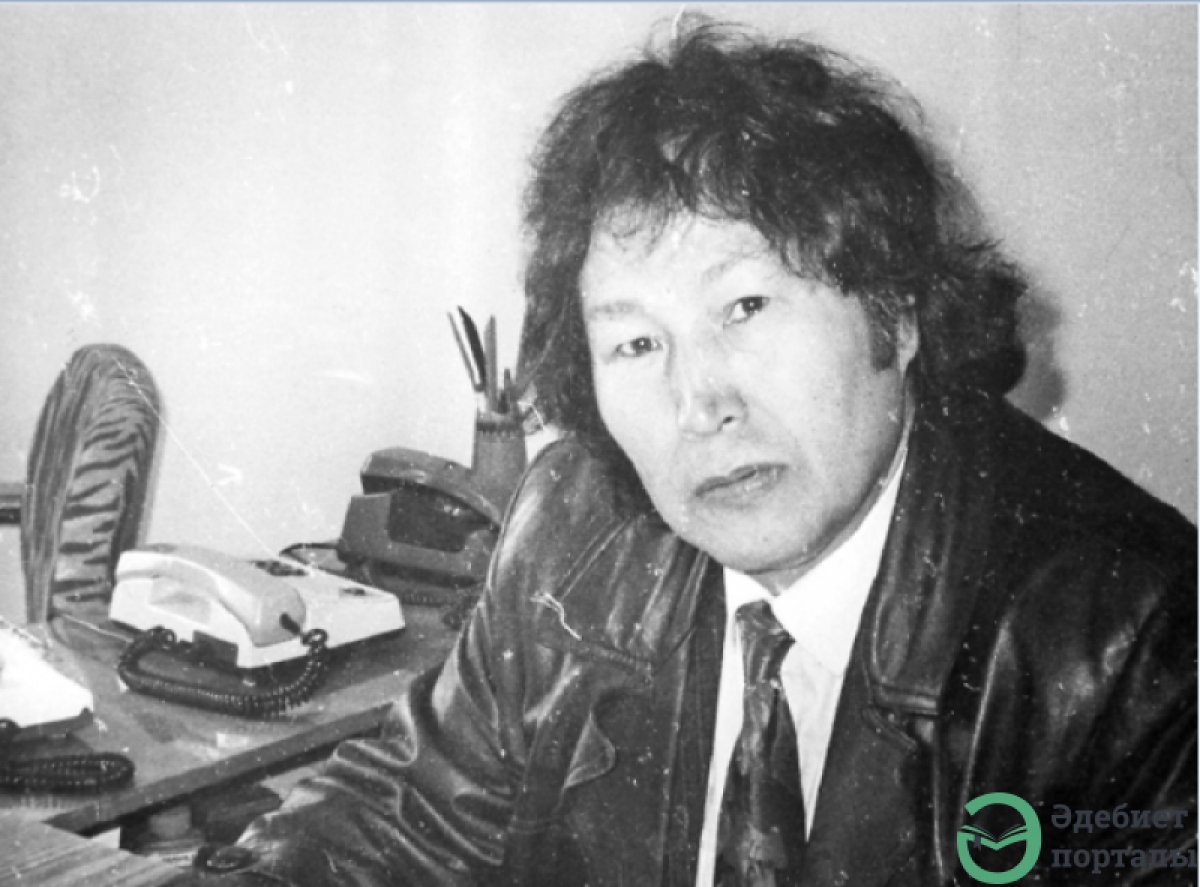 Altai. Shyngystai. Oralkhan's youth was considered the fifties and sixties of the last century. It has been a post-war turbulent time. At that time, 6-7 children wore one butterfly to school before noon and one in the afternoon. The boy who was going to the second shift had been waiting for the butterfly. There is something to hide, because there was no straight suit to wear for graduation in those years. Oralkhan's condition was not good either. It's time to be satisfied with a foot of black soup and a slice of bread. It's no secret that they didn't wear the full pants until the 60s and 70s. He always wore patched trousers. There is no name for the bag. Four or five children, followed by Oralkhan, went to school with a cloth bag. The country lived in such conditions. Oralkhan Bokeev was the only son among four girls in the aksakal's family. He had started working early and grew up early too. During the summer and spring vacations, he helped adults and prepared the fodder. He went to the cattle farms, saw the snow, and thought. In the spring, he went to the Shabanbay pasture to mow the grass. Oralkhan even sat on the mower behind the tractor for a year. He had done very hard and dangerous work. He rode a horse and cut a lot of grass.

In the Shyngystai village, there was an old club. Young people went there in the evening. At that time, it was not called a disco, it was just a dance. A boy from the village was playing the harmonica. The rest of the people just danced to it. Oralkhan has been tenacious and courageous since his childhood. He had such a lazy character. He was quick to the rage and fast to apologize. In short, his character is like lightning. There is one incident that comes to mind. A group of children go to the village to gather under the canopy. Suddenly, a blackbird came out of the thicket! When they came out, all the children were terrified and ran away. And, Oralkhan's courage was so lonely that he went into the thicket, took a stick in his hand, and ran against the creature...

Oralkhan Bokeev was a great waltz dancer. He also danced to the beat. He didn't even dance with any girls. He also had his own beautiful, eye-catching beauties. Another hobby of the writer was swimming in the water. He could move freely from one side of Bukhtarma to the other.

The children of the village went to Shyngystai`s school in 1907, where Abdykerim cut down a pine tree. This was one of the richest educational institutions not only in the district but also in the region and the country, with a rich history. Oralkhan was not interested in Kazakh literature or the Kazakh language. He had a teacher named Nurgazin Zhomart. As a child, Oralkhan had a good relationship with him and asked him the question, “What is winter?” He wrote a poem and decided to become a poet. Yes, as a child, he often said that he would like to become a poet someday.

When the writer was a child, he read a lot of books, especially fairy tales. He read everything from the poem “Alpamys Batyr”, until he managed to read the works by Ilyas Zhansugurov and Saken Seifullin. Back then, the books were hard to find. There was a small library in the village. His contemporaries said that Oralkhan read all the books there. And he used to read the stories in a selective way. There was no choice then. The book was small. Good. Oralkhan read a book while other children were playing outside.

The boy, Oralkhan, was called “Presumptuous” by his friends. because he did not speak correctly with the person he did not like. He has a habit of giving negative answers and sarcasm. Another feature of his speech was his eloquence and dismountable words. Oralkhan would come out when people were speechless. Although his father did not speak much, his mother, Kuliya, was known to all the Genghis Khans. She was a fiery and eloquent woman. Oralkhan's mother's eloquence might have attracted him as well.

We know that Oralkhan Bokeev was not only neat in literature and prose, but he was a very clean person in life too, because he had had these skills since his childhood. Oralkhan tried to hide his old clothes, even if they were old ones, by washing them and putting them on. His haircut itself was special. When he moved to the 8th grade, his hair grew up. Even then, he was able to recover and was able to stay clean. He took good care of himself. In this case, his childhood friends compared him to Saken Seifullin.

A Russian woman named Greshke, who had one daughter, Marusya, lived on the other side of the Bukhtarma River. She and Oralkhan are about the same age. On one side, the neighbor stood. While Bukhtarma was sniffing and carrying him to the top of a tree, Oralkhan and his Russian friend crossed the icy water to the island and picked the flowers. One of the characters of the writer's life is that when he was young, he was alone, thinking for a long time with his head down on the water's edge.

Oralkhan had begun to approve of his interest in literature since school. But it is difficult to say that there was someone who saw him and did not help him. He read more literary books than he took lessons. He was asked the question, "Why do you read a lot of literary books without studying?! There were also peers who were offended there. He easily mastered speaking lessons. He did not study mathematics and physics much, because he just wanted to get grades. His subject teachers urged him to open up. It seems that the teachers of that time did not pay attention to the education of the students in accordance with their preferences. All students are taught to the same requirements. In this way, he encountered conflicts with students. Oralkhan had also faced similar difficulties. At that time, his teachers did not understand why he did not fulfill the requirement to prepare only for lessons not to read the literary works.

In addition, Oralkhan has been prone to figurative speech since he was a student. He spoke openly about the negative actions of his comrades and pinched them with words. One day during a class, Turysbek's teacher began to explain why he could not prepare for class. Before the teacher could listen to him, Oralkhan smiled and looked at the teacher. There was a student in the class named Kalibek. He died later. At the class meeting, the students saw that Kalibek was smoking. “All the actions of high school students are repeated by low school students. If you knew that it was bad for your school, you wouldn't have smoked”, Oralkhan said. According to the teacher, the effect of these equations of Oralkhan was stronger. These phrases would come and go by themselves.

At the same time, he was very thoughtful and imaginative. Before he started the lesson, he smiled and said, “Let me light a fire for you and make a noise like a bird”. As he had previously stated, he whispered immediately. He considered himself superior to others. It was as if others were watching from the roof. Furthermore, the breadth of his mind made him different and unique from others.

Similar articles
#ESSAY
Some excerpts from the life of the famous doctor Akkagaz Doszhanova
2514
#ESSAY
Some passages about how Bibigul Tulegenova came into the field of art with a nightingale in her throat
2868
#ESSAY
“Zhanibek sings, Akseleu admires”
1119