The book of the prominent Qazaq political figure, writer, literary critic, diplomat Olzhas Suleimenov "The Code of the Word: An Introduction to the Universal Etymological Dictionary 1001 Words" was published in English. Fans of his talent, as well as people who are interested in this work can get acquainted with it on international readers' sites. 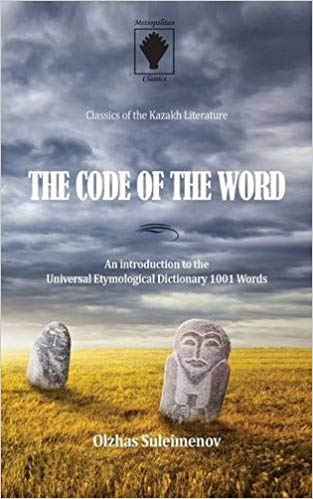 "The Code of the Word" is considered to be a preface to the Universal Etymological Dictionary “1001 Words”. The author devoted a significant part of his life to write this work. According to the author, "The Code of the Word" is a luminous exposition of the effective etymology method, in other words, explanation of the origin of the word developed by him during the last 50 years of his life.

In a small book (85 pages in total), the author shows a new method of etymology developed by him, based on the results of decoding the word genome. With the help of this method Olzhas Suleimenov examins the origin of the first words of humanity, which exist in all modern languages of the world. The author defines the purpose and the main essence of this work as follows: "The oral word has advantages over a written document, its phenomenon is underrated by science. It will never get burnt, it will never get damp. It can not be edited or rewritten to please "the Temple and the Palace". It does not get old. An ethnos can get off the historical arena, disappear. But its words are preserved in other languages. Dictionaries are the most timeless and reliable archive of true historical information. They will be available to us if we finally find a golden key to the Word. It will reveal to us the mystery of the origin of the Word and the Script, and hence of the Language. A book „The Code of the Word" gives us the coveted golden key. Awareness of the interdependence of the Word and the Sign is that coveted golden key to the mystery.

"The Code of the Word" of Olzhas Suleimenov is not only an introduction, but also a detailed instruction on a creation and use of a new etymological dictionary. The author of this foreword examines not a certain language, but signs that are the primary sources of all cultures and scripts of the Ancient World. In order to identify the relationship of the languages of different nations, it is not enough to use methods of phonetic correspondences, which linguists have been using for the last two centuries. According to Olzhas Suleimenov, this method can not help the researcher to tear the vitals out of a subject, but only covers the uppermost layers of the word's history. The author of the book in turn acquaints us with the theory, where the origin of the word is interrelated and dependent on the figurative written sign (the first character), due to which it is possible to learn the genesis of any ancient consonance. The book is divided into small 47 chapters, which are logically and sequentially connected with each other. It is easy to establish the relationship between "The Code of the Word" and the other well-known book of Olzhas Suleimenov "Az and Ya", in the second part of which, called "Sumer-name", the poet-researcher gives 60 Turkisms that were discovered in the Sumerian "clay books". In several chapters of "The Code of the Word", such as "Back in Sumer?", "The Sumerian arrow is still in flight (about the Great and Humiliated)", "The Man with an arrow who is in Sumer", Olzhas Suleimenov continues the search for Turkic correspondences in modern languages of the world.

At the forefront of his scientific research Olzhas Suleimenov puts a sign-symbol. If we return to the history of the origin and formation of mankind, we note that for all ancient peoples it was one. It is well known that representatives of the Ancient Civilization worshiped Nature. Also, such private concepts as "Moon worship", "Sun worship", worship of the sacred animal to the ox, lion, bull, elephant existed at Ancient times. Rock paintings with animal images, in particular the "animal gallery" of the Tamgaly tract in Qazaqstan proves this fact. The author of "The Code of the Word", taking as a basis these written sources, describes them in detail not only on the onomatopoeic stage, but also on the sign imitating language stage.

"The initial stage of language development was, undoubtedly, onomatopoeic. During this long period, a man who differed from other brothers in the nature with his artistic gift - the ability to imitate and transform himself, mastering the self-names of "talking" animals, developed his speech apparatus, which initially could be supposed to reproduce only the limited sounding with which he came to this world. But here, learning the self-names of other species, our ancestors learned how to roar, hiss, quack, moo, meow ... that is, when calling other animals, a man created his first words. " - argues the author of the book.

Designed by Olzhas Suleimenov and being in active use the mechanism of word production, at first glance is simple, but at the same time it is consistently deepening into the semantics of the word, hermeneutics and requiring from the researcher a new, not traditional attitude to the Word: Sign + name of the sign + interpretation of the sign = word - concept.

"The Code of the Word" is a result of research, which includes a moral, aesthetic, humanistic meaning. The book has a great social and political significance, it acquaints readers with the origin and history of the languages of all people, existing in this world. So far as the book "The Code of the Word" is a preface to the Universal Etymological Dictionary „1001 Words”, it is freely available on the official website: olzhas1001.com, which works in Qazaq, Russian, English, French languages.

The main goal of the organizers of the web-site and Olzhas Suleimenov is to inform people, particularly the students about this idea, to acquaint them with the origin of the first words of humanity. The feedback is also not forgotten: readers can share their experience in solving problems in the field of etymology in favor of human history.

The creative activity of Olzhas Suleimenov has attracted attention of not only linguists, but also literary critics for several decades. His creative motto is "To Raise the Steppe, Not Lowering the Mountains Pride".

The writer worked hard during the next years. A poetic collection "Sunny Nights" appeared in 1962. Later on were published "Parisian Night", "Good Sunrise Time", "Year of the Monkey", "Selected Lyrics", "A Clay Book","Repeating at Noon","Every Day is Morning", "A Round Star", "A Fire Transformation", "Defining the Shore", "Az and Ya","A Language of Writing".

Olzhas Suleimenov is known as the author of works devoted to "The Tale of Igor's Campaign". He got interested in this topic in 1960. Being a student of the Literary Institute, he published his first works about this epic poem starting from 1962. The general line of Olzhas Suleimenov's work in this direction is identification in "The Tale of Igor's Campaign" the vast layers of Turkic vocabulary and Turkic phrases, later on sophisticated during rewriting. The result of this research work is reflected in his popular book "Az and Ya" (1975).

Olzhas Suleimenov passionately took part in life of two significant creative unions of Qazaqstan - the Union of Writers and the Union of Cinematographers. Thanks to his input Qazaq cinema has become more popular around the world. The film studio "Qazaqfilm" produced such remarkable films as "Qyz-Zhibek", "Anxious morning", "A shot on the pass Qarash". On the initiative of Olzhas Suleimenov Almaty became a host of the Fifth Conference of Writers from Asian and African States.

Olzhas Suleimenov played a key role in closure of the Semey polygon. He founded a movement "Nevada-Semey", which allowed to establish a moratorium on explosions at the Semipalatinsk test site. On August 28, 1991 a momentous event at last took place. The President of Qazaqstan Nursultan Nazarbayev signed a Special Decree on Closure of the Semey Polygon.

By present time Olzhas Suleymenov represents Qazaqstan on a high level, being a Permanent Representative of Qazaqstan to UNESCO (Paris).

Aizhan Abilda
Теги: olzhas suleimenov, the code of the word