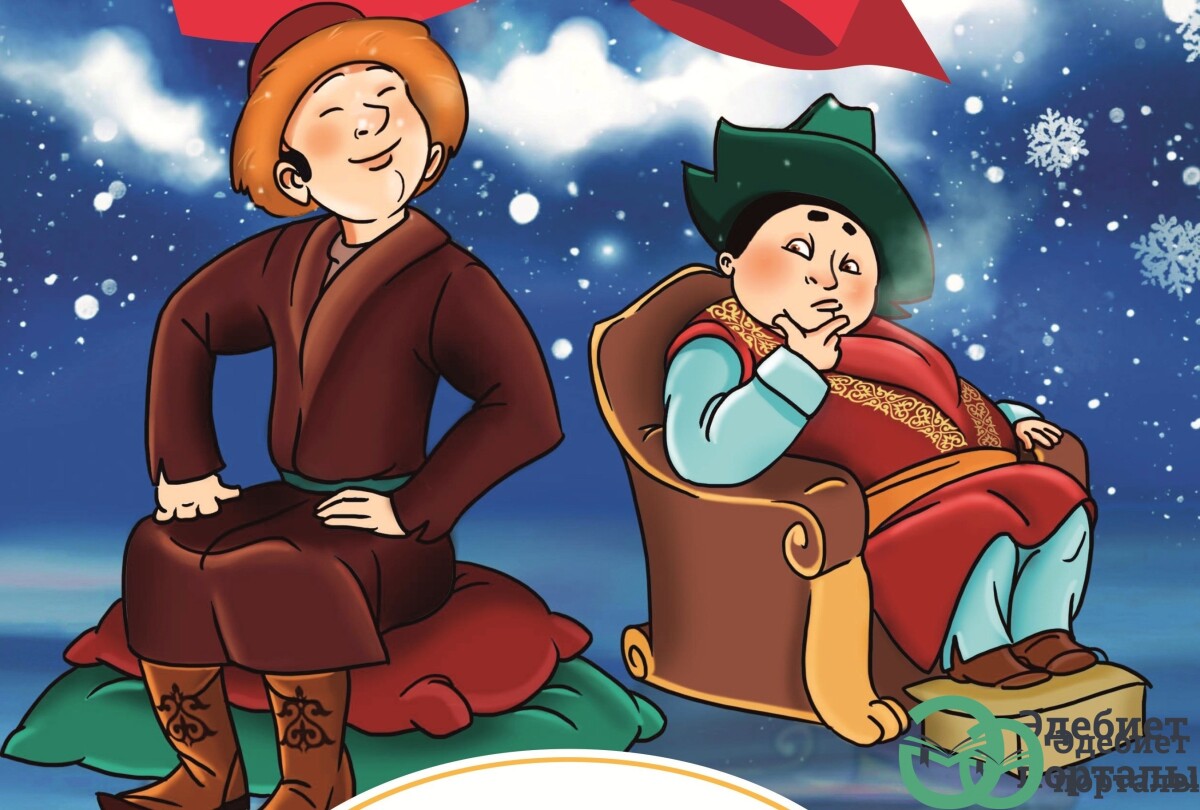 Once upon a time, in the ancient times, there was a king with a goat's tail. He only had a son. He fell seriously ill and died. His only son was burned, and the king did not go outside. Several kings visited the king in order to express their condolences, but he still did not get up. When the king did not rule, the people became very sad. There are three orphans in this country who have no relatives, parents and siblings. The three of them decided to go to the king, thinking, “If we ask the king for the mercy, he will come back”. They tell their people, “If we go and ask for the condolences, they will come back”. And the people said, “Shall not the three of you, who are greater than you, come and offer their condolences?” - they said. Of course, at that time, even if he saw an orphan or a widow, he would not be noticed. The three of them returned to the village crying on that day. The next day, the three of them consulted and decided to go to the king's palace with their faces. A guard in front of me would not let me go. They will stay here. The guards go and tell the king. After the boy said, “Bring the king what he has to do”. So the three of them go. Then the king said, “Well, tell me what you are doing”. One of the three stands up and says:

– Yes, we have an argument. “Tell me, what is the controversy?” says the king. A boy pointed to one of them and said: “Someone has put the gold somewhere. He was taken away from where he was buried. “It is still a question of whether it's the boy who put the gold, or the boy who took the gold”. The king said, “Of course it belongs to the boy”. The boy stood up and asked, “Was it considered as the gold?”

– So, God had put the child in this world, that means, he created him, and you took him. But he does not belong to you, he belongs to God. Being sad, why don't you get out of the bed? - Three of them have expressed their condolences. Then the king got up and regained his composure. The king summoned his vassals, dismissed them, and placed three orphans in their places. And now let them be the leaders. Let's go back to the old masters. Unable to see that the three orphans were the vassals, the king decided to go on the campaign with his former and last vassals, while they were agitating for the country, crushing the rocks, destroying the country and many parts of the city. While he was walking, he saw two birds of prey at one turn. One of them was thinking, and the other one was sitting on the edge. The three orphans used to say, “We know the language of birds”. It turns out that the mothers know it. They said to the king, “These three sons of yours, whom you have just chosen, would tell us that we know the language of birds, and if they do, ask one of them, who is thinking out there, and who is the other one sitting in the field?”. He sent one of them to talk to Baigyz. He dismounted, grabbed his horse's lips again, and rode back to catch up. The Mothers asked, “Why is the one thinking out there and the other one sitting in the field?”- they said. Then the boy said:

– That one who was thinking had an only son, and another one who was sitting in the field had a daughter, and they were discussing about the cattle. That one who has a son tells to the one with the daughter, “Give your daughter to my son”. Then he said, “How many cattles will you give?” That one with the son said, “I will give you the thirty pieces of gold”. Another one with the daughter said, “Then I will not give you my daughter, because I have thirty gold of coins, give me more”, and the boy could not finish. Then the king stood up and said, “My people are considered as the corrupts”. So they went for a walk and spread out in the evening. By the evening, the king worn the bad clothes, went out to see the city, and when he looked around, he saw that half of the city that was in ruins. The next day, the three orphans were released from the ministry, saying, “Goodbye, children, the country and city is ruined, you are supposed to find everything you need”. Let the children take care of themselves. Now let's go to the city. The former ministers were re-elected, and the king did not hesitate to lie down and say to his servants, “Bring them!” he said. “If you don't bring it in three days, I'll cut off your head”, he said.

Not knowing what to bring, they consulted and said, “These three orphans were smart, let's look for them”. So two days later, the three of them were found on the third day. When they came, they were greeting the children. All three of them greeted him and said, “Goodbye, bye. Where are you going?” – he asked. Then they answered. “We are looking for you. Because we were going to die, the king gave us time. He lay down, shaking his head, and said, “We don`t have his name, bring it!” “We don't know what to bring, so we were given three days. It will end today”, he said. “That's right, the city is ruined, so bring a carpenter to fix it!” At the same time, he went back and took some carpenters there. The king said, “Well, have you not found a carpenter for three days? Why are you late, tell the truth!” Then the mothers stood up and said:

Not knowing what to bring, we asked the three children. “Are you satisfied with your intelligence?” said the king.

“Thank you, put those three”, he said. “Yes, or bring it”, he said, and re-elected the governor. A few days later, protests erupted in his country, saying, “We will not elect an orphan”, and when the country collapsed, the three of them were released there. So the three of them visited the another king, who has no mountain to go to and no place to go. The three of them wanted to make a living by taking gold from the king's treasury. Their house was a hole in the grave. During the night, the three of them carried three sacks of gold from the king's treasury to the tomb. In the morning, when he looked at the king's treasure, he saw that the gold had run out. The next day, they set up their guards. However, that day the three of them stole the gold and brought it to the grave without telling anyone. The next day the king looked at him and saw that he had become less and less. The king was upset and became a guard. The three of them stole the gold from the treasury without telling the king. In the morning, when he looked at the treasure, he saw that there was some gold left. The king was sad that night. He was dressed that night too. He wore bad clothes and went out at night. The king followed him immediately. The children ask the man, “Where are you going?” The man asked from them, “Where are you going?” – he said. All three said “We require the bread”. The man said, “I want bread, too”. As he was walking towards the tomb, the dog stopped barking, and then one of the three stood up and said, “Are you a king? That dog is barking at me, saying that the king is leaving”. He said, “No, my dear, let me have a kingdom, but when I was a child, when we were playing on our own, the children used to play with me as a king”. They really believed to this. The three and four of them come to the house where the man was buried. In a simple conversation, the man told the three of them to find out how to do it by different methods in different words:

– “Oh, man, were you not the man of the night?” Where do you mean to save a dying man from the death, save him, here we are, dying, he said. So the king released him and rescued him. So he took all three of them with him.