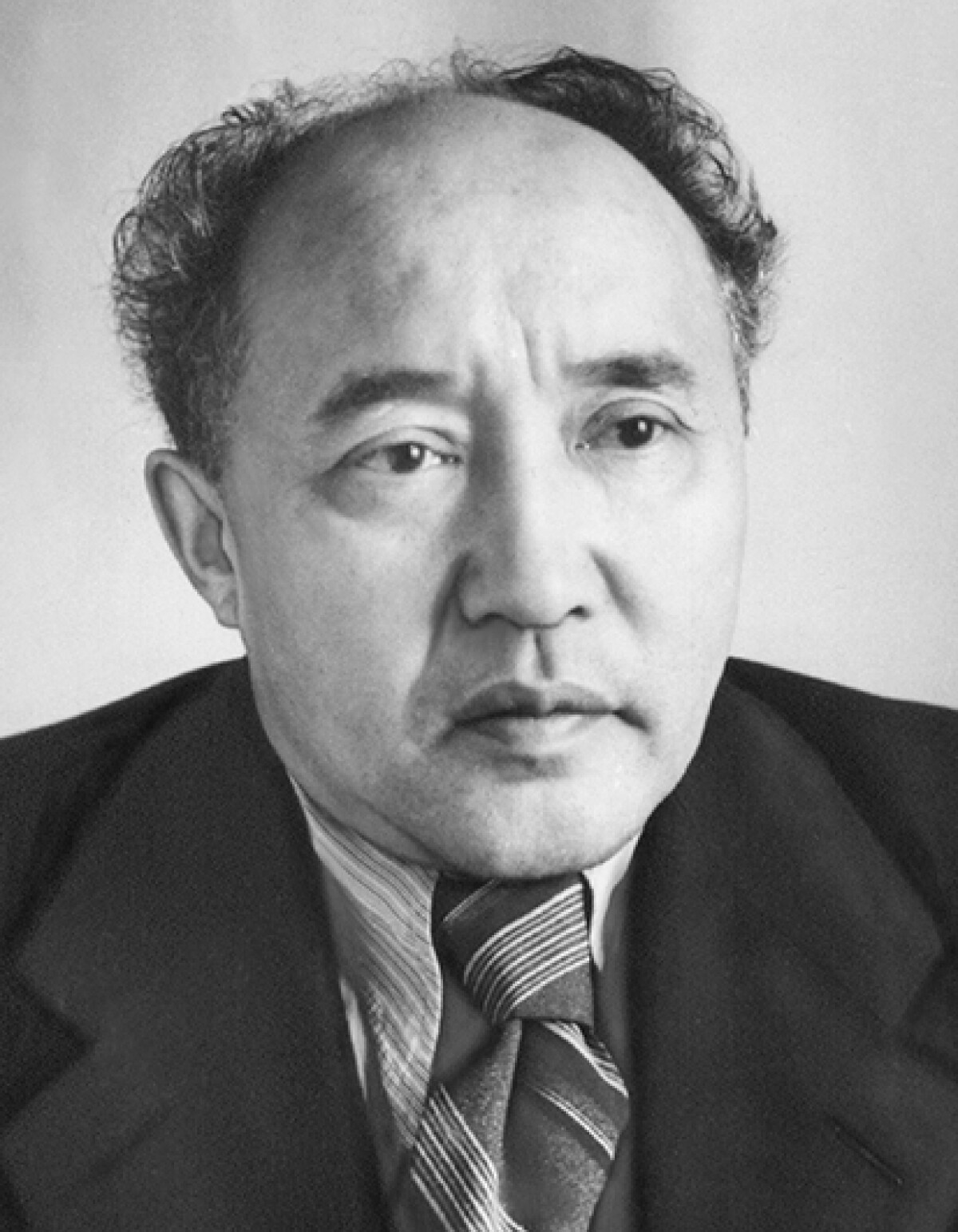 Biography
Books
About author
Mukhtar Auezov was a Kazakh writer, a social activist, a Doctor of Philology, a professor and honored academic of the Soviet Union(1946). He was born on September 28, 1897 in the old town of Semei in Kaskabulak, where he spent all his childhood.
He grew up under the spiritual influence of the poet Abai. His father and grandfather Omarkhan Auez both highly revered the poet, a neighbor and friend of the family. His grandfather was a storyteller of folk tales, and taught his grandson to read and write, he also instilled within Mukhtar a love of literature, and the poetry of Abai.
Auezov was born into a nomadic family from what is today Abay District, in East Kazakhstan Province. His grandfather taught him to read and write. Auezov was then educated at the Semipalatinsk Teacher's Seminary and Leningrad State University.
Auezov is best known for his plays. The first play he authored was Enlik-Kebek, a story of two young lovers which bears a great resemblance to Romeo and Juliet. He authored more than twenty plays which dealt with issues relevant to Socialism in Kazakhstan.
After writing plays, Auezov changed his focus to writing novels. Two novels - Abay and The Path of Abay - dealing with the life of Kazakh poet Abay Qunanbayuli were the product of the last twenty years of his life.
Auezov's other projects included drawing and translating literature into the Kazakh language. Some translations made by him include Nikolai Gogol's The Government Inspector and Shakespeare's The Taming of the Shrew.
Mukhtar first studied in Kaskabulak, then later a Muslim madrasa in Semipalatinsk. At age of eleven he moved to a nearby, five year grammar school. Mukhtar was extremely diligent and curious student who was respected by classmates and teachers.
His father Omarkhan died in 1900, and his mother Nurzhamal in 1912. The young Mukhtar was raised by his uncle Kasymbek and his grandfather Auez and grandmother Dinas. In 1907, after a year of study in the madrasa, he was sent to the large Russian school in Semipalatinsk.
Mukhtar Auezov attended the Semipalatinsk Pedagogical Seminary after graduating from the City College. In the 1912-1913 academic year, Mukhtar finished the first seminary class with an award, and went on to complete his studies at the Semipalatinsk Seminary in 1919. Around this time he began his acquaintance with Russian and other foreign classics of literature. At the same time Auezov wrotes short stories, poems and articles that are began to be published.
The young Auezov, according to the testimonies of the pedagogues, was marked for his impeccable attention, extraordinary gifts, slim build and aristocratic slef-belief. He was an extraordinary sportsman and represented “Yarysh F C”, which at the time was the best football team in the city.
Mukhtar Auezov joined the faculty of a large state school, and he also worked holding various positions in the local government in Semipalatinsk with the Kazakh Central Executive Committee and in Orenburg.
In the summer of 1917 year Auezov married a 15-year-old girl named Raihan. Together they had a daughter born in 1918 who they named Mugamilya (she lived until 2009), and a year later in 1919 a son (who died in infancy). In 1920 Auezov divorced.
In 1928 Mukhtar Auezov graduated from the Philological Faculty of Leningrad State University, and completed his PhD at the University of Tashkent. During the 1930s his fruitful activities as a professional writer began to take off. He traveled around the world, meeting new people, and exploring life.
Mukhtar Auezov died during an operation in Moscow on 27 June 1961. He was buried in the Central Cemetery, Almaty on his grave there stands a bust created by Yevgeny_Vuchetich.

Auezov with his creativity rose to the highest level within Kazakh literature. His writings belong to different genres, he wrote numerous essays, short stories, and plays (many translated into other languages,) published many informative articles and gave lectures, wrote and published books, lectured at universities.

In 1917 while he was studying at seminary he wrote “Enilik-Kebek a play based on folk legends. The Enilik-Kebek play and the story Korgansyzdyn kuni, which was written in 1921 demonstrated to the world his great talent as a writer. From 1923 he began to devote all his energy to the literary arts and to work productively. In the period 1923-1926 he authored stories such as Okygan azamat, Kyr suretteri, Uilenu, Eskilik kolenkesinde, Kinamshil boizhetken, Karaly sulu.

During the period 1923–1928 years he studied and then graduated from Leningrad University in the Faculty of Language and Literature. During the last two years of his studis In Leningrad (St. Petersburg), he wrote two highly acclaimed novels: Karash-karash and Kokserek.

In 1936 he published a piece of prose called Tatiananyn kyrdagy ani in the Kazakh press Kazak adebieti, that was section from the future novel of the same name. Some years after that(around 1940), with the cooperation of Leonid Sobolev, he wrote the Abai tragedy . The great scientist and teacher, Auezov, worked on the history of Kazakhs literature, and the training of personnel. He was the founder of the Abai studies, and the principal author and editor of the multivolume Kazak adebiet Tarihy. He also wrote a monograph on the Kyrgyz epic Manas.

After the Abai Joly epic, he began writing a new, large-scale epic that described a new era in the future. His first book of that period is called Osken orken and was first published posthumously in 1962. A period of blooming of Kazakh drama is associated with the works of Auezov. He wrote over twenty plays, and translated such classic works of world and Russian drama as The Inspector by Gogol, Othello and The Taming of the Shrew 'by Shakespeare, Aristocrats by Nikolai Pogodin, Spring Love by Konstantin Trenyov, and Officer of the Navy by A. Kron.

In 1960, together with a group of Soviet writers, he visited the USA. In the summer of 1960 he started work on the series of essays named “The American Impressions”. From mid-summer 1960, he began work on the novel named “The Young Tribe”. In March 1961, Auezov embarked on a visit to India that included participation in the work of the III International Congress for Peace in Delhi together with a delegation headed by Nikolai Tikhonov. In June of that same year he planned to visit England, the land of Shakespeare, but his untimely death meant that his wish to travel to England did not occur. On June 3, 1961 he travelled to Moscow for medical tests. On June 27, 1961 – his heart failed during a surgical operation.

The first 20 years of life of M.Auezov resemble the childhood, adolescence and youth of his favorite poet and spiritual guide - Abai. Subsequently, in a famous epic, he described the same steppe, the same village, and the same social environment as experienced by Abai.

In his formative years, Mukhtar listened to the memories of his grandfather that told of Abai and Kunanbay. The destiny of Mukhtar Auezov was linked by many threads to the life of Abai the hero great inspiration of his life. Abai himself graced family celebrations, arranged for Auez to mark the birth of his grandson. Nurganym, one of the wives of Kunanbai father of Abai, was the sister of Auez.

Mukhtar later became friends with the son of Abai Turagulom and married Camille, granddaughter of the great poet, that is the daughter of Magauov. Auezov met Dilda, the first wife of Abai with whom he received a great deal of information. More information about Abai was forthcoming from Eigerim another of Abai’s life partners who survived her husband for more than a decade.

Mukhtar Omarhanuly for 15 years wrote his famous four volume epic historical novel called Abai Joly. It was translated into Russian. In 1949 two books of the novel Abai received the first level award of the Union of Soviet Socialist Republics. This epic, which ended with four books, was awarded the Lenin prize. was translated into 30 languages, and received rave reviews from readers all over the world.

Abai Zholy is one of the most popular and valuable novels written by Mukhtar Auezov. The first book of the series was published in 1942 and after five years in 1947 “Abai” the second of the series was published, then came the third book in 1952 called “Abai aga” (Brother Abai). Finally fourth book was released in 1956. Later all of the books were repackaged and renamed as “Abai zholy” (The Path of Abai). First book and second books each have 7 chapters and one epilogue. Third book has 6 chapters as has the Fourth and one epilogue. The entire epic is divided into 20 short chapters each of which includes uniquely interesting situations.

Each chapter’s name precisely demonstrates the psychological state of the events within the story. If we compare there is much more drama, tragedy, sadness and sorrow than positive and happy moments. In first book we can clearly see how the young and inexperienced boy grows up and in the end of the fourth book we see how he became an adult and changed and who ultimately fails.