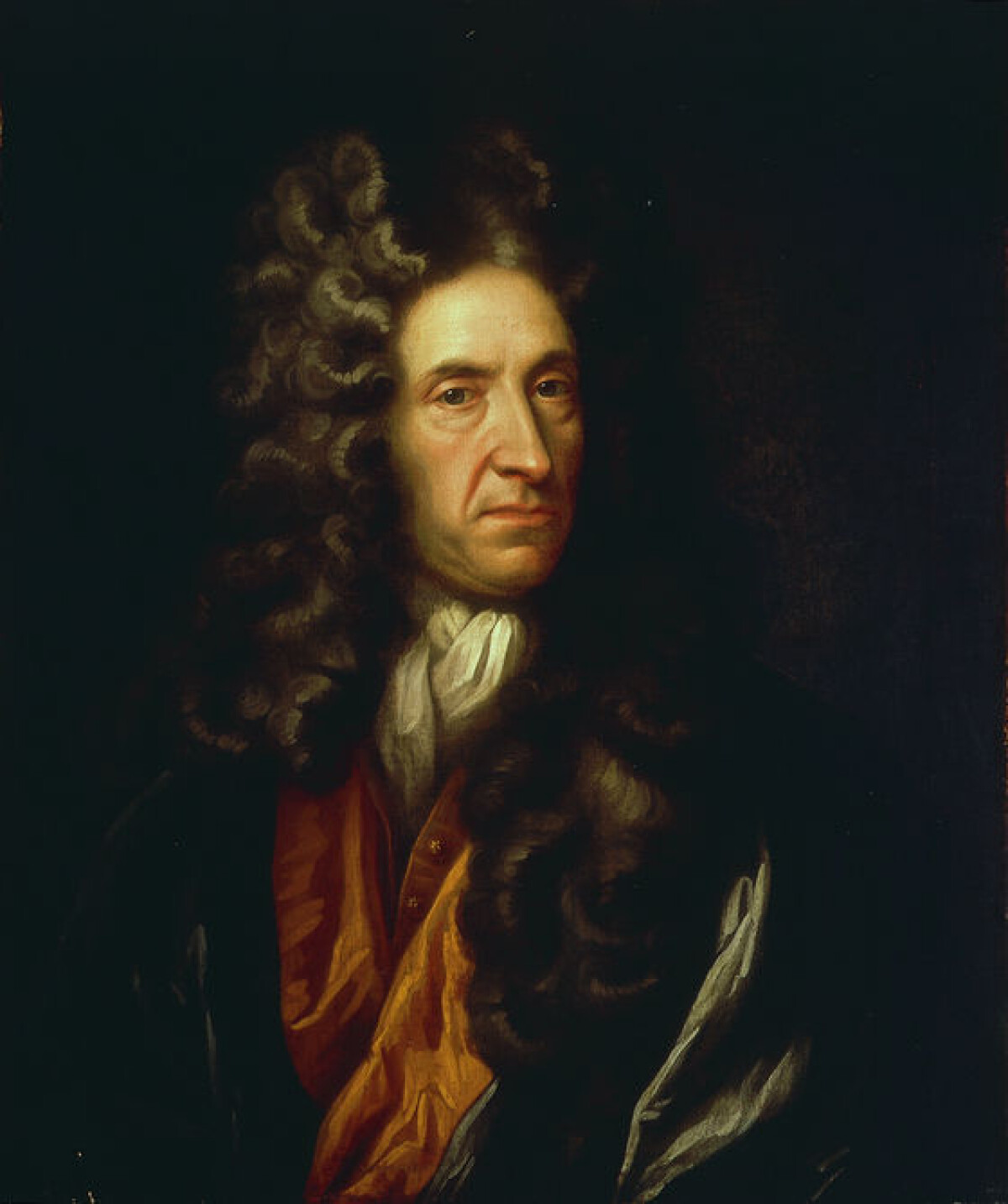 Daniel Defoe (1660 – 1731)  was an English trader, writer, journalist, pamphleteer, and spy, now most famous for his novel Robinson Crusoe. Defoe is notable for being one of the earliest proponents of the novel, as he helped to popularise the form in Britain, and, along with others such as Samuel Richardson, is among the founders of the English novel. A prolific and versatile writer, he wrote more than 500 books, pamphlets and journals on various topics (including politics, crime, religion, marriage, psychology and the supernatural). He was also a pioneer of economic journalism.

Daniel Foe (his original name) was probably born in the parish of St. Giles Cripplegate, London. Defoe later added the aristocratic-sounding De to his name and on occasion claimed descent from the family of De Beau Faux. His birthdate and birthplace are uncertain: sources offer dates of anywhere between 1659 to 1662; considered most likely to be 1660. His father, James Foe, was a prosperous tallow chandler and a member of the Butchers' Company. In Defoe's early life he experienced firsthand some of the most unusual occurrences in English history: in 1665, 70,000 were killed by the Great Plague of London and the Great Fire of London (1666) left standing only Defoe's and two other houses in his neighborhood. In 1667, when he was probably about 7, a Dutch fleet sailed up the Medway via the River Thames and attacked Chatham. His mother Annie had died by the time he was about 10.

Defoe was educated at the Rev. James Fisher's boarding school in Pixham Lane in Dorking, Surrey. As his parents were Presbyterian dissenters, at around the age of 14, he attended a dissenting academy at Newington Green in London run by Charles Morton and is believed to have attended the church there. During this period, the English government was often intolerant of those who chose to worship outside the Church of England.

Defoe's first notable publication was An Essay upon Projects, a series of proposals for social and economic improvement, published in 1697. From 1697 to 1698 he defended the right of King William III to a standing army during disarmament after the Treaty of Ryswick (1697) had ended the Nine Years' War (1688–97). His most successful poem, The True-Born Englishman (1701), defended the king against the perceived xenophobia of his enemies, satirising the English claim to racial purity. In 1701 Defoe, flanked by a guard of sixteen gentlemen of quality, presented the Legion's Memorial to the Speaker of the House of Commons, later his employer, Robert Harley. It demanded the release of the Kentish petitioners, who had asked Parliament to support the king in an imminent war against France.

The death of William III in 1702 once again created a political upheaval as the king was replaced by Queen Anne, who immediately began her offensive against Nonconformists. Defoe being a natural target, his pamphleteering and political activities resulted in his arrest and placement in a pillory on 31 July 1703, principally on account of his December 1702 pamphlet entitled The Shortest-Way with the Dissenters; Or, Proposals for the Establishment of the Church, purporting to argue for their extermination. In it he ruthlessly satirised both the High church Tories and those Dissenters who hypocritically practised so-called occasional conformity, such as his Stoke Newington neighbour Sir Thomas Abney. Though it was published anonymously, the true authorship was quickly discovered and Defoe was arrested. He was charged with seditious libel. After a trial at the Old Bailey in front of the notoriously sadistic judge Salathiel Lovell, Defoe was found guilty. Lovell sentenced him to a punitive fine, to public humiliation in a pillory, and to an indeterminate length of imprisonment which would only end upon the discharge of the punitive fine. According to legend, the publication of his poem Hymn to the Pillory caused his audience at the pillory to throw flowers instead of the customary harmful and noxious objects and to drink to his health. The historicity of this story is questioned by most scholars, although John Robert Moore later said that no man in England but Defoe ever stood in the pillory and later rose to eminence among his fellow men.

After his three days in the pillory, Defoe went into Newgate Prison. Robert Harley, 1st Earl of Oxford and Earl Mortimer, brokered his release in exchange for Defoe's co-operation as an intelligence agent for the Tories. In exchange for such co-operation with the rival political side, Harley paid some of Defoe's outstanding debts, improving his financial situation considerably. Within a week of his release from prison, Defoe witnessed the Great Storm of 1703, which raged through the night of 26–27 November. It caused severe damage to London and Bristol, uprooted millions of trees and killed over 8,000 people, mostly at sea. The event became the subject of Defoe's The Storm (1704), which includes a collection of eyewitness accounts of the tempest. Many regard it as one of the world's first examples of modern journalism. In the same year he set up his periodical A Review of the Affairs of France which supported the Harley Ministry, chronicling the events of the War of the Spanish Succession (1702–1714). The Review ran three times a week without interruption until 1713. Defoe was amazed that a man as gifted as Harley left vital state papers lying in the open, and warned that he was almost inviting an unscrupulous clerk to commit treason; his warnings were fully justified by the William Gregg affair. When Harley was ousted from the ministry in 1708 Defoe continued writing it to support Godolphin, then again to support Harley and the Tories in the Tory ministry of 1710 to 1714. After the Tories fell from power with the death of Queen Anne, Defoe continued doing intelligence work for the Whig government, writing Tory pamphlets that actually undermined the Tory point of view.

Not all of Defoe's pamphlet writing was political. One pamphlet (originally published anonymously) entitled A True Relation of the Apparition of One Mrs. Veal the Next Day after her Death to One Mrs. Bargrave at Canterbury the 8th of September, 1705, deals with interaction between the spiritual realm and the physical realm. It was most likely written in support of Charles Drelincourt's The Christian Defense against the Fears of Death (1651). It describes Mrs. Bargrave's encounter with an old friend Mrs. Veal, after she had died. It is clear from this piece and other writings, that while the political portion of Defoe's life was fairly dominant, it was by no means the only aspect.