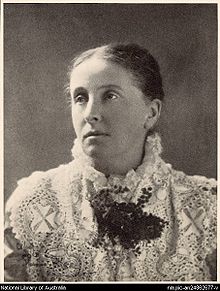 Ada Cambridge (1844-1926), writer, was born on 21 November 1844 at St Germans, Norfolk, England, daughter of Henry Cambridge, gentleman farmer, and his wife Thomasina, née Emmerson, a doctor's daughter. She grew up in Downham, Norfolk, a perceptive and cherished child, learning little from a succession of governesses but reading widely and delighting in the fen country of her birth. Devout Anglicanism inspired her first modest publications, Hymns on the Litany and Two Surplices. A Tale (London, 1865). On 25 April 1870 at Holy Trinity, Ely, she married George Frederick Cross, a curate committed to colonial service; on 19 August they landed in Melbourne.

In the following years pastoral work took them to Wangaratta (1870), Yackandandah (1872), Ballan (1875), Coleraine (1877), Bendigo (1883), Beechworth (1885) and Williamstown (1893). Ada was centred on but not confined by home and family in those decades and the busy life of their different parishes gave her a wide range of colonial experience which she later recalled in the engaging and valuable Thirty Years in Australia (1903). This and her childhood reminiscences, The Retrospect (1912), inspired by a return visit to England in 1908, show to what extent she drew upon personal experience and private dream-world for her novels. She herself emerges as frail and charming, never robust after a carriage accident in the 1870s; her ideas were considered a little daring and even improper for a clergyman's wife. She revealed more of herself in her poetry, but although she was the first significant Australian woman poet her best work, The Hand in the Dark, did not appear until 1913. It contained some of the descriptive lyrics and reflective sonnets of the hastily suppressed Unspoken Thoughts (1887) which had expressed religious anxieties, thoughts on the limitations of sexual love and concern for the under-privileged.

She began writing with purpose during snatched leisure in 1873, 'to add … to the family resources when they threatened to give out'. Her fluent and unpretentious work attracted attention at once: Up the Murray which was published as a serial in the Australasian in 1875, the first of several to appear in the next fifteen years in those pages, gained her passport into the society of the Anglo-Australian aristocracy which she found so congenial and portrayed repeatedly in her novels. Her fourth novel, A Marked Man (London, 1890), was her first financial success, and with her next, The Three Miss Kings (London, 1891), she won wider recognition in both England and Australia. Altogether she produced twenty-one novels, three volumes of poetry, two autobiographies and contributed to such journals as the Atlantic Monthly and the Australian Ladies' Annual. On the whole Ada Cambridge wrote about the section of colonial society most closely associated with England and its styles and standards. Within the limits of a conventional romantic plot and the setting of Toorak mansions or pastoral homesteads, the newly-arrived English men or women of her earlier serials met and won their marriage partners, while her heroines escaped the allurements of vulgar wealth to be restored to men who best represented the fashionable ideals of gentle breeding. A critic of 1882 praised her 'quiet good sense' in handling such material, her insight into character and her 'power of making a very ordinary and by no means improbable story highly interesting'. The proper basis of marital choice was the theme of her later novels. In A Marked Man she successfully joined it with that of exile, going on to vary both in later works, although without the scope and depth of Henry Handel Richardson.

In 1913 Ada Cambridge returned to England with her husband who had resigned from Williamstown at the end of 1909 with permission to officiate within the diocese until 1912; in 1910 they spent a few months at Carrick, Tasmania. He died at Brighton, England, on 27 February 1917, and later that year Ada Cambridge returned to Victoria where she died on 19 July 1926, at Elsternwick, survived by a son and a daughter.

She herself attributes much of her success to her early arrival on the scene of Australian writing. In A Marked Man and Not All in Vain (London, 1892) she is probably at her best although none of her novels reach the standard of Jessie Couvreur's Uncle Piper of Piper's Hill nor do they evoke the distinctively Australian atmosphere of Mrs Campbell Praed's writing. They remain an interesting portrayal of a way of life, the manners and conventions of a class of English Australians at the end of the nineteenth century.