We're coming into wedding season and it’s time for a look at weddings – and those all-important dresses – in literature.

In Samuel Richardson's early novel Pamela (1740) the heroine holds out for marriage and gets it (against considerable odds, like some early Bridget Jones), but she seems to get married, rather surprisingly, in a "rich white satin night-gown, that had been my good lady's, and my best head-clothes", so that the servants won't guess what's going on.

Jane Austen's books all end in weddings, but there is very little detail of the ceremonies, apart from Mrs Elton's bitchy description of Emma's nuptials as shabby and inferior to her own: "very little white satin, very few lace veils; a most pitiful business!" Mrs Bennet in Pride and Prejudice suggests that Lydia should not wait to have her wedding clothes (a whole trousseau rather than just gown) made, but should get on with getting married – well, yes: she's living in sin, on the edge of social doom. 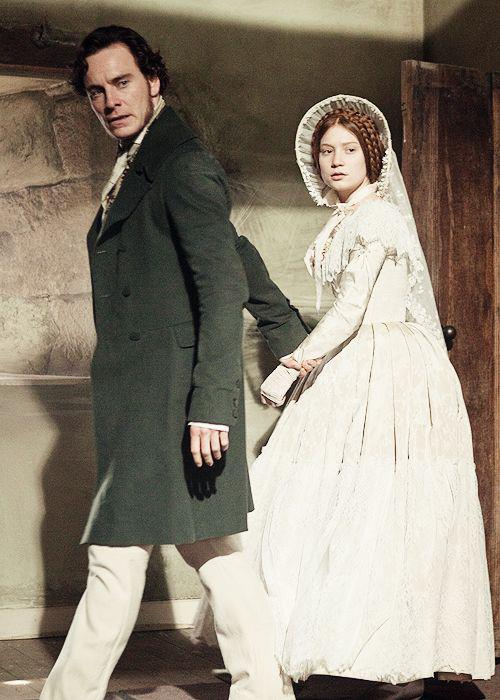 Is the most famous wedding in literature the one that doesn't take place? Jane Eyre is set to marry Mr Rochester wearing pearl-grey silk – she has insisted on plainness, but as an alternative to bright colours, not to white. He gives her a beautiful, elaborate veil, but that is destroyed by the woman from the attic. We know this story all too well, but the scene where Bertha comes and tries on the veil is bone-chilling – the more so because we feel such pity for her, though no one in the book seems to.

At the beginning of Mrs Gaskell's North and South (1854-55), Margaret Hale helps with the preparations for her cousin's wedding – as a guest she wears white satin, which 100 years later would have been very bad form. She also has some modern-sounding views: fed up with all the jobs for the girlish bridezilla Edith, she says her own choice would be "to walk to church through the shade of trees; and not to have so many bridesmaids, and to have no wedding-breakfast".

In the 19th century a new dress might be obtained for the wedding, but it is not necessarily white, and it will be used again – and plenty of women just wore their best dress, perhaps with a veil. The tradition for white seems to have started with the weddings of Queen Victoria and then her daughters, but took a long time to catch on. The one-off wedding dress is a 20th-century invention, and even then, as we discover in the work of Nancy Mitford and Somerset Maugham, a new bride was expected to wear her wedding dress to her first dinner parties. 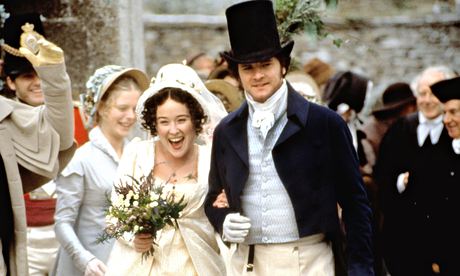 In Mitford's The Pursuit of Love, published in 1945 but looking back at a 1920s wedding, Louisa's wedding dress was "short to the knee and had a train, as was the hideous fashion then. [Her sister] Jassy got very worked up about it. 'So unsuitable … Women are always buried in their wedding dresses aren't they? Think of your poor old dead legs sticking out.'"

There's an intriguing bit of self-plagiarism in Anthony Burgess's magisterial Earthly Powers – published in 1980 but again looking back to this era – as Hortense gets married, in 1919:

"The dress was made by the rising house of Worth and was very modern, that is to say it had a tubular bodice, low waist, gathered skirt that only just covered the knees, shirttype sleeves, flared lace oversleeves, low U-shaped neckline, and a fine chiffon veil with embroidered edges."

"Estella wore a shortskirted wedding dress with shirttype sleeves and flared lace oversleeves, a low U neckline, a chiffon veil with embroidery on the edge …"

There is no plot reason for this. Did he forget? However, Burgess was quite wrong to say Worth was a 'rising house' in 1919: it had been the pre-eminent Paris fashion house for rich English and American women for many, many years by then, frequently mentioned in novels of the era.

In fact, the House of Worth had the privilege of providing the wedding dress for Harriet Vane in Dorothy L Sayers' Busman's Honeymoon in 1937 – "a period gown in stiff gold brocade". Her bridesmaids are academics from her old Oxford college in their Sunday best and furs – they had suggested wearing their gowns and mortarboards but thought better of it. It must have made a lovely wedding photo.

Civil ceremonies don't feature much in books, and when one turns up in Graham Greene's 1938 Brighton Rock, Pinkie and Rose's event is typically miserable:

"She had tricked herself up for the wedding, discarded the hat he hadn't liked: a new mackintosh, a touch of powder and cheap lipstick. She looked like one of the small gaudy statues in an ugly church."

In the 60s and 70s, wedding formality took something of a dip. In his letters, Evelyn Waugh rather charmingly describes his daughter Margaret getting married in 1962 "in a tea gown of her great-grandmother's out of the acting cupboard, used in countless charades". In Margaret Drabble's 1963 A Summer Bird-Cage, a bride gets married wearing a dirty bra. And in Curtis Sittenfeld's American Wife – a 2008 novel about a US president's spouse – Alice's 70s wedding outfit is:

"[W]hite cotton, a blousy v-necked top with a cinched waist and a calf-length skirt that I wore with my white pumps. Priscilla Blackwell [the groom's mother] … exclaimed, 'Isn't that a sweet little frock! Why you look like a pioneer preparing to cross the Great Plains.'"

But from the 1990s the giant affairs, and dresses, came back, ever more elaborate and fancy. There's a haunting description in WG Sebald's The Rings of Saturn of a dress that is never worn:

"[A] bridal gown made of hundreds of scraps of silk embroidered with silken thread, or rather woven over cobweb-fashion, which hung on a headless tailor's dummy, was a work of art so colourful and of such intricacy and perfection that it seemed almost to have come to life."

In Donna Tartt's The Goldfinch, published last year, there are preparations for a major society wedding, but it's clear there's going to be no description of this event, or the clothes, and that the whole circus is rather vulgar.

Weddings have much less place in modern literary fiction – perhaps authors are leaving the subject to what they consider to be chicklit. But surely some same-sex weddings are turning up in books now?

Comment below to give us your favourite literary wedding scene/outfit …

Similar articles
#LITERARY NEWS
‘English Rakugo Show’ took place in Nur-Sultan
2552
#LITERARY NEWS
Astana hosts an Eurasian Literary Forum under a title “The Power of a Word in a Modern World” these days
8239
#LITERARY NEWS
It has been 93 years since the Union of Writers of Qazaqstan was established.
14061