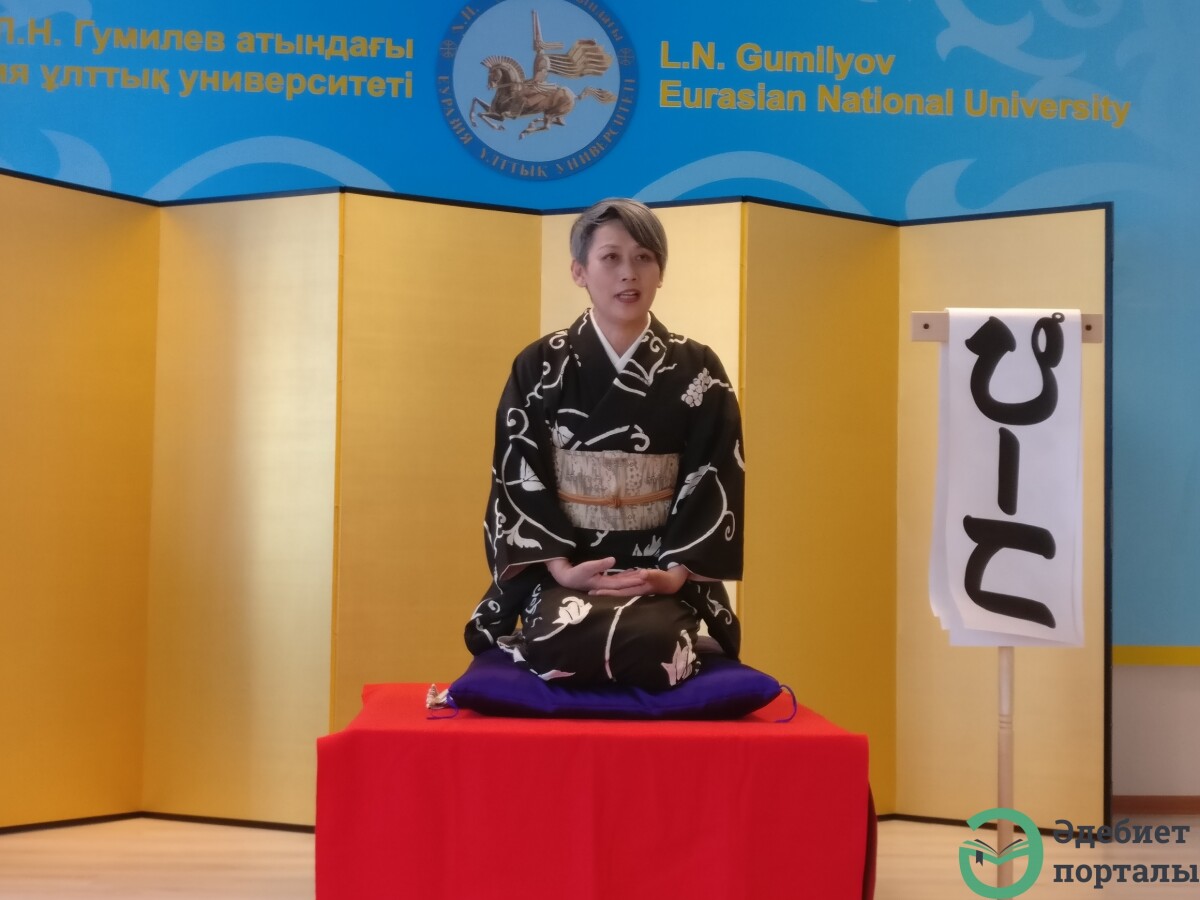 On the 30 th of March, 2019 with the support of the Embassy of Japan in the Republic of Qazaqstan an ‘English Rakugo Show’ took place in the premises of L.N.Gumilyov Eurasian National University in Nur-Sultan.

‘Rakugo’ is a Japanese traditional narrative art, existed over 500 years. It is not a physical comedy and presents nothing more than a person, dressed in a kimono, kneeling on a cushion and talking for 15 or even up to 90 minutes. Suddenly a Rakugo performer starts to talk, you can see different characters of the story shown by change in pitch, tone and a delicate turn of the head. 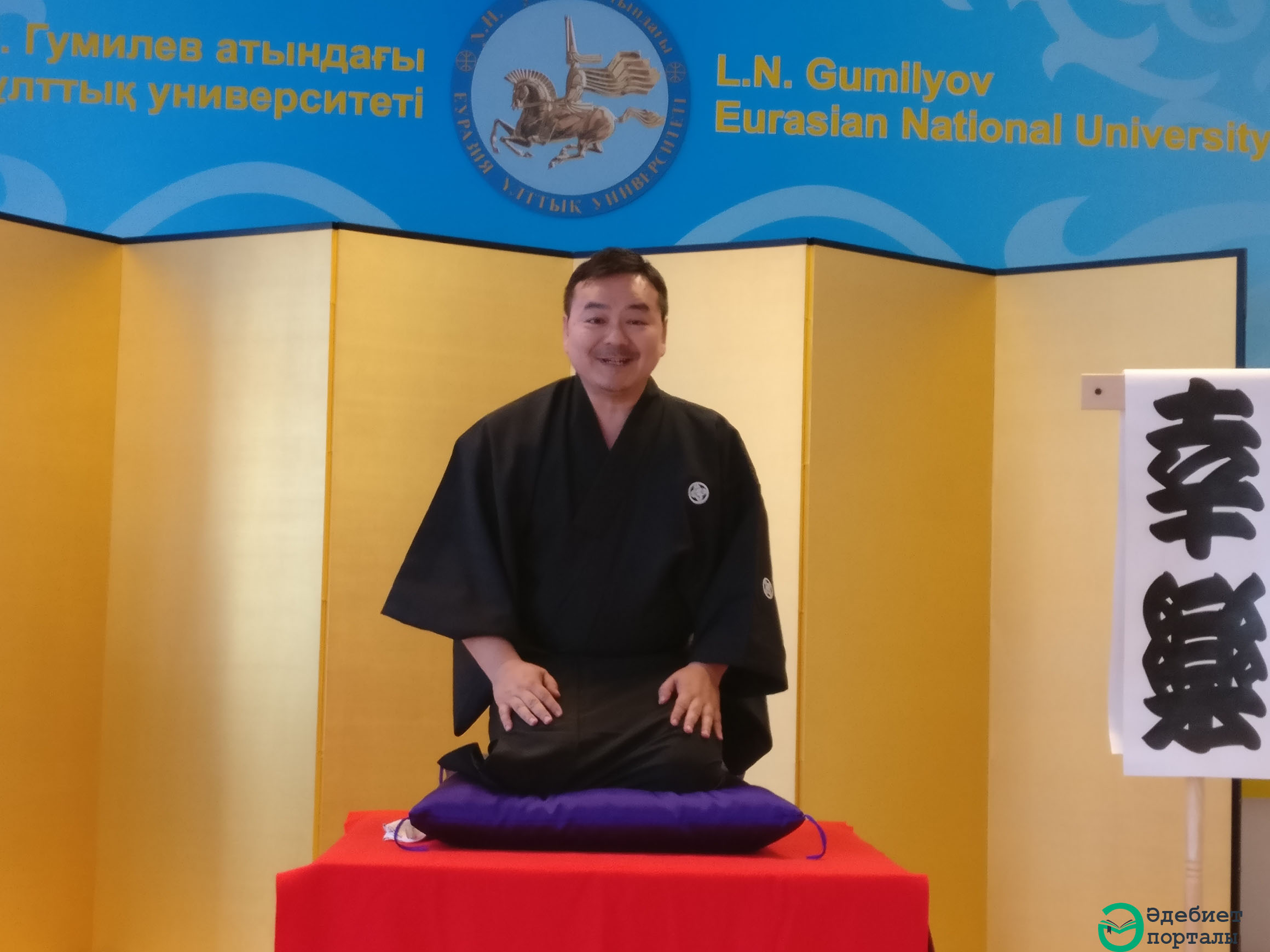 Usually it requires good command of Japanese to understand the storyteller. But the English version of the performance is aimed to English speaking audience. The stories depict the everyday lives of ordinary people. It may be a farcical comedy or warmhearted human drama.

Rakugo was created by Buddhist monks in the IX-X centuries to do their lectures more inspirational, thought –provoking. At the beginning the art developed in an oral form, the first written document “Uji Shui Monogatari”, containing the humorous stories is dated from 1213-18. 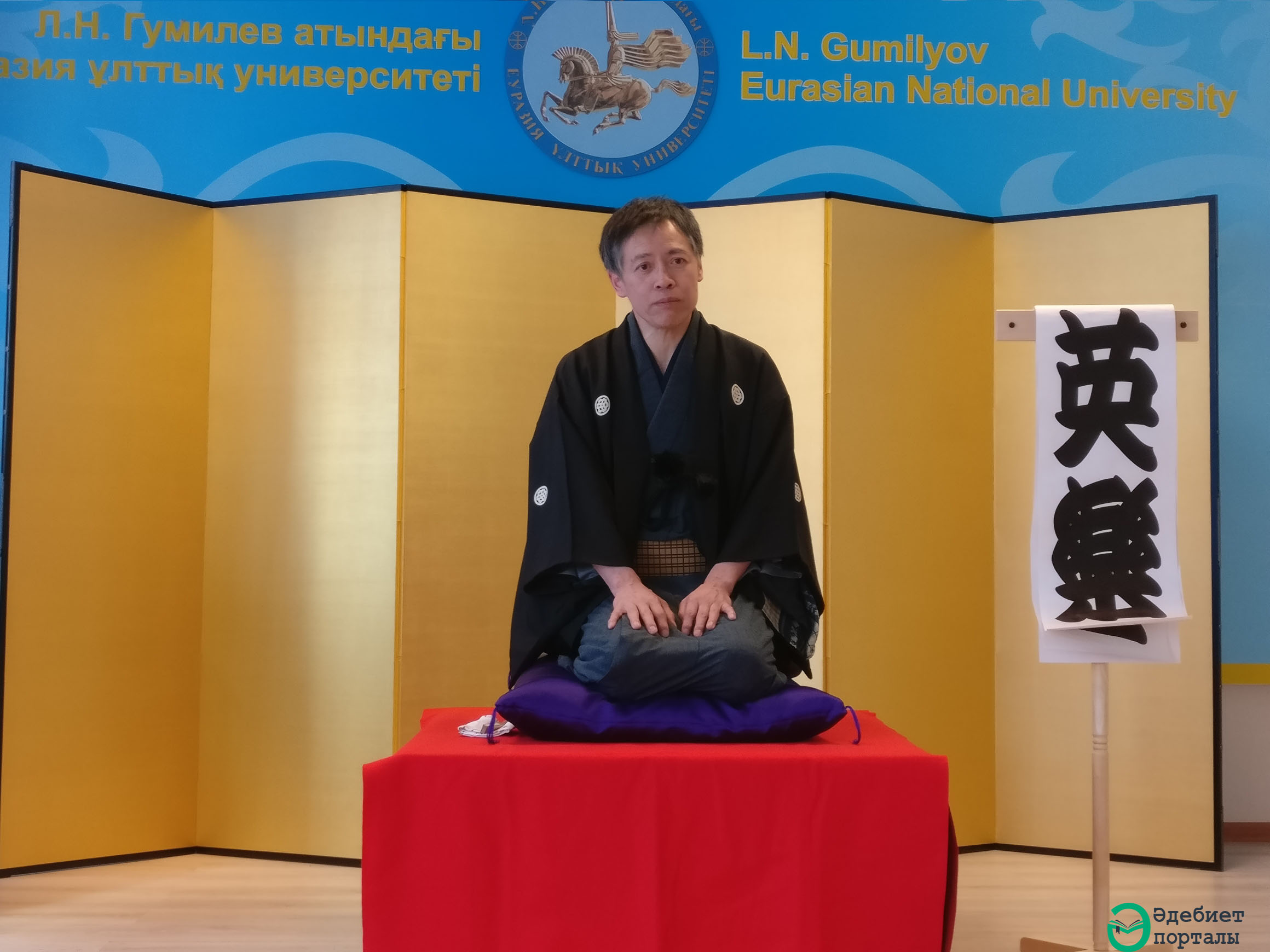 Mr.Eiraku Kanariya, a leader of the team, visited Qazaqstan and a promoter of English Rakugo said in the interview given to our Literary portal, that his team traveled around the world with its Rakugo show. So far he and his team have toured several states in the US, Denmark and Laos. Before arrival to Qazaqstan they visited Georgia. According to him, a profession of “rakugoka”, in other words a storyteller is very old one. There are several traditional vaudeville theatres in Japan, where you can go and see live ‘rakugo’ performances every day. The ‘rakugoka’ highest-ranked masters are among the most highly- paid people in Japan. There is no special school or university, where you can get a diploma of a ‘rakugoka’. You can get appropriate skills to be a rakugoka from your Master or teacher. Training lasts 2-3 years, and it is very strict. In the course of training, the student learns the performances of his master, trains his voice, artistic and oratorical abilities. The Master decides whether you are ready to perform on the stage or not. There are currently more than 800 ‘rakugo’ story tellers in Japan, among them more than 30 women and one narrator of Western origin.

He also mentioned that it is customary in Japan to invite the ‘rakugo’ story tellers to junior schools to make a performance in front of children. Study of traditional Japanese arts is an obligatory part of the school curriculum. One of the numerous studies showed that 62.1% of Japanese in the age group from 21 to 30 years first became acquainted with the art of ‘rakugo’ at a junior school.

Rakugo performances are carried out not only in theaters of Tokyo and Osaka, but also they can be performed in concert halls, Buddhist and Shinto temples, universities, cultural centers and any other place where you can sit down and start telling a fascinating story. Among the traditional Japanese arts, ‘rakugo’ remains one of the most popular.

An interview with Mr.Eiraku Kanariya was very interesting and the Rakugo show itself was amazing. Guests of the event got unforgettable impressions.

Similar articles
#LITERARY NEWS
Astana hosts an Eurasian Literary Forum under a title “The Power of a Word in a Modern World” these days
9208
#LITERARY NEWS
It has been 93 years since the Union of Writers of Qazaqstan was established.
16760
#LITERARY NEWS
Nobel Prize in Literature 2018 cancelled after sexual misconduct scandal
12014