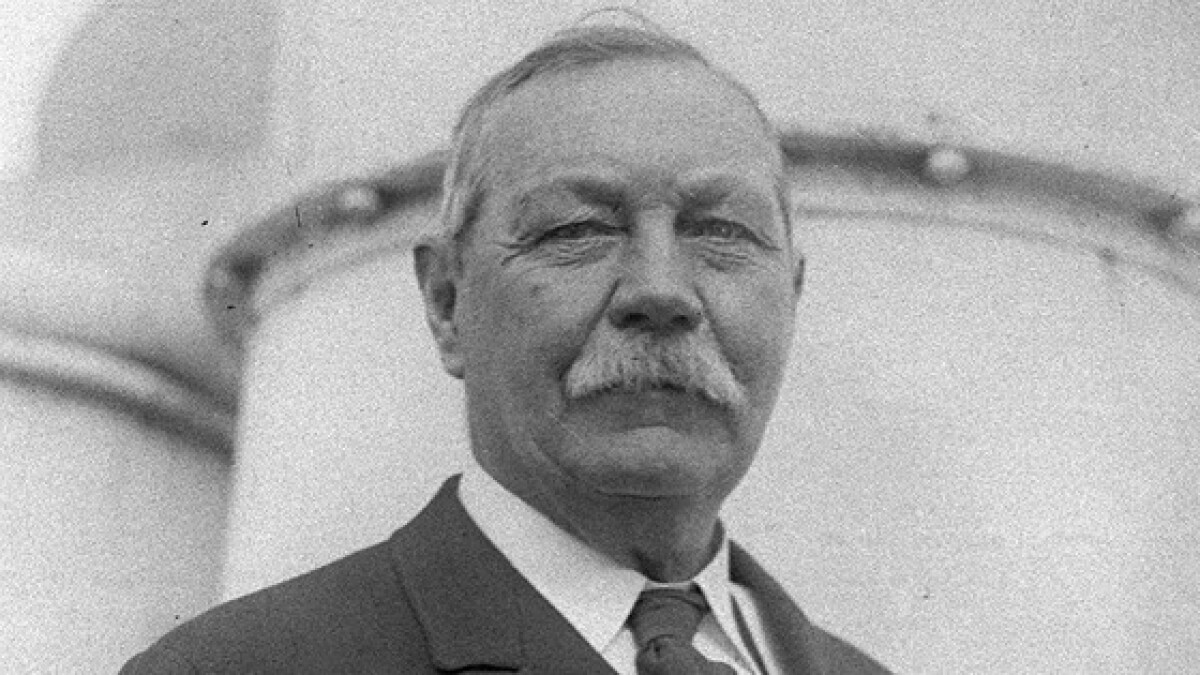 Today, on May 22, 2014 the world commemorates the 155th anniversary of birth of Sir Arthur Conan Doyle, the creator of Sherlock Holmes and author of the Hound of the Baskervilles.

He was a prolific writer whose other works include fantasy and science fiction stories, plays, romances, poetry, non-fiction, and historical novels. 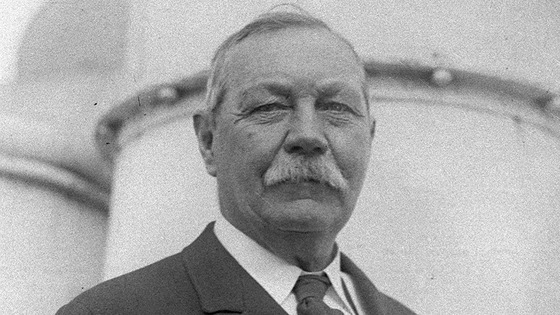 Arthur Conan Doyle was born on May 22, 1859, in Edinburgh, Scotland. The Doyles were a prosperous Irish-Catholic family, who had a prominent position in the world of Art.

Doyle was educated in Jesuit schools. He studied at Edinburgh University and in 1884 he married Louise Hawkins. Doyle qualified as doctor in 1885. After graduation Doyle practiced medicine as an eye specialist at Southsea near Porsmouth in Hampshire until 1891 when he became a full time writer. 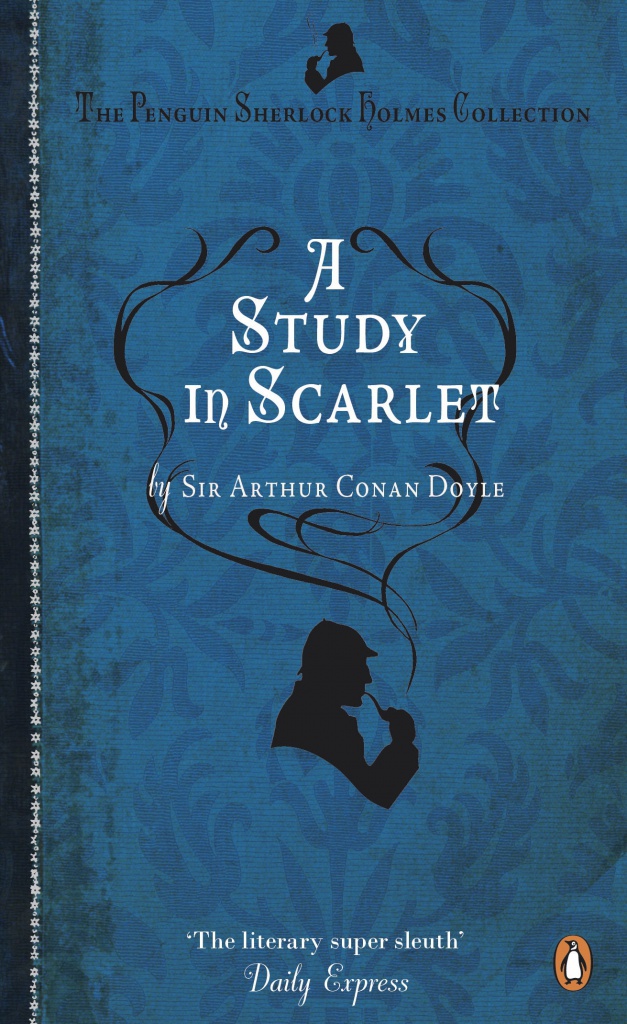 First story about Holmes, A study in Scarlet, was published in 1887 in ‘Beeton Christmas Annual.’. The novel was written in three weeks in 1886. It introduced the detective and his associate and friend, Dr. Watson, and made famous Holmes’saddress at Mrs. Hudson’s house, 221B Baker Street, London. Their major opponent was the malevolent Moriarty, the classic evil genius who was a kind of doppelgänger of Holmes. Also the beautiful opera singer Irene Adler caused much trouble to Holmes.

Following the death of his wife Louisa in 1906, the death of his son Kingsley just before the end of the First World War, and the deaths of his brother Innes, his two brothers-in-law (one of whom was E. W. Hornung, creator of the literary character Raffles) and his two nephews shortly after the war, Doyle sank into depression. He found solace supporting spiritualism and its attempts to find proof of existence beyond the grave.

Doyle was found clutching his chest in the hall of Windlesham Manor, his house in Crowborough, East Sussex, on 7 July 1930. He died of a heart attack at the age of 71.

Here are 19 things that you may not know about the writer:

1. Doyle was one of the earliest motorists in Britain
He reportedly bought a car without ever having driven one before. In 1911, he took part in the Prince Henry Tour, an international road competition organised by Prince Henry of Prussia to pit British cars against German ones. Doyle paired up with his second wife, Jean, as one of the British driving teams.

4. Doyle was on the same cricket team as Peter Pan writer JM Barrie
They also worked together on a comic opera, Jane Annie, which Barrie begged his friend to revise and finish for him.

5. He could have discussed Dracula and Treasure Island with their authors
Doyle was also friends with Bram Stoker, and Robert Louis Stevenson was a fellow classmate at the University of Edinburgh.

6. He helped to popularise skiing
He not only liked cricket and football, but Doyle helped to popularise the winter sport. Following a move to Davros, Switzerland in 1893 (the mountain air was prescribe to aid his wife’s health), he mastered the basics with the help of the Brangger brothers, two locals who had taken to practising the sport after dark to avoid being teased by the townsfolk. Together, they were the first people to make the 8,000ft pass through the Maienfelder Furka, which separated Davos from the neighbouring town of Arosa. Doyle was also the first Englishman to document the thrill of skiing: “You let yourself go,” he said. “Getting as near to flying as any earthbound man can. In that glorious air it is a delightful experience.” Doyle correctly predicted that in the future hundreds of Englishmen would come to Switzerland for the “skiing season”. 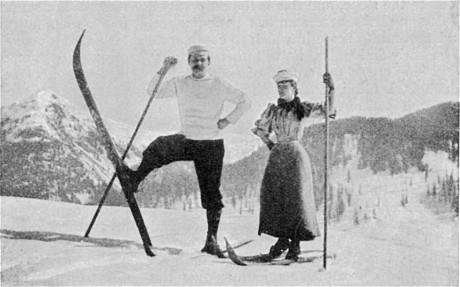 7. He was a goalie
Under the pseudonym AC Smith, the writer played as a goalkeeper for amateur side Portsmouth Association Football Club, a precursor of the modern Portsmouth FC.

8. Doyle ran for parliament... twice!
Doyle ran for parliament (representing the Unionist Party) once in Edinburgh (in 1900) and once in the Border Burghs (in 1906). Although he received a respectable vote both times he was not elected. In the 1900 general election, Doyle was defeated by CM Brown of the Liberal Party, who received 3,028 votes against 2,459 cast for Doyle.

9. He was too fat to fight
The reason why he couldn’t become a soldier in the Boer War was because he was overweight. Instead, he volunteered as a ship's doctor and sailed to Africa.

10. Ophthalmology's loss was literature's gain
Arthur Conan Doyle set up an ophthalmology practice in London. Doyle wrote in his autobiography that not a single patient ever crossed his door. Although, the silver lining was that he could dedicate his time to writing.

11. He believed in fairies
Sherlock might have been a sceptic but Arthur Conan Doyle believed in fairies. Well, he was convinced by the Cottingley Fairy photographs, the famous 1917 hoax. He even spent a million dollars promoting them and wrote a book, The Coming of the Fairies (1921), on their authenticity.

12. And also believed in a number of mediums
But this came at the cost of his friendship with Harry Houdini, who at the same time was trying to disprove the claims of the Spiritualist movement.

13. Why he killed off his most famous creation?
Sherlock Holmes was far from being Doyle’s own favourite character and was killed off in 1893, only to be resurrected 10 years later after public demand and monetary persuasion. He had earlier told a friend: "I couldn't revive him if I would, at least not for years, for I have had such an overdose of him that I feel towards him as I do towards pâté de foie gras, of which I once ate too much, so that the name of it gives me a sickly feeling to this day." However, there may have been other reasons for the writer killing off his famous creation, as it happened in the same year that Doyle’s alcoholic father died in an asylum.

16. There's a square in Switzerland named after him
The town of Meiringen in Switzerland was the location of The Adventure of the Final Problem, the novel in which the author killed the detective off. In 1988, a statue of Sherlock Holmes was placed in the village square, now named Conan Doyle Place.

17. Sir Arthur Conan Doyle didn't just write mysteries, he actually solved a few
One of particular interest to him was The Curious Case of Oscar Slater - for the murder of Marion Gilchrist, a wealthy 82-year-old woman from Glasgow. Doyle applied the “Holmes method”, in which he uncovered new evidence, recalled witnesses and questioned the prosecution's evidence. His findings were published as a plea for Slater's pardon. It caused a sensation and there were calls for a retrial, but all this was promptly ignored by the Scottish authorities. The desperate and incarcerated Slater later smuggled messages out of prison and Doyle's interest in the case was reignited. He wrote to politicians and used his own money to fund Slater's legal fees. One politician, Ramsay McDonald - Britain's first Labour prime minister - informed the Scottish Secretary that the police and the legal authorities had colluded to withhold evidence and influence witnesses. Slater was subsequently released from prison with £6,000 compensation but never shared it with Doyle.

18. Doyle died holding a flower
Doyle died on July 7, 1930. He collapsed in his garden, clutching his heart with one hand and holding a flower in the other. His last words were to his wife. He whispered to her: “You are wonderful.”

19. A séance was organised for him to make an appearance from beyond the grave
Following his death, a séance was conducted at the Royal Albert Hall. Thousands attended, including his wife and children. A row of chairs were arranged on the stage for the family, with one left empty for Sir Arthur. Even though he did not appear, there were many people in the audience who claimed they had felt his presence among them.

Similar articles
#LITERARY NEWS
‘English Rakugo Show’ took place in Nur-Sultan
3047
#LITERARY NEWS
Astana hosts an Eurasian Literary Forum under a title “The Power of a Word in a Modern World” these days
9957
#LITERARY NEWS
It has been 93 years since the Union of Writers of Qazaqstan was established.
17376