Alexandre Dumas son - the son (fils) of the dramatist and novelist Alexandre Dumas, called Dumas père was a French writer and dramatist, best known for Camille (The Lady of the Camellias). The writer was born on July 27 and today he would be 190 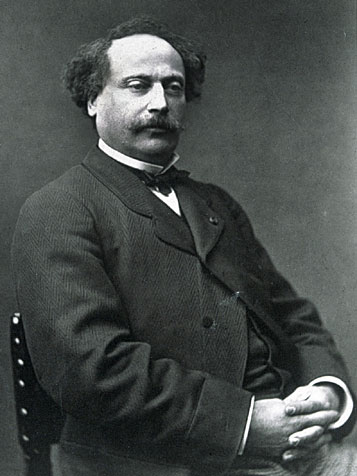 He also was one of the founders of the “problem play”—that is, of the middle-class realistic drama treating some contemporary ill and offering suggestions for its remedy.

Dumas fils possessed a good measure of his father’s literary fecundity, but the work of the two men could scarcely be more different. His first success was a novel, La Dame aux camélias (1848), but he found his vocation when he adapted the story into a play, known in English as Camille, first performed in 1852. (Giuseppe Verdi based his opera La Traviata, first performed in 1853, on this play.) Although Dumas père had written colourful historical plays and novels, Dumas fils specialized in drama set in the present. The unhappy witness of the ruin brought on his father by illicit love affairs, Dumas fils—himself the child of one of these affairs—devoted his plays to sermons on the sanctity of the family and of marriage. Le Demi-Monde (performed 1855), for example, dealt with the threat to the institution of marriage posed by prostitutes. Modern audiences usually find Dumas’s drama verbose and sententious, but in the late 19th century eminent critics praised his plays for their moral seriousness. He was admitted to the Académie Française in 1875.

Similar articles
#LITERARY NEWS
‘English Rakugo Show’ took place in Nur-Sultan
1909
#LITERARY NEWS
Astana hosts an Eurasian Literary Forum under a title “The Power of a Word in a Modern World” these days
4477
#LITERARY NEWS
It has been 93 years since the Union of Writers of Qazaqstan was established.
10536