Home Literary process The age of majority of the young capital

The age of majority of the young capital 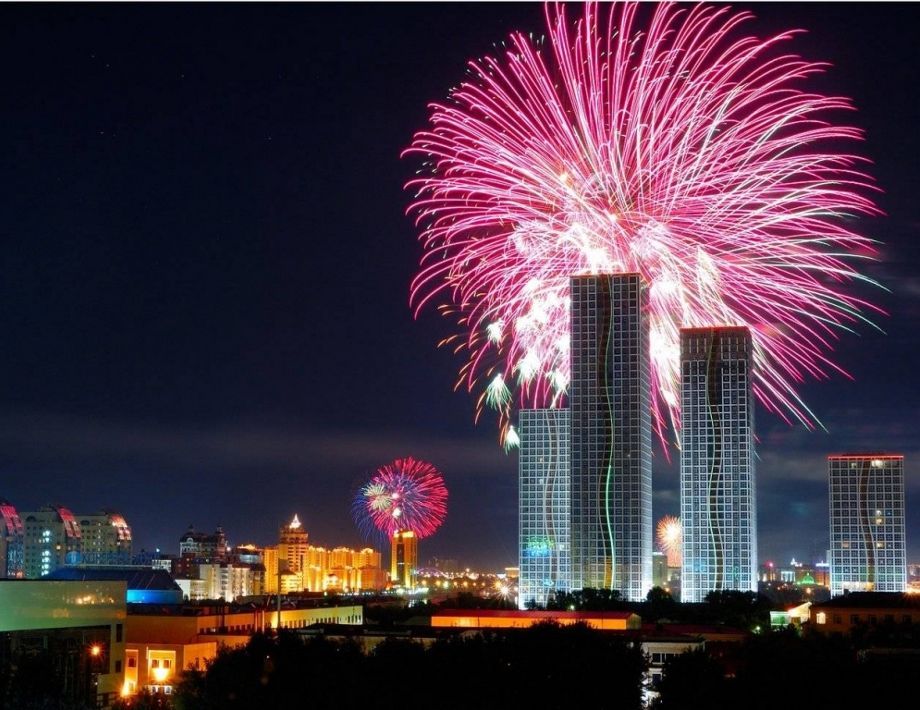 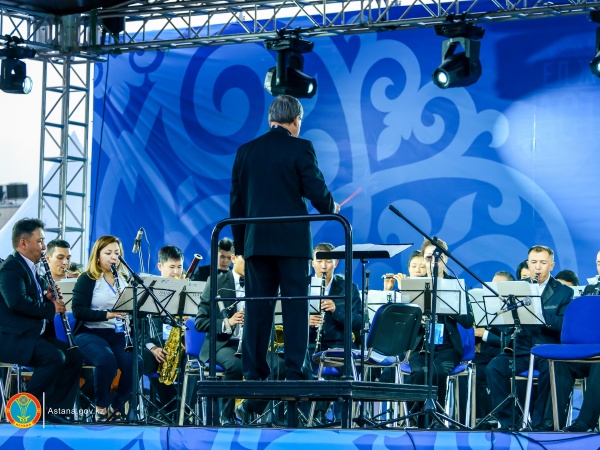 “Astana Samaly” held in the capital for the seventh time. Festival annually brings together lovers of wind instruments at the monument “Bayterek”. Residents of the city were able to enjoy the virtuoso playing on instruments of Astana akimat brass orchestras of the State Philharmonic, the National Guard of the Republic of Kazakhstan, East Kazakhstan regional philharmonic society, "Tagil-BAND» from Nizhni Tagil and Orenburg (Orynbor) Municipal Orchestra  Russia(currently). Special guest at the music festival has become a folk group Storici Sbandieratori delle Contrade di Cori. 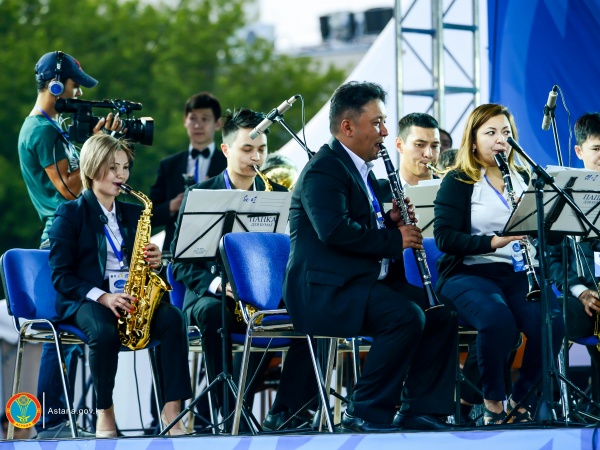 - Usually, the activities we learn by chance, so we did not plan to get it to this event. We are always for organization of cultural events in the city. Congratulations to all residents and guests with a holiday. Let our capital develops further. Get plenty of cultural events in the capital - shared their impressions Amalbekov's family. The festival takes place over three days - from 4 to 6 July. Final parade concert will take place on Wednesday on the Avenue of the Republic. It starts from the Military Historical Museum to the Palace of "Zhastar".

The Broadway musicals were seen by residents and guests of Astana. 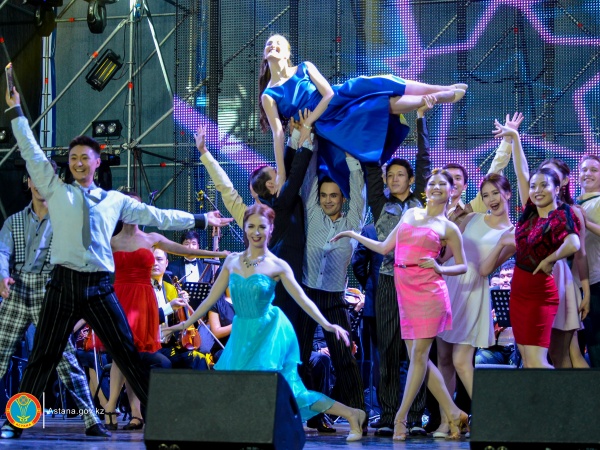 80 US and metropolitan artists performed passages of the Broadway musical on stage in the open air in Astana. Evening performance of Broadway Bound on the area around the monument "Bayterek" timed to the Day of the capital and to the 25th anniversary of cooperation between Kazakhstan and the United States. The Broadway musical brought to the capital city one of the best American dance groups led by choreographer Paul Emerson. Among the American guests – A. Mikaela Gaston, Frank Martin, Gavin Stewart, Vanessa Owen, Catherine Pilkington and others. Incendiary show was not without local artists. 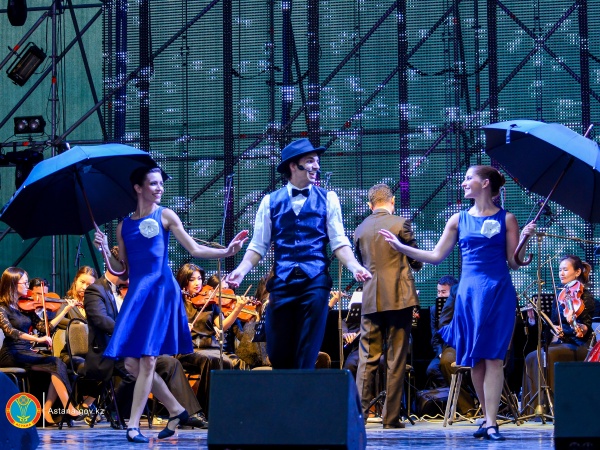 - Such musicals together with American and local artists in Astana for the first time. Today we showed passages - the most popular numbers from American Broadway. All week, the American actors rehearsed with metropolitan dance group, orchestra and choir. Guests trained local who quickly mastered all, they have great potential. We would like to in the future play and act the full Broadway show in Astana. In America it is considered folklore, to musicals in New York come to see from all over the world, - said the deputy cultural attaché of the US Embassy Matthew Wilson.

Another night of the Broadway musical will be held July 6 at 17.00 in the Palace of peace and harmony.

Folk songs and kuys were made at Town Square 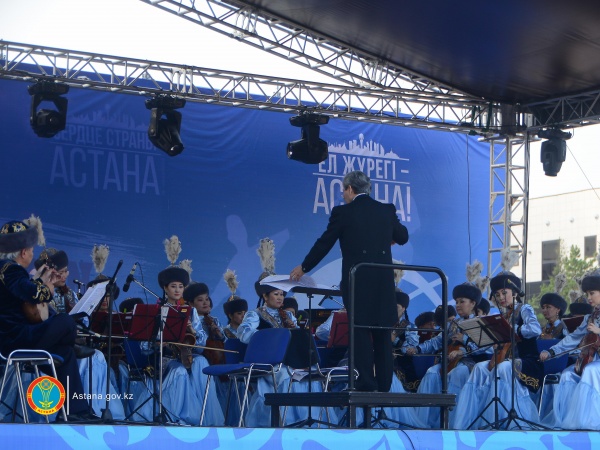 The opening of the fourth festival of folk instruments orchestra "Serper" was held 4.07.2016 at the Town Square. Folk songs, works and Kuys were performed by both Kazakstan and Russia groups. The first at the festival acted the staff of the Kazakh State Academic Philharmonic Orchestra in Astana conducted by Nurlan Bekenov,  the famous works of Nurgisa Tlendiev, kiuys of Kurmangazy, Tattimbet were performed, as well as the conductor-author's composition  Nurlan Bekenov "Shahnazar". Among the guest stars of Kazakhstan variety to watch performances of collectives came singer, People's Artist of the Republic of Kazakhstan Nurgali Nusipzhanov and opera singer, People's Artist of the USSR Bibigul Tulegenova. 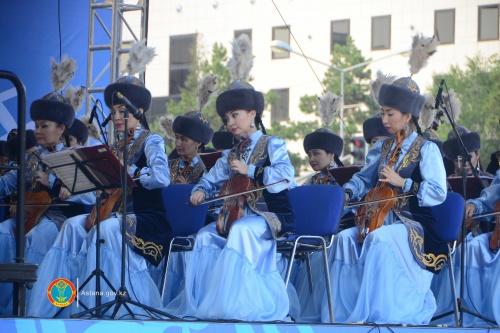 The main task of the festival, according to the director of the orchestra of the Kazakh State Philharmonic of Astana Sabyrzhan Seythanuly, is to bring together musicians and orchestras not only in Kazakhstan but also in other countries. 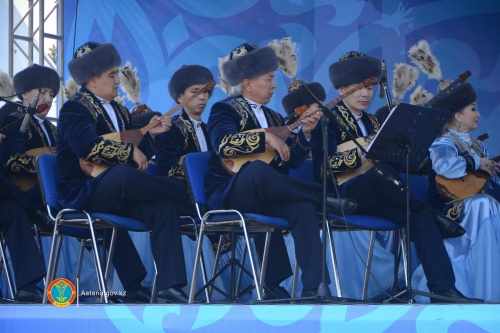 The Arkaim - town of 3D-entertainment opened in Astana. In the celebration of the Day of the capital located on the square to monument "Kazak Eli"     situated truly present 3D-interactive entertainment town "Arkaim - the city of the sun". Here, with the help of modern technologies Astana residents and visitors can dip in the ancient past and the unknown future. 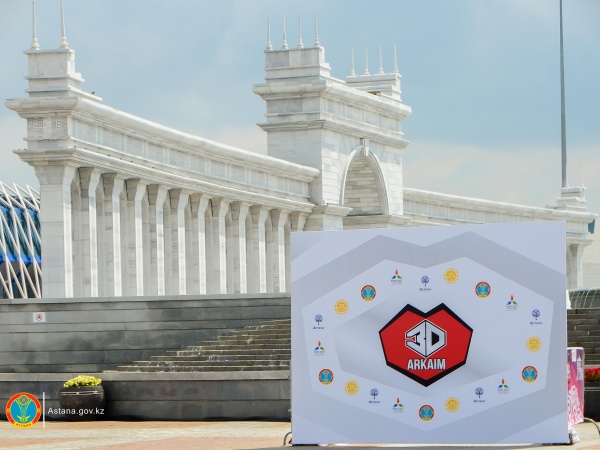 City consists of four zones. In the first sphere settled Multimedia Gallery "Property of Great Steppe", where you can see the evolution of the development from the Stone Age to the 17-19 centuries. Here, "come to life" items, jewelry, ornaments, which were created by the hands of our ancestors. About "Ak Baur" the first observatory, found hundreds of years ago in East Kazakstan, said projection theater, "Journey to the open space-Astana". Visiting this sphere, you can take a flight from the center of the capital to the space, to fly by passing main large planets and learn the necessary information about them. The journey comes to an end by dance battles in the style of "Star Wars." 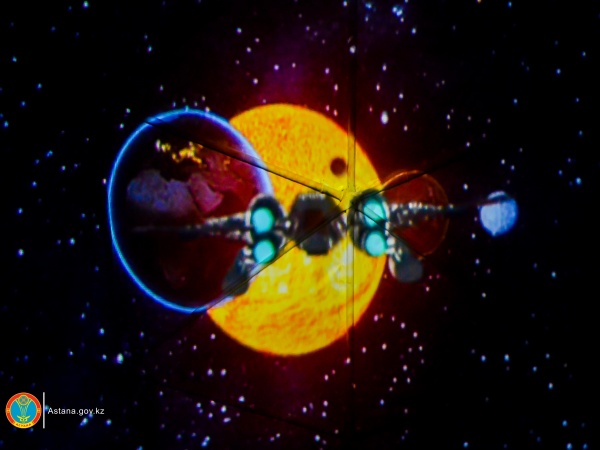 One of the highlights of the festival - a holographic theater, which tells the tragic story of beautiful woman Aisha Bibi and brave batyr Karakhan. The fourth zone is the concert and entertaining platform «Welcome to Astana city!», Where you can hear ethnic music in a completely new arrangement. Here are placed also themed interactive areas. The special atmosphere of the town create ethno-futuristic suits of animators, as well as unusual souvenirs in this style. The concert started at 19 o'clock. 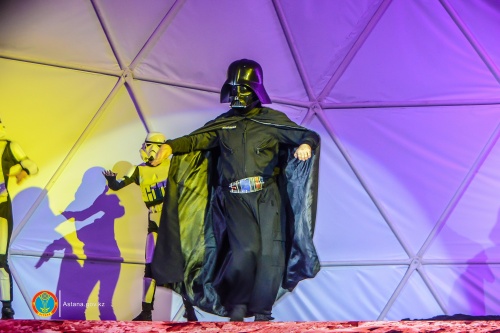 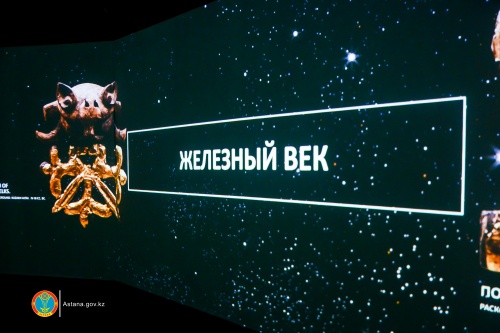 - This is a unique project that combines ethnic and new technologies - projection, holography. We create such town for the second time. And if in the past year have shown holography just as the technology, now we have created a theatrical play-piece setting. To this end, we invited directors, choreographers, and musicians. Multimedia Gallery in the past year was presented in the style of art, and in this - is dedicated to our history. On average, installation and assembly of spheres took three weeks, and the project was developed over a year - said project coordinator Rinat Kutdusov. Attend 3D-town is possible for free today, as well as 5 and 6 July from 11 to 21 hours. 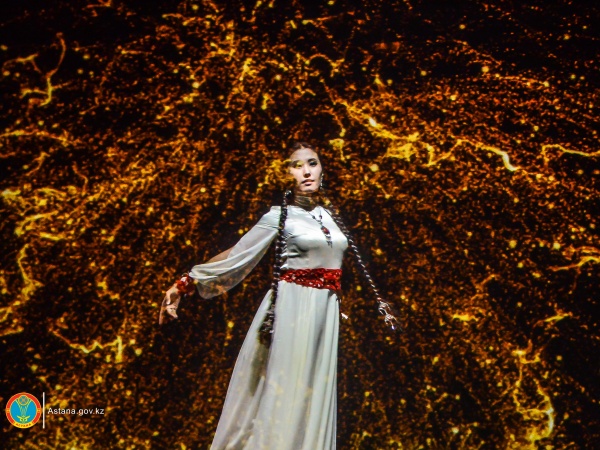 Photo exhibition "Tauelsizdik zhyry - Astana" is held in honor of the Capital Day. 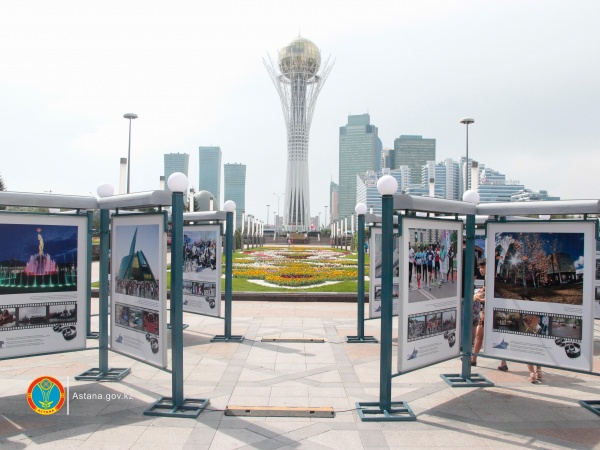 - Next year, the exhibition area will expand from the "Khan Shatyr" to Ak Orda. The following year, for the exhibition of EXPO-2017 is planned to create a virtual museum on Triumphal Arch. Residents of the capital will be able to see the city in all its glory in the virtual museum - shared Erlan Sattybaev, Director GCE 'management to ensure the preservation of monuments and sites of historical and cultural heritage of Astana akimat". Participants of exhibition does not hide their admiration for the young capital. 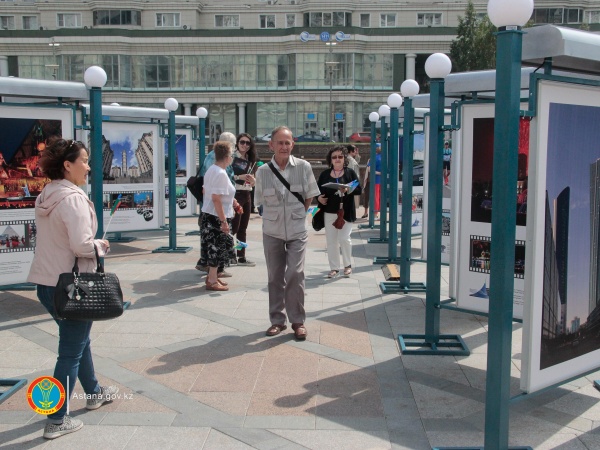 - Today, the participants of the International Symposium of Artists create an image of the new capital of Kazakhstan. For 25 years, out of the blue has grown young capital. Rich in history, rich culture and historical tradition has absorbed Astana. Happy birthday to the capital! Let each of us put all the power, energy, creativity, and artistic in the development of a unique city, - congratulated all gathered Camilla Lee, a member of the International Art Critics Association of UNESCO (AICA), a well-known art critic. Presented at the photo exhibition of the capital reflects the most significant events in the life of the city, in the picturesque foreshortenings show the sights of Astana. 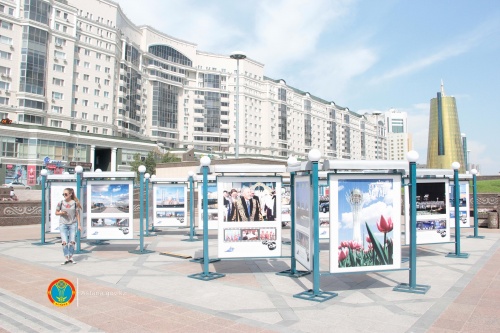 - I live here since 1964, when Tselinograd was the capital of Virgin Territory. I'd love to stroll around the city. During this time, the city has grown not only in terms of development of architecture, but also intellectually. Nice to talk with residents. You know, this picturesque heaven we have. This is truly dramatic sky has nowhere else in the world. Even when I photographed in the Russia, there the sky seemed somehow low or something, and here it is deep and blue - shared exhibitor Heinrich Kupriyanov.

Share:
Similar articles
#LITERARY NEWS
‘English Rakugo Show’ took place in Nur-Sultan
1682
#LITERARY NEWS
Astana hosts an Eurasian Literary Forum under a title “The Power of a Word in a Modern World” these days
3670
#LITERARY NEWS
It has been 93 years since the Union of Writers of Qazaqstan was established.
8825