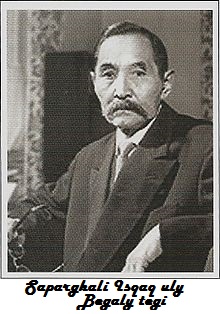 Begalin Sapargali Iskakuly - writer, poet, one of the founders of Kazakh children's literature. Sapargali Begalin was born in 1895 in the village Delegen of Abay district of East Kazakhstan region in cattleman family. He grew up in a family in which a well-known works of Abai, Shakarim, works from the heritage of the steppe poet-bard. When he was 7 years old, his father sent him to the mullah literacy. Study was easy to him, and by nature inquisitive boy quickly mastered reading and writing. 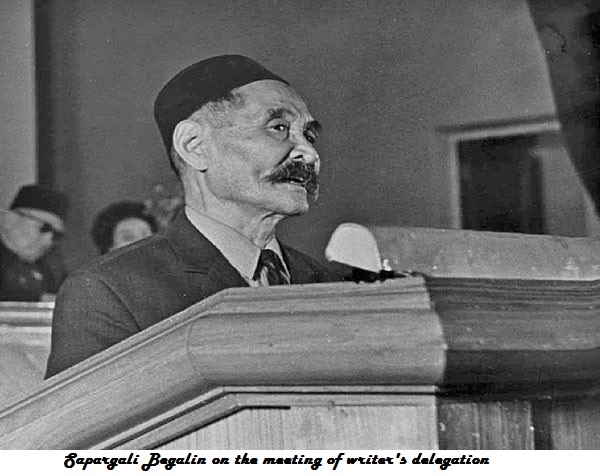 Difficult was in those years, the lives of ordinary Kazakhs, followed by poverty and deprivation. Many tests and fell to the share Saparagali. With 12 years, he is tending the sheep. After fierce jute family lost all the sheep, and the 16-year-old was forced to leave in Samipalatinsk, where he worked first as a loader on a river pier, then a coachman. There he studied the Russian language, enters the parish school. On the kid draws the attention of the competent schoolteacher Nurgali Kuldzhanov who helped to enter the Russian-Kazakh school, which Sapargali successfully completed in 1915. 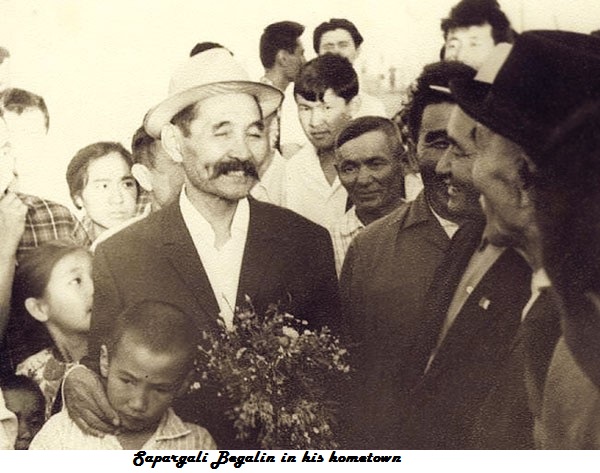 In 1916, the mobilization of S. Begalin hits the rear works at Petrograd, returning home in March 1917. Sapargali Begalin long worked wherever needed his energy and talent: in 1921 he was elected chairman of Degelensky parish executive committee, in 1923 the people's judge Karkarala County, then worked in Semipalatinsk Governor Court, Commissariat of Agriculture, comitee ofTurksib, since 1935 he worked in press and then in the Institute of language and literature of the Academy of Sciences of the Kazakh USSR. 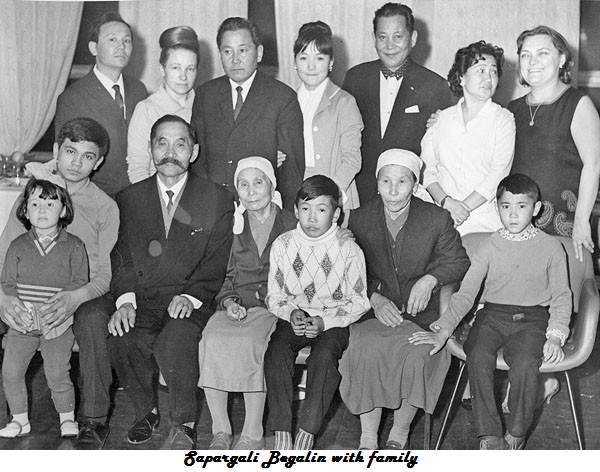 "I got a farewell,
From you and from fellow-countrymen,
For you do not regret forces,
Steppe mine! My dear shelter! "
S. Begalin 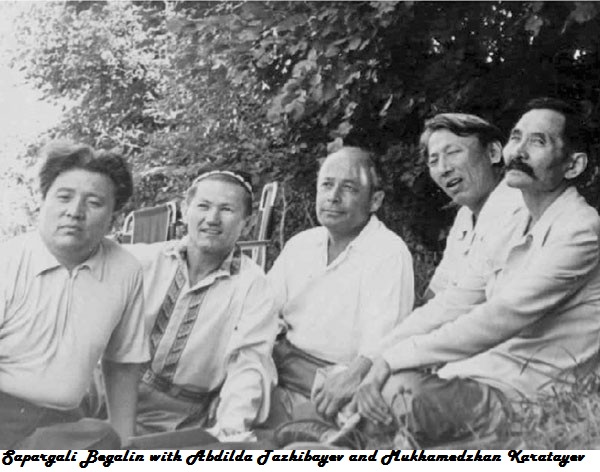 The first book of Sapargali Begalin - poem for children "Revenge of the Eagle" was published in 1943. The lyrical and romantic poems and the poems "Tsimlyanskoe Sea", "The mysterious source" and other Begalin sang transformation in the country, the beauty of his native land. Poem "Winged Kazakh" is dedicated to the Hero of the Soviet Union Nurken Abdirova. 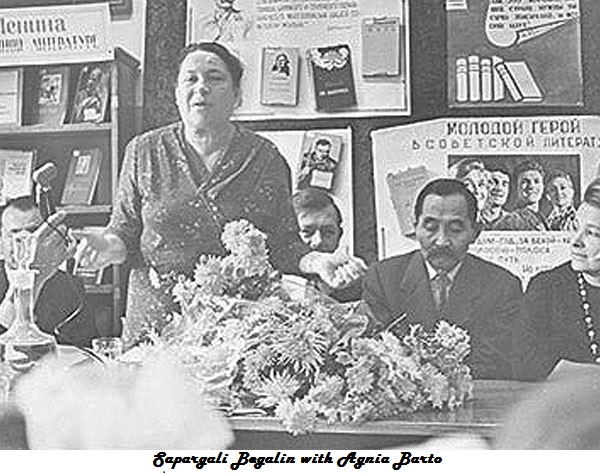 Excerpt "foal" from the poem:
As the tops of the reeds,
The tips of his ears,
Like fluff owl - bang,
Lips - velvet soft.
Croup rounded, shiny hair ...
Clinking cups of hooves,
At the steppes faster than the wind,
Wind light, flies! 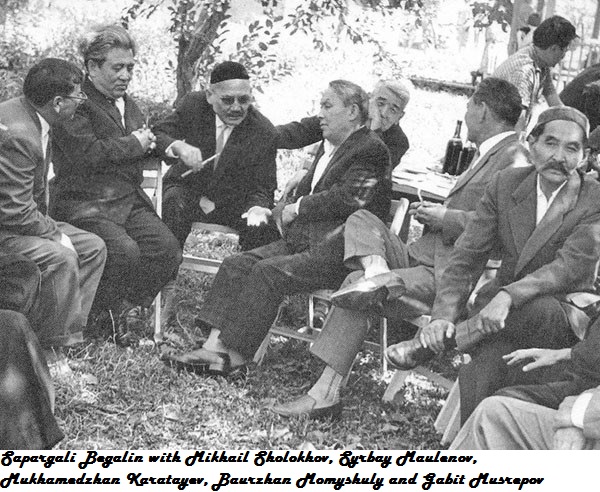 One after another, from the pen of a wonderful children's writer appear novels and short stories: "The meeting with the bear", "Koksegen", "Seid", "Saved by the deer", "girl herdsman", "old herdsman Story", "Hedgehog Esena" "Grandpa's apple", "young hunter" and others. Tale "Satzhan" was reprinted several times and has been translated into many languages.

Tales of classic of children's literature Sapargali Begalin freshed by sense of love for the motherland. For many years, the writer studied art bard Zhambyl Zhabayev. The result of the work became his monograph on the life and work of Zhambyl Zhabayev. A special place in the writer takes the story "Chocan Valikhanov". The writer also engaged in collecting and researching the works of Kazakh oral creativity, he has made a significant contribution to the publication of the works of famous folk poets. S. Begalin was a popular songwriter. In his poems created about 50 songs, such as "Karakoz", "Spring", "Lullaby", "White Dove" and so on. D. The authors of the music to the songs were such talented composers as M. Tulebaev, L. Hamidi, E . Rakhmadiyev and others.

S. Begalin much effort literary translation. They translated from Russian into Kazakh language of the works of Pushkin, Lermontov, Mamin-Sibiryak, Leskov, and many others.

Feather of the writer owns twenty-five poems, novels, twelve novels, short stories, nine one-act plays, the lyrics. Yet the most important thing in the work Sapargali Begalin - his work for children, and it is considered as the founder of Kazakh children's literature.Statement SapargaliBegalin said this: "I need to work hard, day and night, to climb to the very best that is in yourself!" 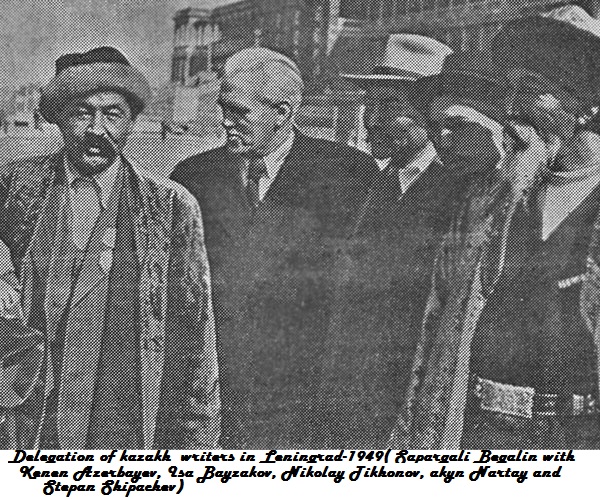 Begalin was awarded the National cohesion order, two awards « order of Badge of Honor » and medals of the USSR.