This year is the 20th anniversary of the British Council in Kazakhstan, and the 450th anniversary of William Shakespeare’s birth. To celebrate, the British Council and its partners Shell, Air Astana and the Kazakh National University of Arts are bringing to Astana a production of Hamlet by the world renowned Shakespeare’s Globe theatre. Performances will take place at the Kazakh National University of Arts - "Shabyt" Palace of Arts on 27 and 28 September. 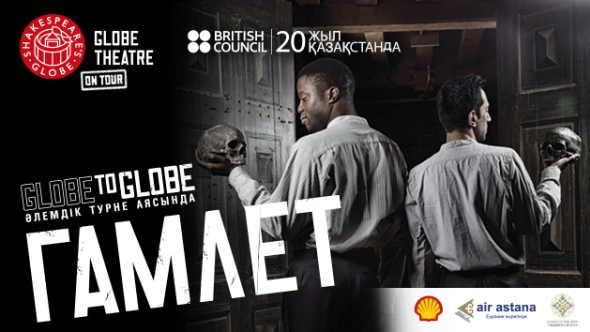 
To mark our 20th anniversary in Kazakhstan and the 450th anniversary of William Shakespeare’s birth, the British Council with support from Shell, Air Astana and the Kazakh National University for the Arts are bringing to Astana a production of Hamlet by the world renowned Shakespeare’s Globe theatre. Performances will take place at the Kazakh National University of Arts - "Shabyt" Palace of Arts on 27 and 28 September.

The performance is a part of a two-year global tour that will aim to take Hamlet to every country in the world. The Globe to Globe Hamlet, directed by the Globe’s Artistic Director Dominic Dromgoole, is a completely unprecedented theatrical adventure.

The production is a young, fresh version of Shakespeare’s classic tragedy of deferred revenge that teases out its latent streak of gallows humour and celebrates the exuberance and invention of its language. Just twelve actors will perform over two dozen parts on a stripped-down wooden stage in a comparatively brisk two hours and forty minutes.
The company will travel to all 205 nations in the world to stage Hamlet in a huge range of unique and atmospheric venues, from village squares to national theatres, from palaces to beaches. They will travel by boat, sleeper train, jeep, tall ship, bus and aeroplane across the seven continents.

The Globe to Globe Hamlet will reinforce the Globe’s continuing commitment to internationalising Shakespeare following the runaway success of the 2012 ‘Globe to Globe’ festival. During the festival 110,000 people – 80% of whom were first-time visitors to the Globe – flocked to watch 37 works of Shakespeare performed in 37 different languages over just six weeks. This new tour will bring one of Shakespeare’s best-known plays to some of the most inaccessible places in the world.

The tour will finish on 23 April 2016, the 400th anniversary of Shakespeare’s birth. This will also be the date of Dominic’s departure from the Globe, after a decade as Artistic Director.

Share:
Similar articles
#LITERARY NEWS
‘English Rakugo Show’ took place in Nur-Sultan
1684
#LITERARY NEWS
Astana hosts an Eurasian Literary Forum under a title “The Power of a Word in a Modern World” these days
3683
#LITERARY NEWS
It has been 93 years since the Union of Writers of Qazaqstan was established.
8854